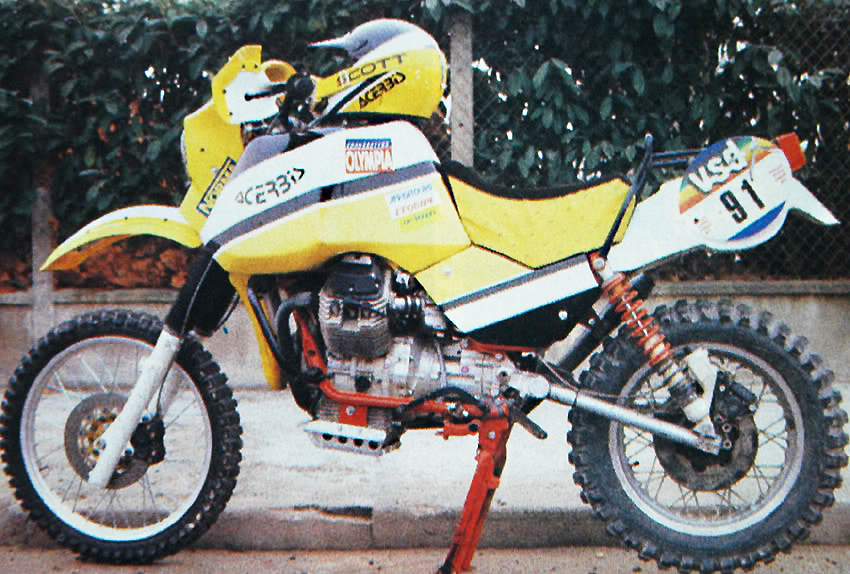 And’ but during the 1985 that a young architect from Bergamo named Torri looks to the ceo of Moto Guzzi, the rag. Davison, asking for a V65TT with the aim to join the world's toughest race. Davis is not enthusiastic about what, but eventually agrees, and because the Guzzi will officially, and because Torri is willing to share the costs of the adventure.

The bike was born and developed in the Mandello experiments andthe end looks a little to the V65 TT series. Long-throw suspensions, rugged chassis, engine preparation, tank capacity 50 liters made by skilled plumber in Mandello, solo seat are the elements of what will later be called V65 Baja, a motion by unusual history.

Provided for in a single copy, they will build 17, because the French importer demand 15. In fact, two of these bikes register with French drivers of the scuderia to the P-D 1986. The Baja will come one step away from mass production, and will also be presented at the salone in Milan 1985.

Unfortunately at the time of preparation of the prototype for the Dakar there were spoked wheels that could be found on the market to fit the final transmission of the V65, It was therefore decided to compete with the stock wheels, ending though to be the weak link of Moto Guzzi, they began to accuse spoke breakage due to lateral loads imposed by cardano in deep sand, forcing Towers to retire.

My Dakar 2005 by Lorenzo Buratti
Scroll to top