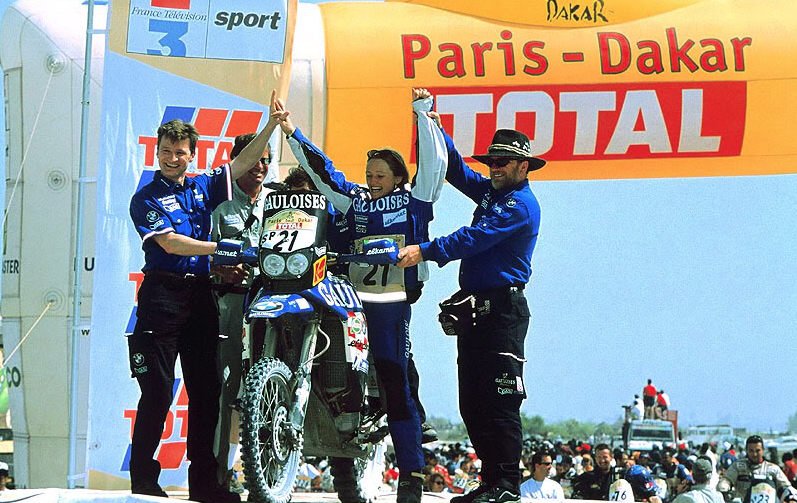 And’ been just over a month since the end of the South American Dakar, This year we have written stories of pilots daredevils who on their cars have challenged themselves looking for what is the thrill. The names of the pilots now, as well as that of the heroes who have written large enterprises, they are known to many real fans. However did you know that, as stated in a famous saying, behind every great man is a great woman and behind Stéphane Peterhansel, winner in category cars, There could be nothing more than a lifelong companion and adventure, a rider that with fierce and fiery passion he addressed fears and risks of the great African raid to experience those emotions that only Africa can give.

Andrea Mayer He was born in Kaufbeuren the 2 January 1968, After his studies, becomes journalist and is lucky enough to join his work to his great passion: the bike. Becomes an international correspondent for the trade press, profession that leads her to rest your feet in the land of the great deserts and enchanted landscapes where time seems to stand still: Africa, the country that has kidnapped the soul.

Andrea decides to pursue his dream and begins to compete in 1989 in European competition enduro, but soon his boots were filled with the sand of the dunes. After proving herself to be a fast driver and smart, get the engagement of the BMW Team in 1996, House with which collects almost all the laurels in female categories scoring some important absolute positions.
WINS in 1994 the Rally de l'atlas, in 1995 the Rally of Tunisia, in 1996 repeating the victory of the Rally de l'atlas and WINS his first Dakar, in 1997 repeating the IRIS in the Rally of Tunisia and makes his victory at the Rally of Dubai also conquering 1998 and 2000 and in 1999 he wins his last Dakar. His best finish ever arrives at Abu Dhabi Desert Challenge in 2001, a 6th place obtained in KTM. We also remember the 23rd place overall at the Dakar 2002 a noteworthy in the world's most extreme race.

We arrive at the year 2003, the year of change, where Mayer decides to follow in the footsteps of her partner deciding to ply the streets of Tuaregs no longer with two wheels, but with four. A decision dictated by pain and desire to live to enjoy again the pleasure of those enchanted places, because the desert had taken away too many friends and companions. Thanks to its experience in rally raids is enlisted in the squadron Mitsubishi taking off for Dakar 2003 and peaking at 4° and 21° place in the category T2 Diesel.

But it is the 2004 the most exciting year: Andrea driving his Mitsubishi as helping machine for prototypes of McRea, Aiphan and Masuoka, There is heart beat faster undermining the three bishops of the Japanese for the final victory. The final ranking will be placed at 5overall.

Her marriage to the car ends up in the 2005 with a retreat from that year's Dakar, and from the 2007 retires from the scene of the rally.
But the flame of passion turns off, stays asleep in a corner of our souls ready to come back to burn more than before and so it was for Andrew from 2011 – driving a truck assistance – following his teammate Stéphane Peterhansel in Dakar.
We also remember the participation in the Rally of Sardinia 2011, After 9 years after his last competition in motion, finished 23 overall and 1° by category.
Andrea Mayer a tenacious and cunning woman, a modern day Cleopatra Queen of deserts.

Villa: a bolognese with Dakar goal
Scroll to top