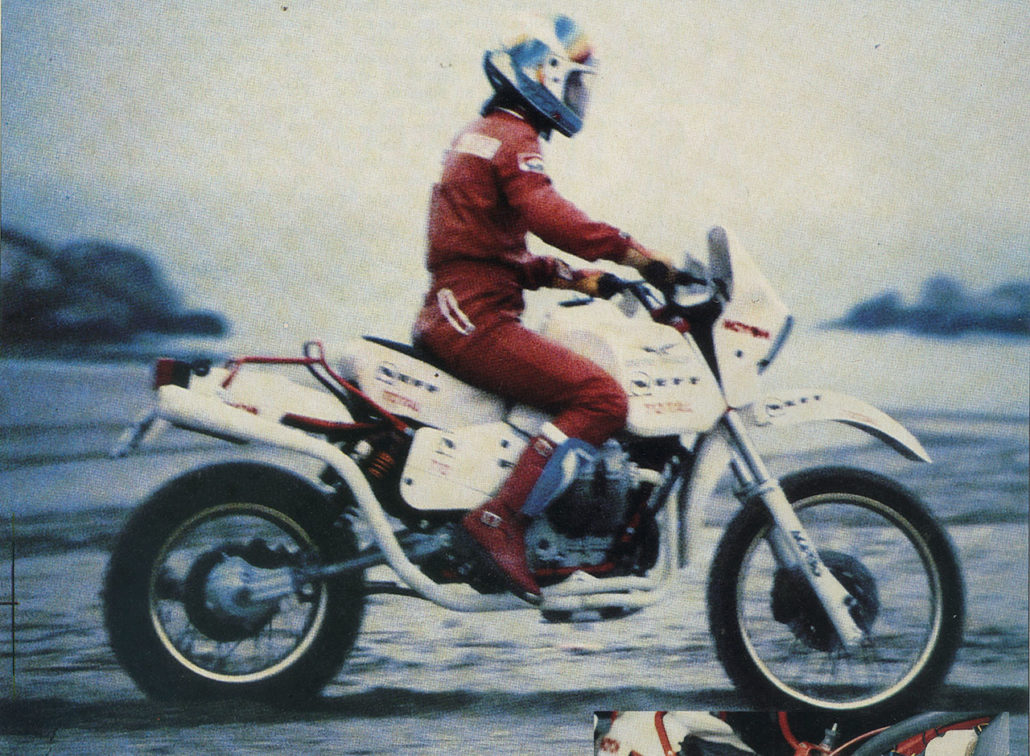 Ed: dutiful thought for those who provided us with this article, Pietro Manganoni is the true soul of Moto Guzzi at Dakar, as well as Bergamasco doc in the trenches at this hard time for his city and we all. Thank you.

Graziano Rossi test
Although the photos of this test will not be exceptional, fault of the gloomy and dark day, the opportunity to try the Guzzi today 750 Paris-Dakar is too gluttonous to send her back to who knows when. After more than 30 years the Guzzi re-enacts an "official" racing bike: this is a historic event and the just going up there has me a little’ Excited, how I should try it out for a Grand Prix. Instead I just have to go for a ride to the sea, to guide it on a bottom that looks like the desert, which will be the field of action, next January, of this all terrain that we hope will be the first step towards a great commitment, a great return to the sport of the house of Mandello Lario. For the next Paris-Dakar la Guzzi has prepared three mo-tos that will be led by two French. Drobeck and Rigon, and from the Italian Torri. The entire organization of the race is entrusted to the team of the importer French. 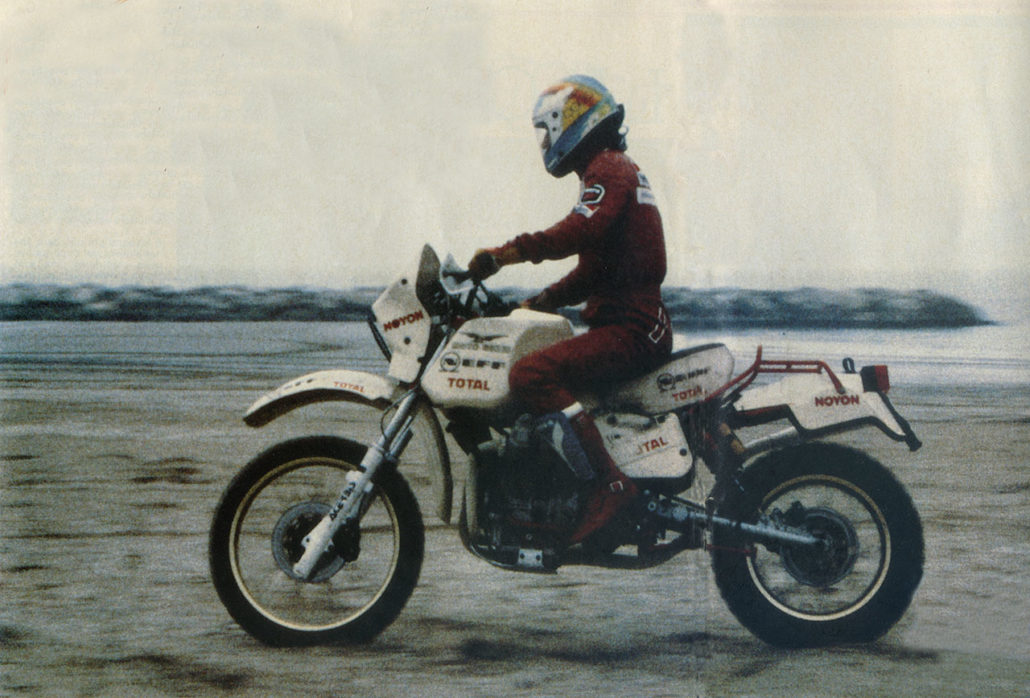 IN SELLA – I go up to try the trim and I have a surprise: the saddle is exaggeratedly high and I can't touch it on the ground except leaning on one side; I go down to set in motion: the starter is pedal and fortunately the position of the lever is low and easily accessible. In fact, he leaves now; I leave the clutch slowly with the first and I run him a little’ behind, then, when he took some’ speed, I jump over him! It's the most comfortable way to go! Later, when it was disassembled, I found that the saddle has 10-15 cm of padding and I think you could leave it alone 5 to be able to climb more comfortably and not have to ask for help whenever you have to stop. Once you've left, Guzzi discovers his cards and they are truly remarkable. 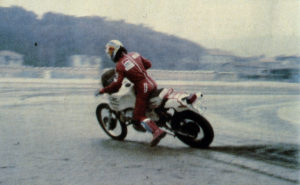 I start pulling more and running even on the soft sand, curve-back flat, strong and sideways, pulling the gears, to brake hard, to start again with a low gear, to jump on an artificial bump prepared for the occasion with an axle stolen from a hibernation boat near them.

FULL-TEST MANEUVER – Two features seem exceptional to me, and they're very important: handling and couple. This bike, although at first glance it is of "immense" size, surprises by the ease with which it bends and straightens, also going very slowly, thanks to a really low center of gravity and a low weight: 165 kg dry weight. In the sudden jump Guzzi performs decidedly well proving to be very well balanced as weights. I didn't really think, with a mo-to of this aspect, to drive as with a normal Enduro. Then the couple: it's true that the engine doesn't have much stretch, but with any gear, in any condition, the strength of the first 3-4000 laps is exciting! Even the narrow drift, you should do in the second, it doesn't even create problems to do it in the third or fourth. Also the engine I'm testing already has a lot of miles of testing and is quite spoofed, when it's time to leave for Dakar he'll be much fitter!

SO MUCH MORE COUPLE It doesn't turn very high because the compression ratio was brought by 10:1 in 9:1 to have a lot of torque and especially because the engine does not suffer from gasoline with octane po-chi that you can find along the way. The maximum achievable speed is 170 km/h and the two ohlins shocks with 130 mm stroke, allowing a hike of 270 mm and the Fork Marzocchi to be 42 mm with external adjustment 280 mm travel, they manage to give the bike precision and stability even when in the fourth or fifth full we come across endorses or bumps that we had not seen.

THE ENGINE – Of 750 cc is a four valve that develops 60 CV to 7100 RPM, is equipped with a radiator for oil cooling and the carburetors are Dell'Orto 30 mm with shooting pumps; full tanks, 38 liters the normal plus an extra one under the saddle from 12 liters, Autonomy is of 600 km. The gearbox 5 gears is very accurate and well-related and the cardano transmission does not give any problem for driving, no tears even in the most exasperated changes. It is to be of great advantage not to have the chain, who in constant contact with the sand needs a lot of maintenance and is still in danger of breaking. The brakes are Brembo: a floating disc 270 front and one pierced by 250 at the rear. The tires are Michelin Desert, 17 thumbs behind and 21 Before, with the "bib-mousse", instead of normal inner tubes, which are full rubber sausages mounted inside the tires to avoid punctures. The instrumentation com-takes the counter – Odometer, The Oil Light, the "trip-master" and the equipment to slide the "road-book". Instead the compass is not on the bike but it is the riders who bring it. Well, I'll make one last tirad, one last jump and it's already almost dark. I think this Guzzi has a lot of potential, can be among the protagonists of the African adventure and give great satisfaction to those who wanted it! Mr. Davison, responsible for Moto Guzzi, said he hopes for an honorable debut, maybe to end up in the first 10 and maybe, but he didn't say that, to rediscover what the name Guzzi meant in racing 30 years ago! G.r. 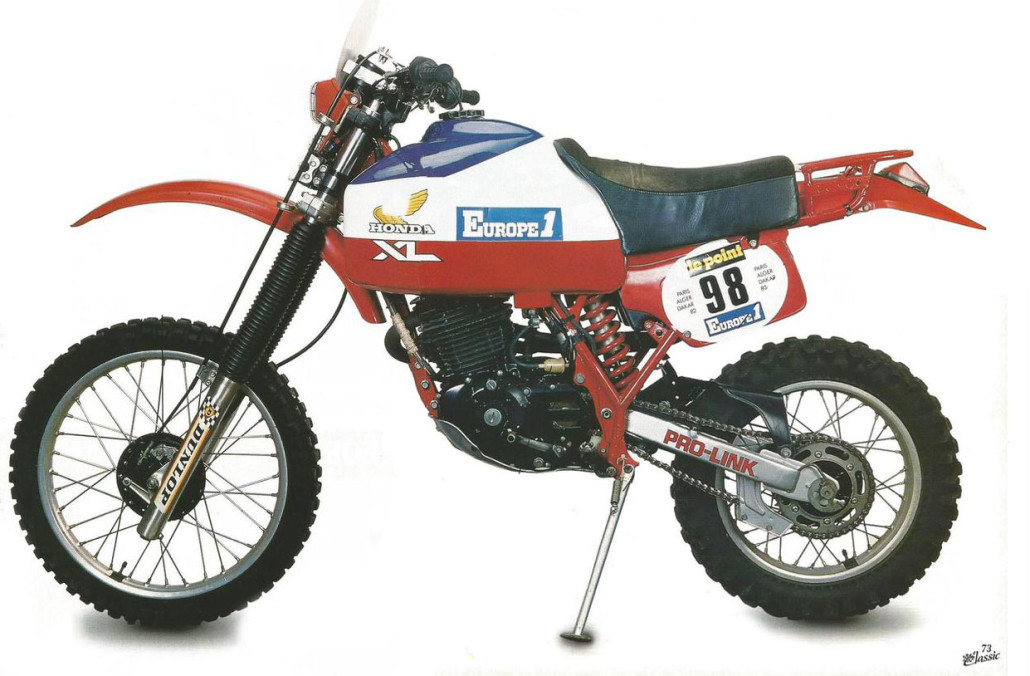 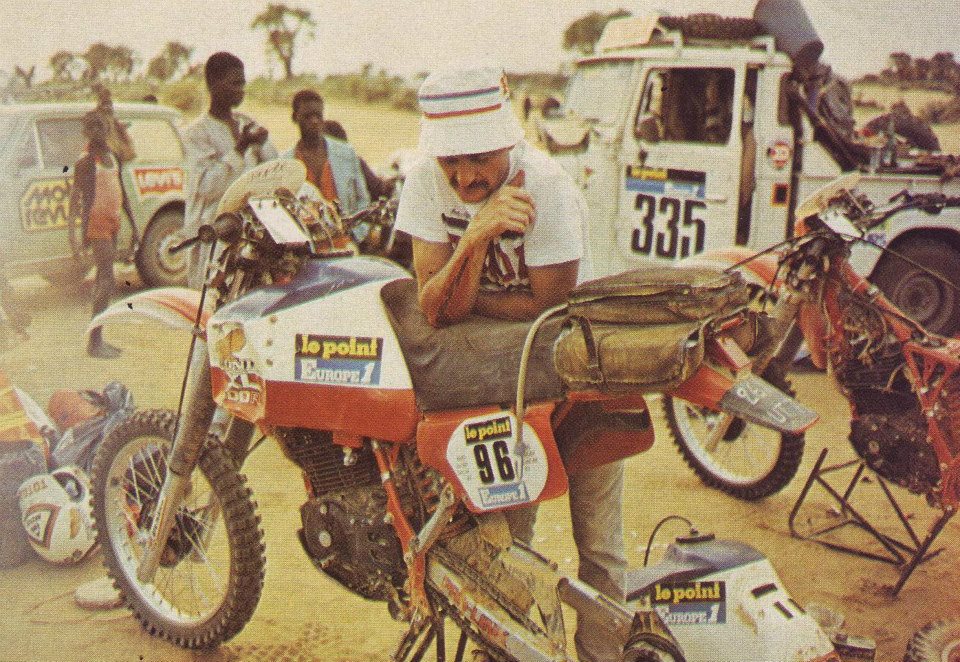 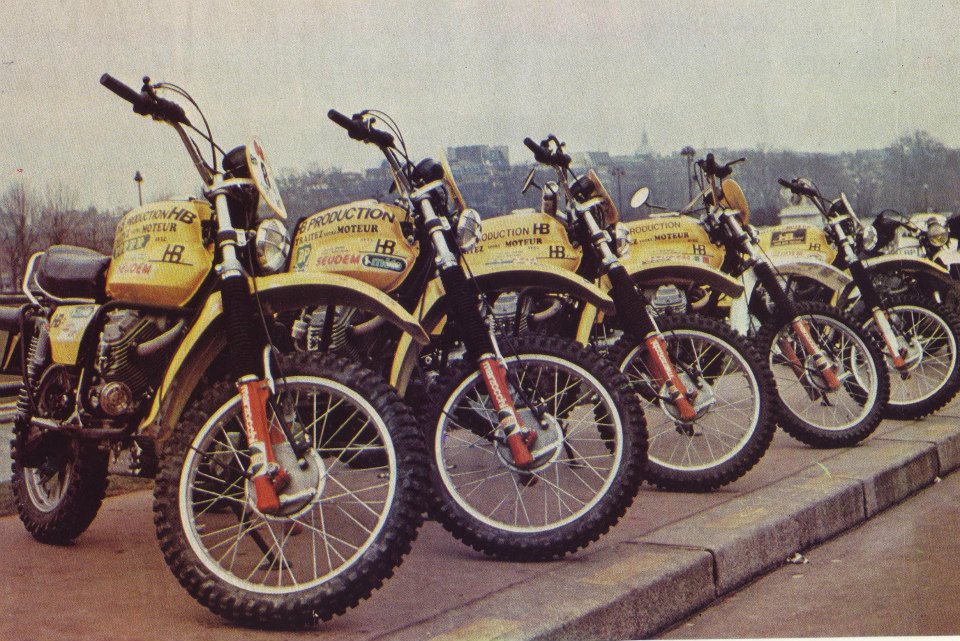 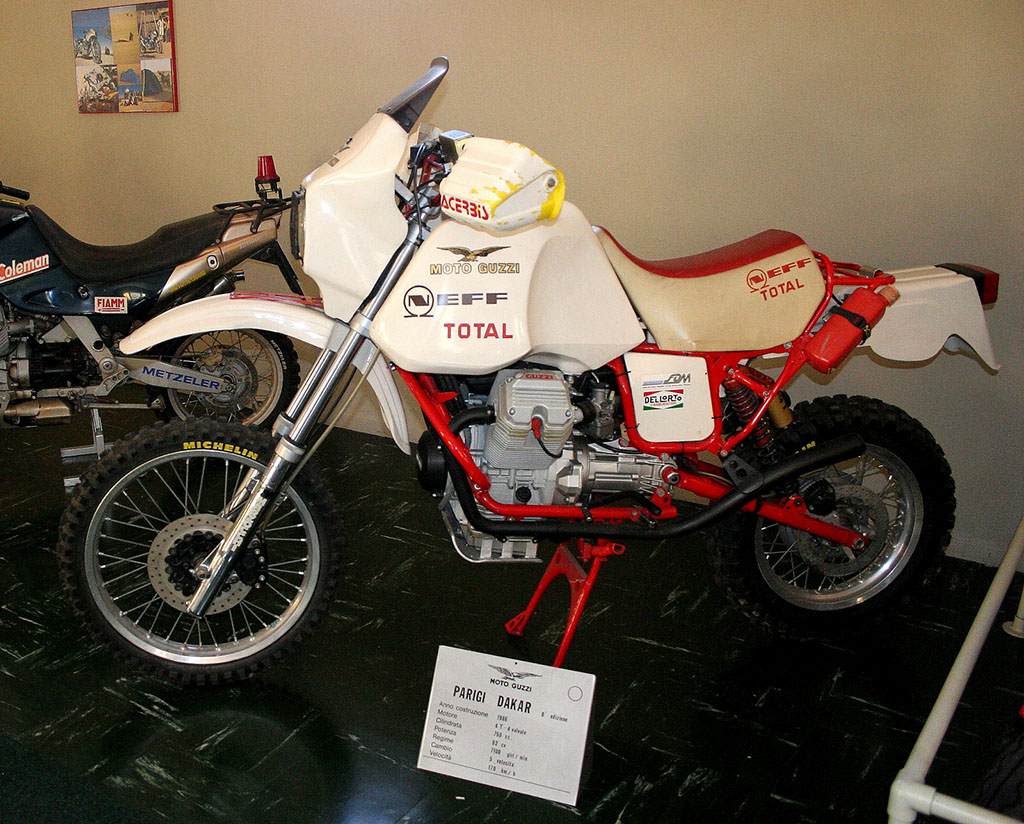 And’ the 1986 and at the start of the 8th edition of the Paris Dakar also involves a host of Moto Guzzi notoriously thick card, engine 4 valves of V75 and about 62 BHP made the bike of Mandello del Lario to achieve 170 km/h.

Official team followed by the French importer, the pilots were the Italian towers and the French Drobecq and Rigoni. The bike seemed to be having a good potential: You comportatò well in the prologue, but then he was plagued with reliability problems. In parin particular suffered from frequent transmission problems, especially the gimbal probably undermined by the kinematics of the suspension.