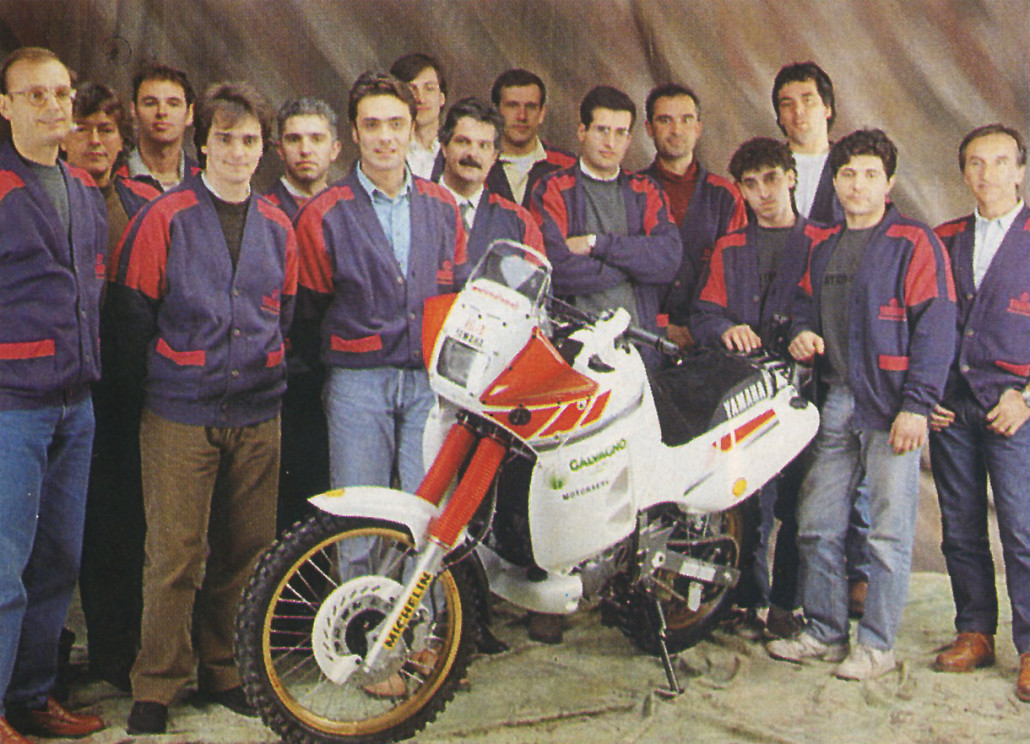 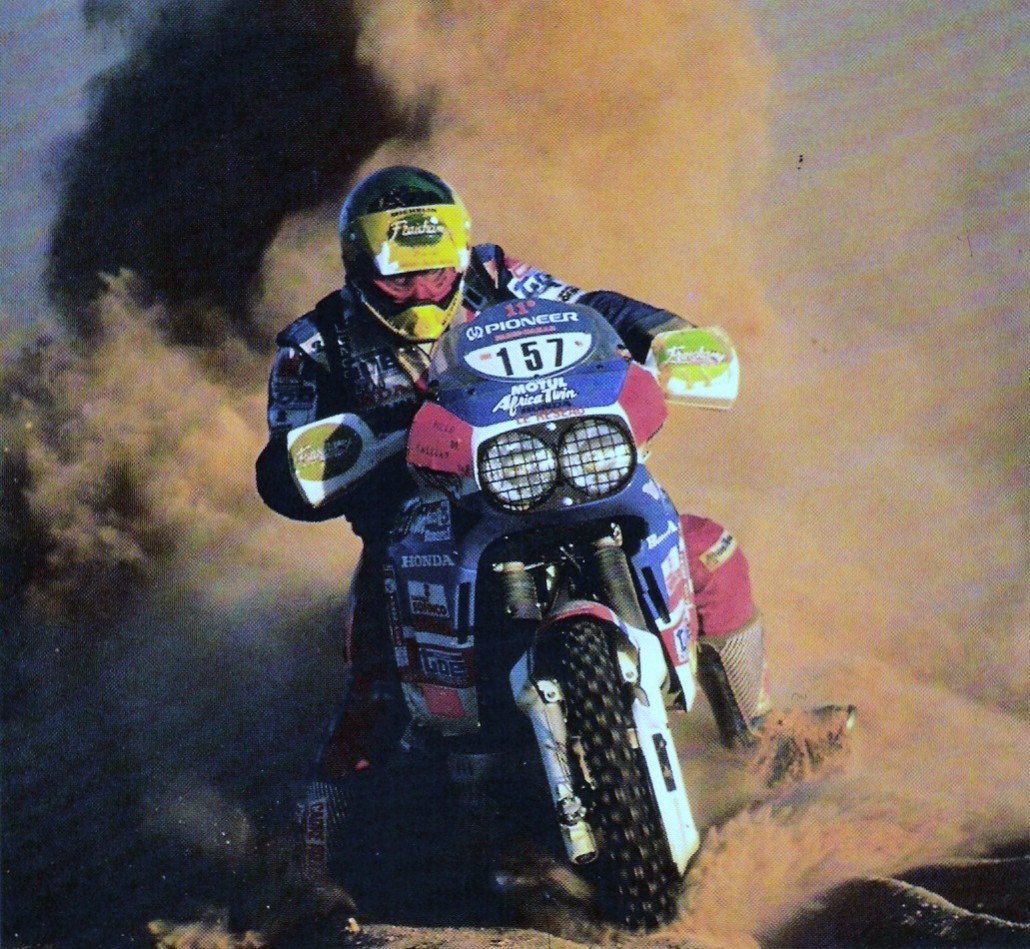 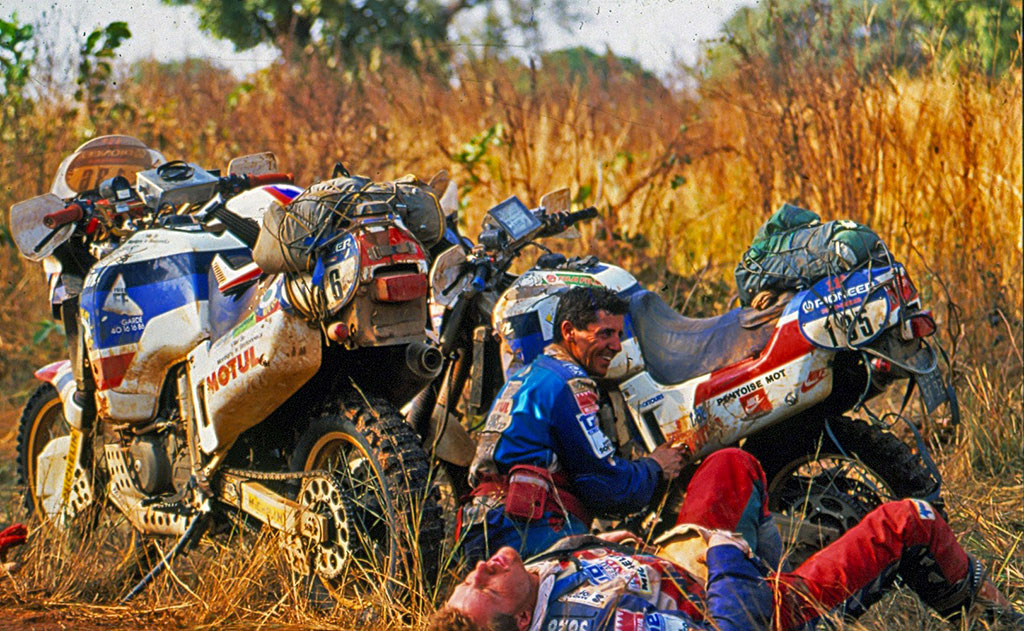 Many have asked us to speak of those heroic individuals who at the end of the years ' 80 attended the Dakar on a Honda Africa Twin little more than standard. We asked Gianpaolo Banelli to www.nightwings.org to tell us something more.

In the late 80 's it was possible to run the Dakar in the category «Marathon» with motorcycles derived from the series and adapted to the race. For this reason, and also to make up in some way to the next withdrawal of official Honda Rally (After 4 victories at Dakar), on the occasion of the Edition ' 89 Honda France, through the Director Jean Louis Guillot, launched in the fall of ' 88 the operation "50 Africa Twin in Dakar". A first selection was made between 150 candidates and were chosen 50 that were given as many specimens of Africa Twin 650 particularly cured in order to run in the category «Marathon».

Meanwhile was prepared the bike, a Honda RD03 650 already near final made a fine figure at Pharaons Rally 1988 in the hands of Joel Daures (He had run the last Dakar with the NXR officer). 49 bike started then for 11a Dakar; Alsatian Heintz saw its participation cancelled a few days before departure, When bike and gear Honda France had already been purchased, because the Libyan authorities did not accept her entry into the country as belonging to the French army. Among the starters also have a young Oxford shoe, Alex Lacombe, But even an Italian (Roberto Boano) and some riders of other nationalities (Spain, England, Senegal).

The serial numbers of these 50 motorcycles were starting to 5 How about RD03 standard (Hence the need to be true experts of means to recognize the true Marathon of false and Tarot).Normally for the Dakar a number of parts of the bike were punched and numbered with the same race number of pilot, to prevent them from being used unauthorized parts, This should help. The operation had some success: 18 At concluded the race and Patrice Toussaint (16th overall) and Patrick Sireyjol (just behind him) they finished the first two places in the class Marathon, with our Roberto Boano 4° by category.

The following year, for the 12th edition of the Dakar rally, they were then set up other 50 bike, slightly different from previous series, marked by a number of different frame that starts to 6 (from 600001 in 600050). Twenty aircraft were delivered in France while others were destined for other countries, at least 3 in Spain. Only fifteen of these machines reached Italy, in mid November ' 89 and then for many too late to join the rally. At least one was driven at the last moment by Ermanno Ban (49th overall in the Dakar 89 with a Yamaha) but he ran a few steps and then run into a serious fall, that forced him to immediate hospitalization in hospital and to leave the vehicle in Libya (where was seen years ago by some tourists!).

Spanish Antonio “Toni” Boluda, he behaved very well, resulting 18th overall in Dakar ' 90 and winner of the Marathon. Asad Maher ran the Pharaohs ' 90 with one of these bikes, entrusted to him directly from Carlo Fiorani, then responsible for HRC (that is returned for a while’ After the Ferrari experience). Also very few specimens were built in ' 90 (It just seems 8) «Marathon» 750 but during the Dakar ' 91 were “clean up” in class Silhouette, because they had a single disc front brake instead of 2! Great though the provision of Boluda and Boano, respectively 10° and 11° in the absolute and behind our Luigino Medardo among the Silhouette! In Marathon Dakar still ran some 13a RD03, including the one entrusted by Fiorani to Ban, recovered from the accident the year before thanks to the care of Dr. Costa, those of our Paladins and Nassi, and another dozen, of which unfortunately only to Sireyjol came to the end. 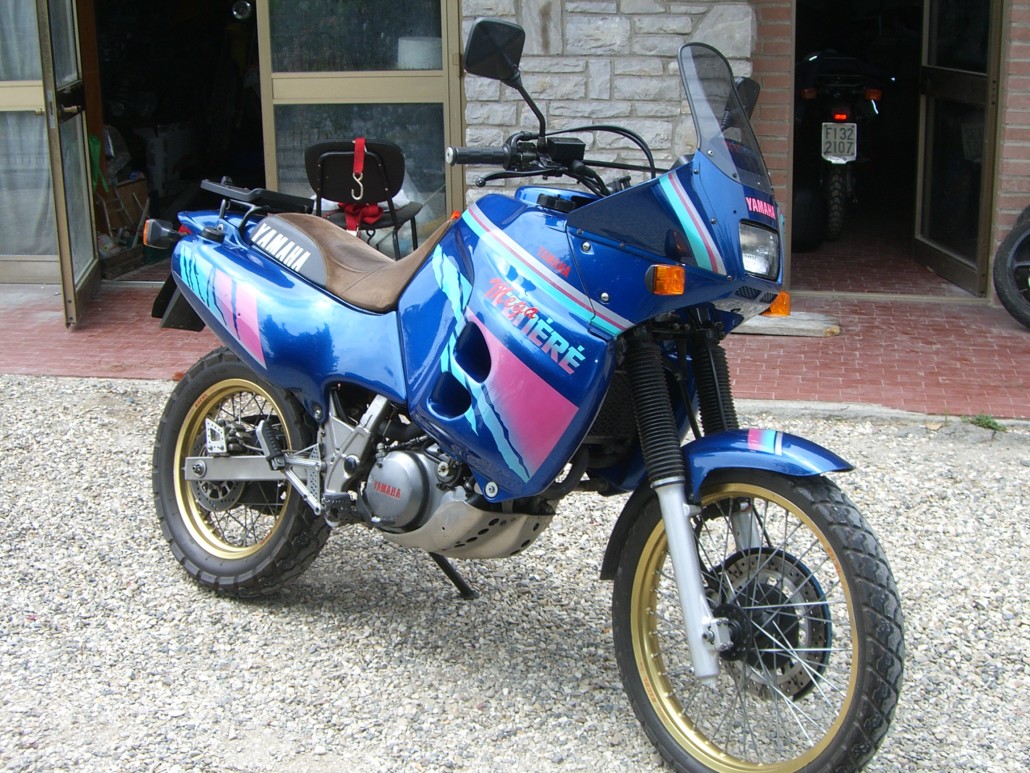 Transformations rallying marketed by Belgarda for Yamaha XTZ 660 Ténéré have been taken towards the end of 1991 (After the official presentation of the Ténéré 660); they were designed to make the new bikes adapted to African marathons; BYRD was a project made in collaboration with Acerbis that has materially polyurethane netting tanks product.

Beppe Gauri busied in the various tests of motorcycle equipped with the new rally kit.

In the book of Paris Le Cap 1992, are listed 31 XTZ 660, but from the documentation registered motorbikes BYRD BYRD-Italy were 7, plus three strong torque 750. The French have entered 6/7 with France-blue and tank configuration as the marathon then sold.
The Italian team would be composed of three or four bikes in addition to the seven directly addressed to BYRD. The kit Marathon consisted of many parts and each one could be mounted without necessarily buying the complete kit. The BYRD provided together with pieces, the manual in which they explained all the steps for the installation of various components.

The bike was bought by Ettore Petrini of Bastia Umbra (PG), to take part in the Paris-Le Cap of 1992; his race number was 55 (Fabrizio Meoni the same year ran with the 56 with a Yamaha Marathon identical to Petrini).

Ettore Petrini will withdraw from a fall during one of the first stops in Africa. The same Petrini had participated in previous editions of the Paris-Dakar with mixed success (remember his 42 ND place upon arrival of Dakar 1990). His Yamaha is now owned by the Dr. Livio Fioroni, a collector of Perugia that bought it a few years ago; the medium is in excellent condition even if you removed some accessories typically rally drivers (instruments and other small components) and you have performed a painting that gives the Middle a livery close to Yamaha France officers following years; the current features of the medium allows for a particularly pleasant street use with the awareness and satisfaction of being aboard a medium who took part in the world's toughest motorcycle race and fascinating. A feature that enhances the interest of this medium: still has all the hallmarks of Paris-Le Cap of 1992.

Text and photos Up F