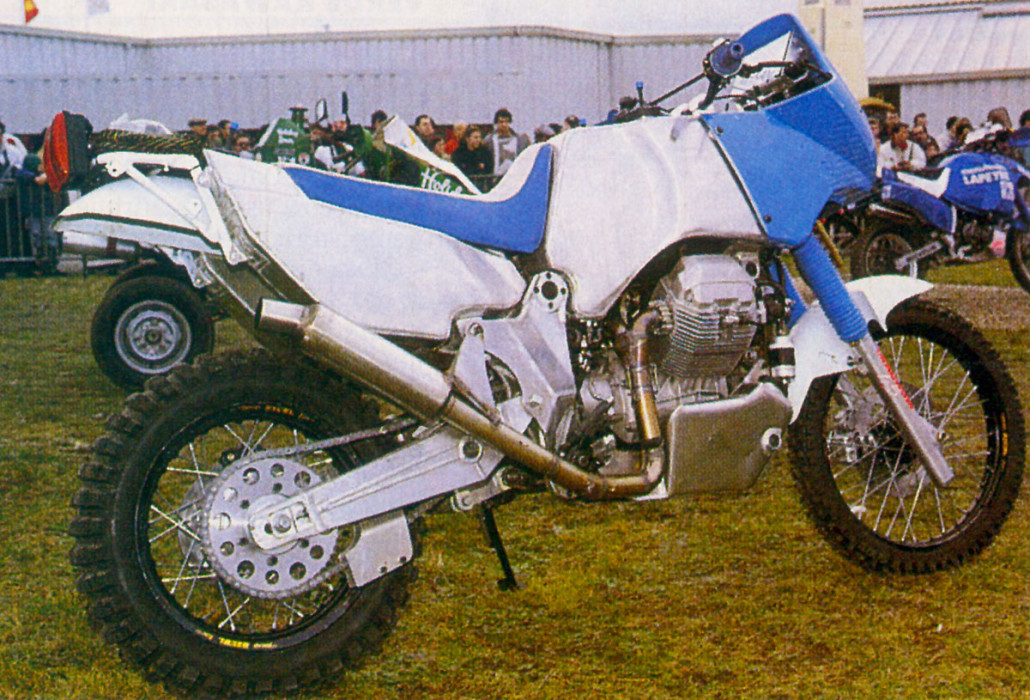 As for courage Claudio Towers wasn't kidding, Thirty-nine (in 1991 NDR.) Architect from Bergamo departed from Paris while riding a Guzzi himself fully designed. If you exclude the engine on his bike not retained much from the image template: the chassis was made of a thick aluminum beam with two triangular slab track in the heart of the swingarm, and the lower cradle that also acted as water tank.

On the frame made from VRP Towers he mounted a motor Guzzi 940 identical to that of the SP model but with the electronic fuel injection instead of Carburetors the cylinders upside down, with the drains backwards.

"But it was a mistake – He specified Towers – I did so to get the weights more centered, only in this way the waste coals too and became even hot. Among other things I mounted electronic fuel injection in California without changing the mapping because I had the time, and I had carburation problems. But I worked also on transmission: It was my final is the first Guzzi chain transmission, and I realized a bevel gear to remove the output shaft drive».

Even with a lot of work though the Strict, This is the official name, it weighed 207 kg: no small, but less and less of the Africa Twin. Towers had already planned to realize a new, lighter and with the motor from 750 cm, with that dispute the next Rallye des Pharaons. Because, means, did not change its intention to remain faithful to the Mandello Eagle.

With the twins lariane has already participated in four Dakar without carry to term no, and it decided not to give up.

"I cannot run with a Japanese I won't use Italian money to advertise to strangers. And then the Guzzi's legendary. To a Japanese would pass unnoticed, with a Guzzi is definitely something else, even if you happen to stop already the first day».

Exactly how much he: was walking in the first special, the Ghadames in I.d.r.i., and there came more to the field, probably picked up by truck fuck. No spare parts and assistance, not even attempted to repair her Severe. Maybe that year failed even to achieve its primary objective:

«Only start to get is an understatement, see Dakar can be a rewarding, but I don't care. My goal is to have fun, being able to entusiasmami for the things I see and test the solutions that I myself have studied».
That time lasted much too little to amuse him.