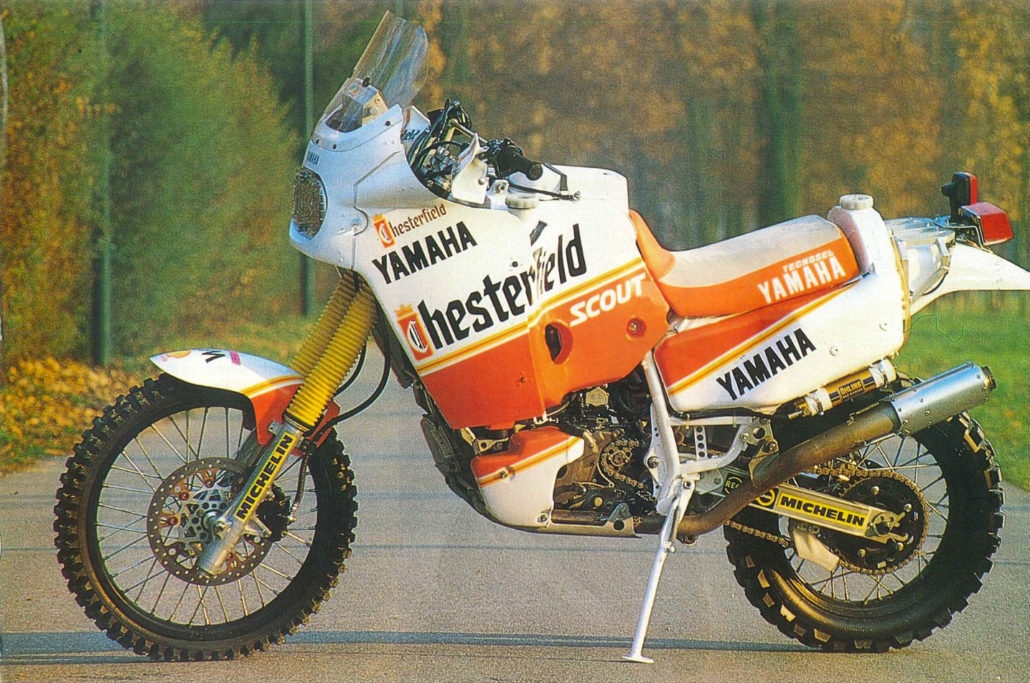 Insiders say the race, on the beach in Dakar, It doesn't end, but begins. In the sense that the losers, But even the winner, just crossing the finish line Let's start already thinking about the next edition. Behind the three-week race, In fact, There is the work of a whole year. But how does this work? As you work in “bunker” Racing divisions when the desert is back on silence and the wind has obliterated the footprints of tires from sand? To answer we checked into one of these departments ran (usually strictly “top secret”), one of the newly formed BYRD, (Belgarda Yamaha Racing Division), “daughter” Italian importer of Yamaha, that takes care of all the racing activities of the company.

The team has the credentials to be among the protagonists of the marathon and she collected many successes in the past in Africa with strong Franco Picco, second in Dakar last year and winner of the Rally of the Pharaohs in 86, and with Cyril Neveu, winner of five Paris-Dakar. Daniele Papi, Managing Director of-BYRD and head of African expedition, tells “Motorcycling” as the team prepared to “Dakar”. The rule of “Paris-Dakar rally which starts on the beach in Dakar when ends the previous edition” PAPI confirmation: the leaders of two official Yamaha team, the Italian Belgarda and France's Sonauto, gather together with observers sent by the Japanese parent a few hours after the end of the marathon in a private room at a hotel in Dakar. 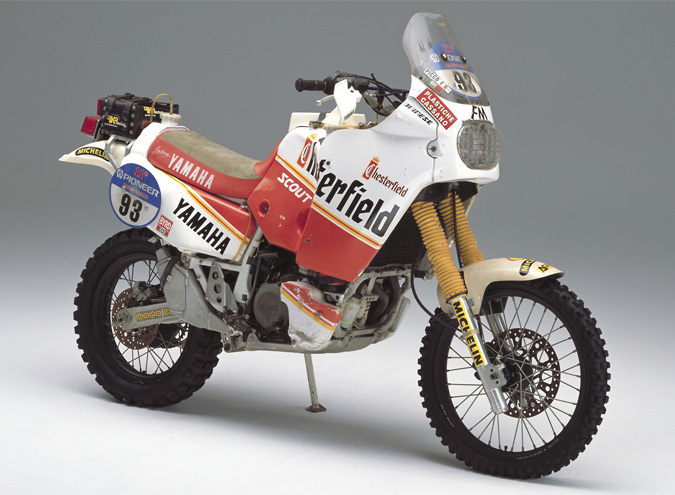 The discussion, sports only cutting, need to analyze the progress of the race and has followed the week after, at the headquarters of Yamaha-Europe, in Amsterdam, where you decide the address of competitive activities of the three teams — French, Italian and Japanese — while in Europe you disassemble and inspect all parts used on motorcycles who finished the race, in Japan we lay the foundations of the project for the construction of the new machine. After a few months, completed the analysis of the materials used and the strategies of the next edition (number of motorcycles in the race and its assistance), starts the phase “hot” the preparation: mechanics and drivers flying in Japan for the first tests of the new medium. This last phase lasts between 30 and 60 days and is undoubtedly the most interesting: It is here that the prototype takes form and is changed according to the recommendations of the pilots, recommendations taken into great account of Japanese technicians.

The new Yamaha OW94, Thumper of 750 CC., in first exit at the rally of the Pharaohs finished second with Franco Picco. Digitalis is placed in the tail of the bike, away from the engine that could create abnormal magnetic fields, the reader is at the side of the road book. 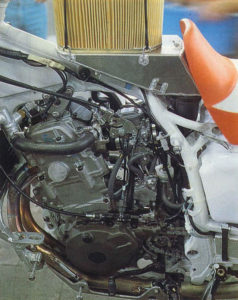 Our peak, in particular, enjoys fame as expert test pilot and the Japanese are doing everything to please him making changes that suggests. So we arrive in September, When you debug the participation to the Pharaohs, dress rehearsal of “Dakar”. The bikes come from Japan and intensify testing of parts produced in Europe, for example the rear shock (Ohlins): in the race, then, you will experience the new solutions.

Upon returning from “Pharaohs” life gets hectic: expect from Japan the new bikes, amended in accordance with the experience of the race in Egypt, bikes arriving anco-ra to assemble and check. The last test was completed a few days before departure for Paris. Janice Bailey, Head of external relations of the BYRD, It acts as a guide during your visit to the bunker. We begin with the presentation of full-time employees • mechanical Racing Division: named Fumagalli, Lanzulli and sinks, While completing the Paris-Dakar Bonetti (that follows Fain in cross) and the specialist bodies Vafaie. The new regulation, prohibiting participation in the truck and that limits the number of support vehicles, He forced all the major team to review the Organization of assistance in race. 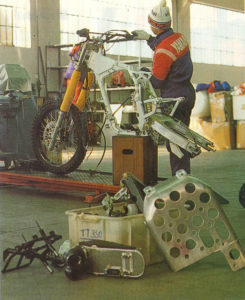 The 70 percent of spare parts is carried on cars and trucks, the rest being parked at Agadez, in a permanent base Yamaha. The tires needed a race like that between moto, cars and trucks are almost two hundred (an idea of the total cost may give it the price of a special rubber for trucks, 2.500.000 Italian lira). Motorcycle tires are replaced each end stage: the Special “mousse” (Michelin) that substitute for normal air chambers prevents punctures, but it has a limited tata resistance to high temperatures that occur in stressed tires. The three Range Rover (participating in the race) take care the parts most commonly used screen on the slopes, a motor mounted, a tank, a complete wheel and obviously a mechanic can assist the driver in case of failure.

By the time the team also includes a woman, the only between 23 men: It's called Matilda T, 30 years, Image Manager Chesterfield. All 24 people on your team are involved full time, in the year, the field Raid Marathon, but quantifying the human force needed for the conduct of the entire project is impossible. All employees of Belgarda are co-involved and collaborate with the racing Department even if only intermittently. The pilots, as well as conducting the tests, follow the set up of the bike to be able, during the race, repairs of luck. The pre-race physical preparation, always followed by the head doctor, the profes-sor Bows, includes, during the month before the race, 3 weekly bike trips, 4 jogging sessions, 3 gym (2 read and one with maximum loads), a day at the pool and a complete rest.

Archetti believes that athletes use doping, in African marathons, Since it is impossible to, in an effort so prolonged, dispose of the remaining negatives of such substances, and a pilot who would use would remain a victim of the accumulation of fatigue. Talk about costs is virtually impossible. In addition to bike, estimated value 300 millions of lire una, the means of assistance, aeroplanes, dozens of people leave, the thousands of hours of work dedicated to the project, We must consider the occasional engagement of all employees and other dozens of people Belgarda (photographers, suppliers, etc.) who collaborate to the realization of “African dream”. 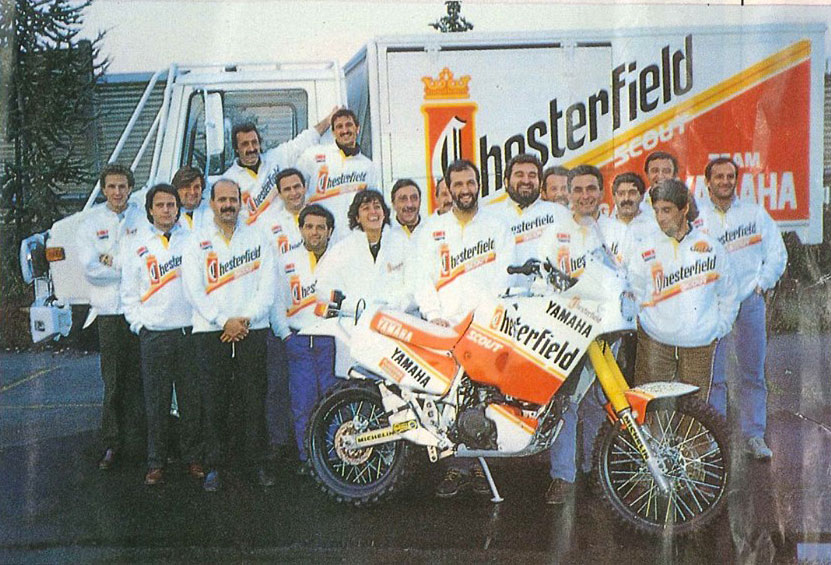 Peak and Neveu will be in charge of two new Yamaha OW 94. Driven by peak at Rallye des Pharaons, the OW 94 is the evolution of the OW 93 entrusted to Mad and the fourth rider. Identical in design, the new Yamaha differ in reinforced frame and a modified suspension in linkages and length of the swingarm; the engine is different in the heating unit (piston and piston rings of new material) and has larger carburetors and has a higher compression ratio. 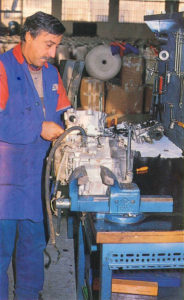 The candle is now only, in place of the previous two, the power is 60 HP, two more, but mostly the consumption decreased. 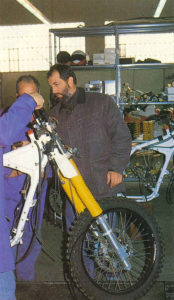 Autonomy is entrusted to two tanks, side main, a total of 58 liters; the weight of nearly 220 kg in running order and the maximum speed is over 185 km/h. The instrumentation, In addition to indispensable roadbook, includes a trip master tech, digital and analogue magnetic electronic compass of reserve. After his second place in last edition, second place at “Pharaohs”, the official Yamaha, entrusted to the French team Sonauto, is a top candidate to victory . 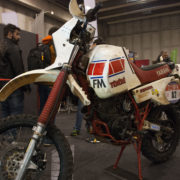 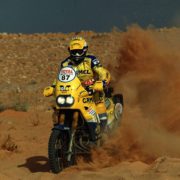