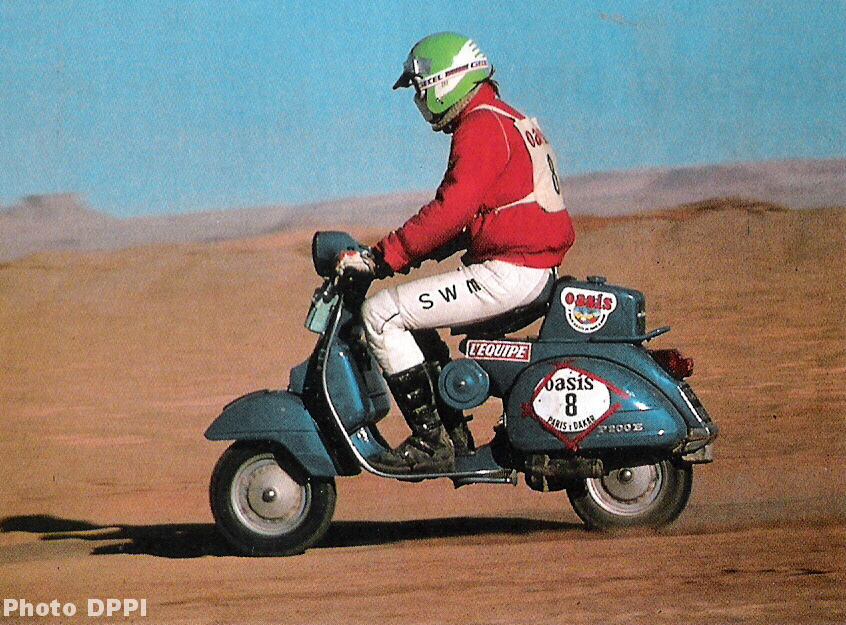 One of the most courageous moves in the history of the Dakar is the annals of Edition 1980: Jean François Piot, Honda team manager during the first competition occurs at the start with a team that stirs uproar, and this time win it doesn't even cross. His goal is to simply finish the race. Critics judge sarcastically and joked about the project: bring to the finish line of the Lake Rose four drivers on 4 Vespa 200 CC.

The team consists of pilots destined to be stuck to short giornp scooter seat, and probably even at night: Tcherniavsky brothers, Bernard Neimer and Marc Saini. Accompanied by two Land Rover assistance entrusted to specialists, Trautman and three-time winner at the 24 hours of Le Mans, Henry Pescarolo.

Their task is to assist the Vepa on the track of day and, possibly, retrieve them and bring them to the bivouac at night. And so it goes on the run of “forced” on which Sabine sometimes is forced to turn a blind eye and forgive an interpretation too elastic to Regulation. But in Dakar two Wasp they finish running after ten thousand kilometers of real suffering: those of Bernard Tcherniavsky #6 and Saini #8

Never again the Dakar was attempted an undertaking of the kind.
Source Batini