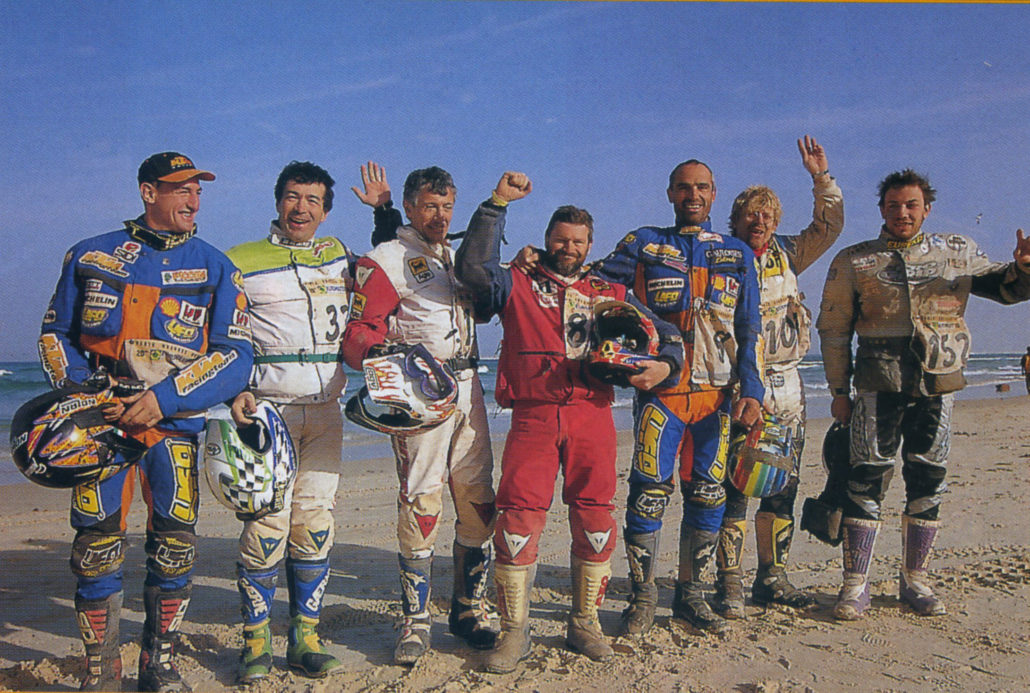 And’ was the victory race – the number 6 and a record – announced and discounted Stéphane Peterhansel and his Yamaha 850 twin-cylinder. If for the driver French there is the satisfaction of having overtaken Cyril Neveu, standing at 5, for the Japanese company is the number 9. And it will probably be the last since Yamaha has announced its retirement from the “toughest race in the world”.

Leave space for single-cylinder, KTM and BMW, Probably, Honda's return. In fact, the supremacy of this fantastic duo has been very evident since the beginning of the race. Let your spirits in Europe, stages in France and Spain where the approach to Africa was a routine fact rather than a real race, “Peter” has quickly accumulated a considerable advantage, a detachment that he was able to administer with the usual intelligence in the second week.

Only small uncertainties in a triumphant path: some fall, slight technical problems with the fast-moving twin-cylinder Yamaha XTZ 850 Trx; In short, nothing that really could worry this great champion who could, though, no longer lining up at the Dakar with a motorcycle: "If Yamaha leaves – so he said on arrival – abandonment too. I'm too tied to this House to accept another offer. I could only go back to Africa by driving a car.". 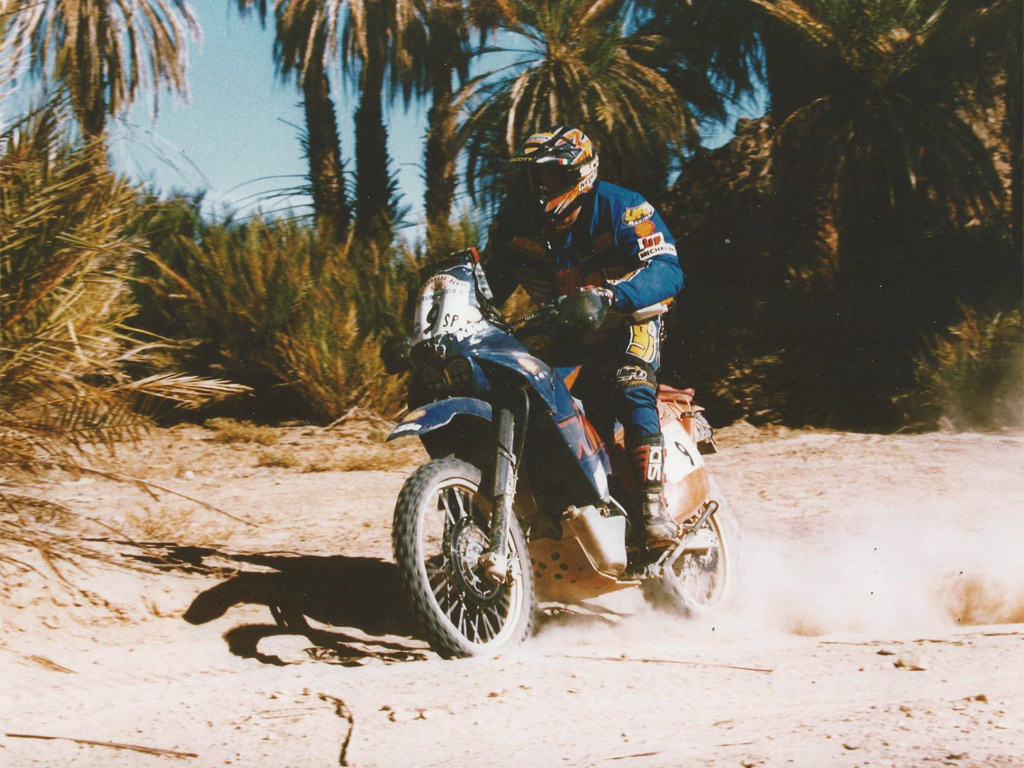 He tried to undermine this overpowering KTM squadron.: a kind of motorized army run by the former pilot Heinz Kinigadner, made up of ten official pilots and a large number of private. The KTM LC4 660 they couldn't withstand the same pace as the Japanese twin-cylinder but they defended themselves very well by winning most of the special tests (12 on 19). On 55 pilots arrived on the beaches of Dakar well 31 they were riding a KTM.

Although Peterhansel was unapproachable – the same men of the Austrian House say so – having placed Fabrizio Meoni behind him, with a not-so-impossible detachment on 18 race days, it was a great performance. The Italian driver was the real opponent of the French: careful in navigation despite the continuous malfunctions of its GPS, a real hard man in enduring his 40 years and then the injury to the left shoulder, able to find the right way in a sandstorm and to be able to get to third and fourth place in the Dakars of '94 and '95.

And even he may no longer be kicking off next year since, despite being a “Official” to all intents and purposes, doesn't have a contract with KTM that protects him for the future. Returning to Italy he found his everyday life and a motorcycle dealership to run. Behind him, always with KTM 660, Andy Haydon, New York an Australian driver definitely used to the big spaces and already at ease at the first Paris-Dakar. And then a South African, Alfie Cox, already a valuable pilot in the enduro. These two pilots, beyond their very good ranking, demonstrate how even novices of the African marathon can assert their skills in off-road driving. 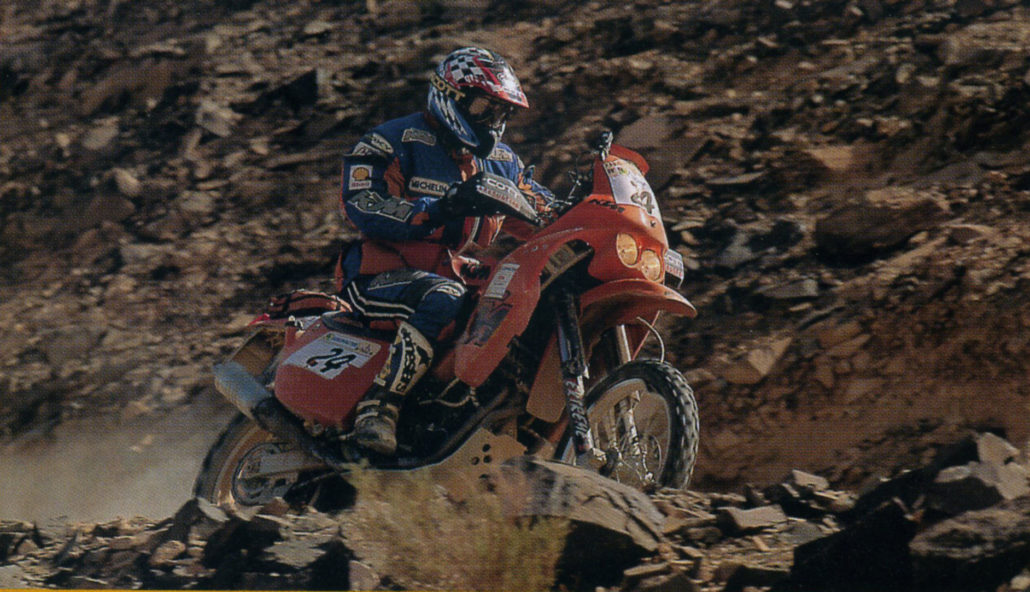 The lack of real tra traps in navigation has therefore brought out those who really go strong outside the asphalt, that is, enduro pilots. Let us not forget that Peterhansel himself is a protagonist of the World Enduro. Even our “Giò” Hall, several times iridescent in the category, went very strong, turning the race into a very long mule track. He placed 17th due to some road-book reading errors and some Ignition problems in his KTM. He also risked not finishing the race alone 2 km from the arrival in Dakar for a fall that left him unconscious for a few moments and with the bike almost destroyed.

OTHER ITALIANS Honour also to the other Italians who finished the very hard race: 24th Guido Maletti (Ben 11 Investments) With the 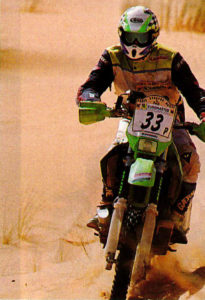 its Kawasaki KLX 650R, but he could have been higher in the rankings if he hadn't taken the nine-hour flat penalty for the electronic ignition malfunction. He did not lose heart and continued to rise in the positions. Gian Paolo Quaglino and his Honda XR400R ranked 29th. Quaglino is at Dakar Number 5 and it's the third that ends. Right behind, Aldo Winkler with the KTM 660. And’ one of the veterans with his eight holdings. The Turiner wins the fair-play award because, like a gregarious old, he generously gave to Giò Hall, blocked by electrical troubles and “Official” KTM, the spare electronic control unit of his Kappa.

And then it comes Roberto Boano (38but with 47 years behind), once a well-known crosser and now known as jarno and Ivan's father, much more than young hopes of the enduro. Made the Dakar with the trusted Honda Africa Twin, which is still a twin-cylinder but is light years away from the performance of the Yamaha that won; were nothing more than for the greater weight, the lower power and the different, and less sophisticated, suspensions. In 50th place Lorenzo Larry with his Suzuki DR 350. He did it all by himself, without a mechanic-co to help him, coming sometime late to the bivoiacks, but always spin-to from the solidarity of the other pilots.