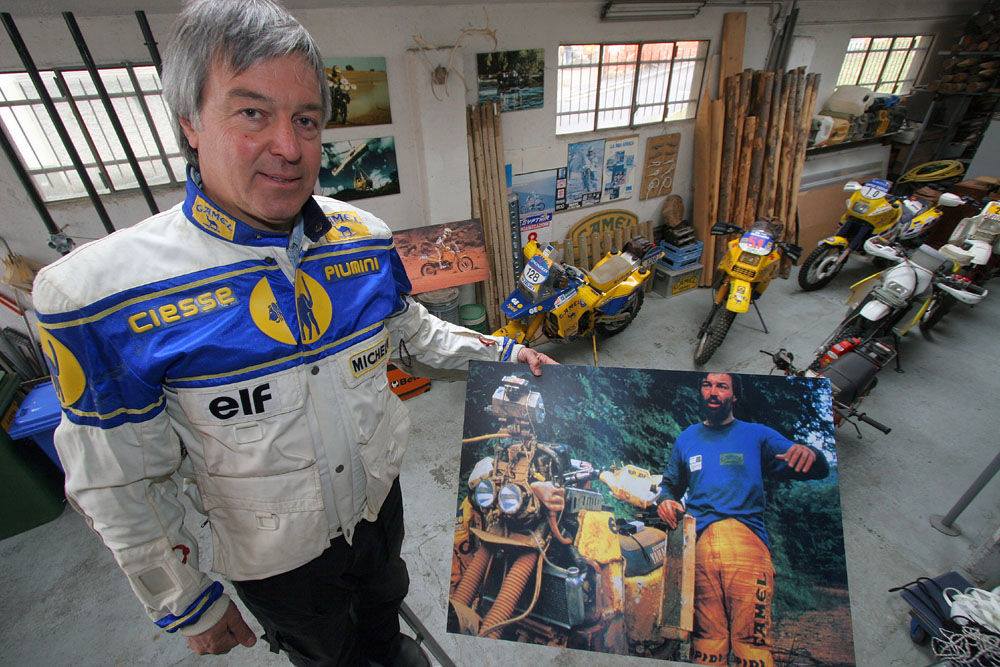 Beppe Gauri said "Gualo", dreamt of Africa and has conquered with the steady pace and tenacity needed to run in the marathon category. She found her amazing solo competition and in any size color gradient of the dark continent.

"My Dakar was adventure, risk and above all unknowns on the path, I think I can compare to the adventures of the pioneers crossing America on horseback without knowing of tomorrow. We had mechanical means, but the substance did not change, took a trip along with a gang of lunatics driving means improbable and utterly unreliable. "

"It's a strange story, What binds me to Dakar, coincidence would have it has crossed the convoy of the first edition in Africa; I was in the middle of the desert of Tenere and I saw a gang of lunatics driving Citroen 2CV, Piaggio Vespa and Renault4 and I knew that was going to be my next venture, without knowing exactly what it was. Thus the year after, in 1983, I attended my first Paris-Dakar. "

"More than anything else personal challenge. The races were very different; I started off with a backpack to 25 kg with everything in it: Crown, pinion, chain and sleeping bag and the Holy card of Pope John. I wasn't hungry for victory, but I had a clear goal: starting to get to the bottom, without spare parts and, especially, without assistance. And so I found myself every blessed day to fix a problem with the material I had available using wire, Scotch and rummaging in the garbage of the field less ruined parts. Liken the Dakar with the challenge of eight thousand. The road is long, the hostile nature, the time tyrant, and, especially, There is the unknown factor of technical failure, because once the race was just one element of adventure. I remember some stages where I left the morning aware of having to travel 1.000 km of dunes and sand, knowing that I could meet a storm or have a thousand contingencies. "

An anecdote to tell us?

"When I decided to participate in the Dakar I asked for help from acquaintances and potential sponsors who not only had never heard about this race and remained speechless when I spoke of 20,000 km race, but mostly I have arsed thinking I'd lost your mind. "

How many have you done and what is the most Dakar all?

"I've been to 10 Dakar and almost certainly hold the record of African rallies: 65 with an average of 5/6 per year. To do this I had to make choices and I left my job as a physical education teacher. However, the most exciting Dakar was the first, the trip in the snow until Paris threatening to drop every single kilometer and, After the polar Cold, the desert, the jungle. Remember that at the start we were in 360 motorcycles and 250 car, almost 600 crews. Each race day we lost a piece, a team, a pilot. At the finish line in motion we arrived in 50, that's where you know the meaning of the word “selection”. And’ as if I survived a war, bringing home the skin ... Was different from what today call Dakar, It is as if you had successfully climbed ten peaks from 8,000 metres. Nobody would have bet on my arrival and instead we are here to tell it.”

"A Honda XL 600 who lent me the Honda dealership in Milan Sibimotor, I fitted a roof rack, knobbly tires, I started and I won the marathon category. The marathon had strict rules, you could not replace anything worthwhile step in the prototype category, so the only solution was to repair what you broke as every detail of the bike was stamped. More than once I had to adjust the drain using cans of Coke cut in camp. "

Madness, Although the total cost I can't quantify it. The inscription was not an issue because the gas in the desert of Tenere I paid even 20,000 lire per liter. Then the return of the bike by boat and return air ticket. In addition various securities for the kit compasses, emergency flares and Balise – tool that enabled the rider's position in an emergency – which was even then a million. Still spending more gasoline: the Dakar I smoke about 5 million pounds of fuel only.”

You believe that bikes twins made it dangerous to Dakar?

"It is a mistake to think that the big twins have brought a greater danger to the rider, in fact the single cylinder with the passing of the seasons I can't any more, Yes “wardens” literally, already at that time the factory had six engines available. To make it more dangerous to Dakar were the arrival of GPS and navigation. Not surprisingly the charts you are shortened so monstrous: now it comes to postings of minutes, at the time between the first and second there could be even hours.”

The absolute best pilot you met?

"They say the results but not only: Edi Orioli. Besides being a great handcuff knew handle the gas and interpret the navigation. He used his head and thought doing a few errors. I remember because his first race, the Djerba 500 in which he participated with a Honda 500 4 times, I stuck up my ass and had professional approach not by enduro champion which was: He wanted to learn. The fastest was undoubtedly Ciro de Petri: had a stratospheric speed and his theory was “the important thing is to risk”: or fell or was lost or demolished him and the bike. "

What do you think of Dakar that takes place in South America?

"I'm no longer interested as then, considers that reflect paths that I have already lived with Camel Trophy and the rally by the Incas. And then condemn the misuse of a name which is related to Africa. I was not feeling well!”

"Today they're all great drivers but the difference is everything goes around, who runs to win has effective assistance. "

Yes, If he comes back the Dakar to Thierry Sabine once rules, where the pilot had a weight and a value. But today there is no longer browsing and whoever has more money and more engines. With the means that I have I have no chance to make the result, Moreover I was born and I finished my private career as he always wanted to Sabine. " 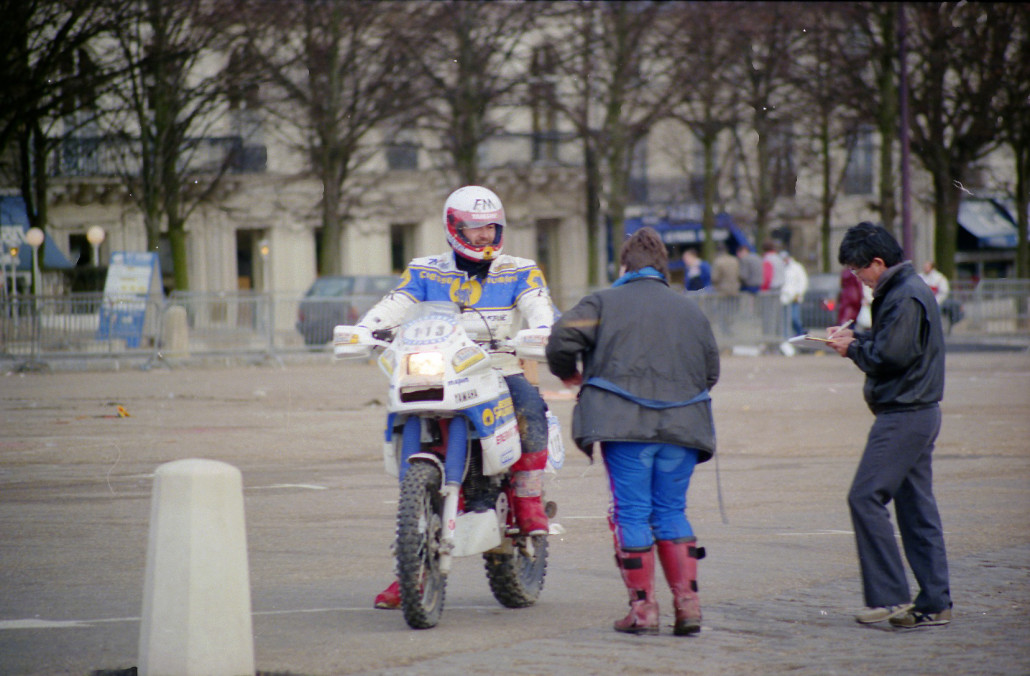 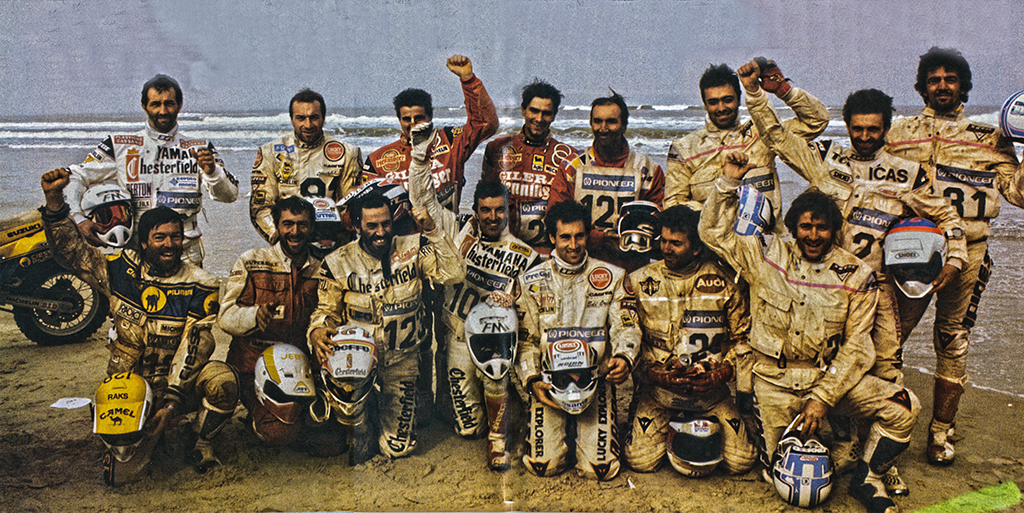 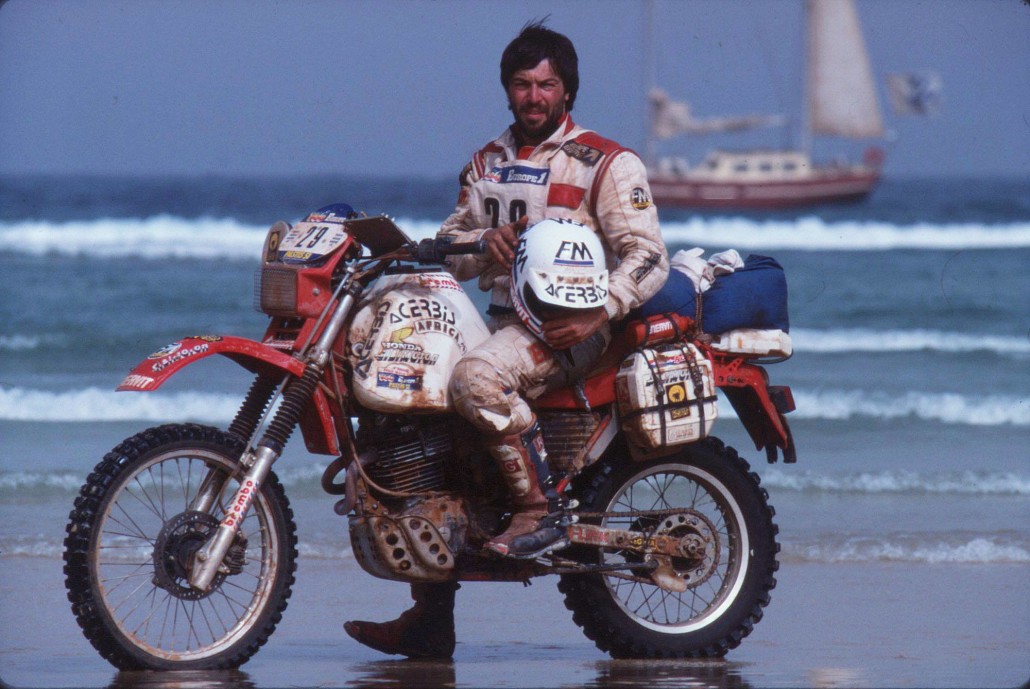 When individuals were pioneers. Canisters attached with elastic saddle and table number plate holder riveted on the rack. Beppe Gauri on Honda XL 600R at the start of the 1984.
He came regularly to the finish in Dakar finishing in 45° position. 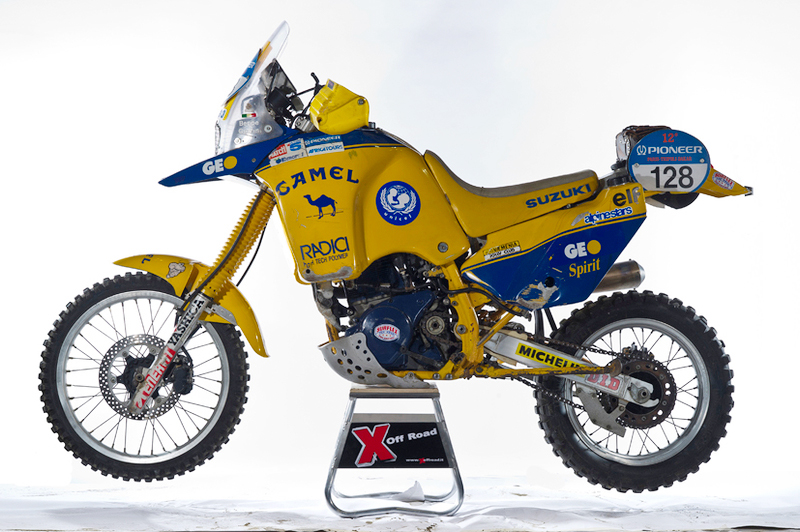 With over 30 African rally on the shoulders, among veterans of the Dakar, Beppe Gauri takes sides in 1990 riding a Suzuki DRZ 750 Big. End in great 15th position in General.