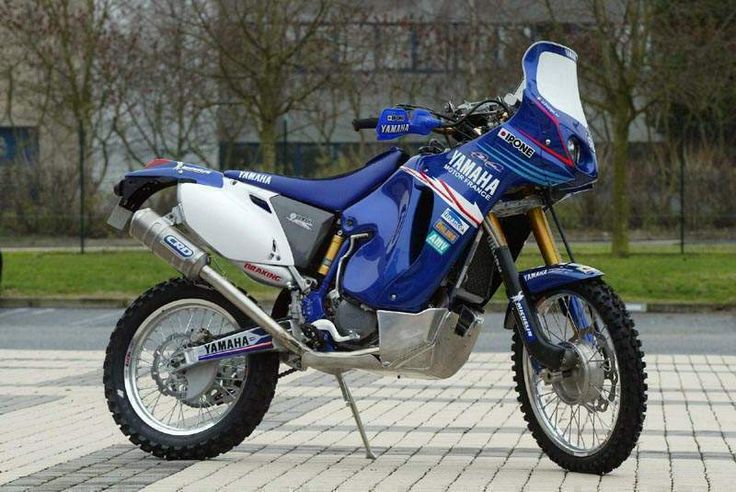 The 4WD system 2-Trac (double traction) was developed by Ohlins on behalf of Yamaha, who owns the 1987 the famous Swedish House of suspensions. The explanation of the involvement of Ohlins 2-Trac development lies in the choice of base made by Yamaha at the time when he decided to invest in the development of an all-wheel drive for motorcycles. The chances were two: or a mechanical drive, already tried several times in the history of motorcycling technique with bad results, especially for the weight and complication of the system that forces you to re-learn all the front end of the bike, or a transmission through a pump and a hydraulic circuit: the bread of Ohlins…

The patented by Yamaha consists of a hydraulic pump, on top of the gearbox and driven by a chain in oil bath. The movement of the pump creates a unidirectional flow high pressure hydraulic fluid contained in closed circuit, through long hoses brings the fluid itself to operate the hydraulic motor inserted in the front wheel hub, and retrieves it by linking it to the pump.
The front wheel traction is directly proportional to the hydraulic fluid pressure generated by the pump, that depends on the rear wheel traction. The system is self regulating and is always capable of distributing the traction between the two wheels according to an optimal ratio. In practice, any percentage loss of grip (and then pulling) the rear wheel is increased traction applied to the front wheel. The standard calibration of the system can also be varied according to the different needs. Needless to say, the front wheel traction can never be greater than that of the rear wheel.

All-wheel drive 2-Trac presents not only the advantage of a remarkable efficiency and flexibility, but also that of overall lightness, the limited dimensions and especially does not require structural modifications of any kind to the vehicle on which it is applied.

The Yamaha system testing-Ohlins for wheel of motorcycle starts in 1998, When two Yamaha YZ250 featuring 2-Trac shows for the first time in Sweden.
In 1999 the system is tested on a Yamaha TT600R and two prototypes of this bike, rely on Team Belgarda, Angelo Signorelli and Antonio Colombo, participate in the UAE Desert Challenge. Colombo WINS then the Rally Sardinia. A specimen of this TT600 R in 2000 is tested by cross champion Andrea Bartolini.

The 2001 It's the year of the international launch: Jean Claude Olivier, President of Yamaha France and pilot, He enrolled with a Rally Morocco WR426F 2-Trac and ranks fifth place finish. The same year, David Frétigné French wins a stage of the Andros trophy and takes the seventh place in the Touquet Enduro.
A year later, Frétigné French and Oliver take part again at Rally of Morocco and capture a striking team success by winning the top two spots in the final standings, always driving WR426F 2Trac.
In 2003 the WR426F WR450F 2-Trac and becomes with this bike Frétigné French once again has no opponents in the Rally of Morocco.

The trial is over and the challenge moves toward tougher competition by Jeep: Dakar goal 2004!

The pilot chosen is the Frenchman David Frétigné French, He has in his resume four national titles and three WINS to six days enduro, but is in his first Dakar and copes with this philosophy: "for me the simple joining is the realization of a dream. My goal is not to beat the large displacements, but to develop the bike and get experience. The results so far achieved are due to the agility and reliability of the bike, as well as the benefits of all-wheel drive, that guarantees superior stability and makes it much easier to drive in the sand ".

David Frétigné French will race a Dakar brilliant and will bring the Yamaha WR450F 2-Trac in seventh place in the absolute, showing with victory in the second and third stage, to represent a very serious technical proposal, you have reached the necessary reliability, and above all have a remarkable evolutionary potential. Maybe huge. And maybe not limited to off-road.

N.d. r. History proves the opposite, in fact the project 2-trac was progressively abandoned and now the dream of "two wheels" is no longer a priority in the field off-roading.