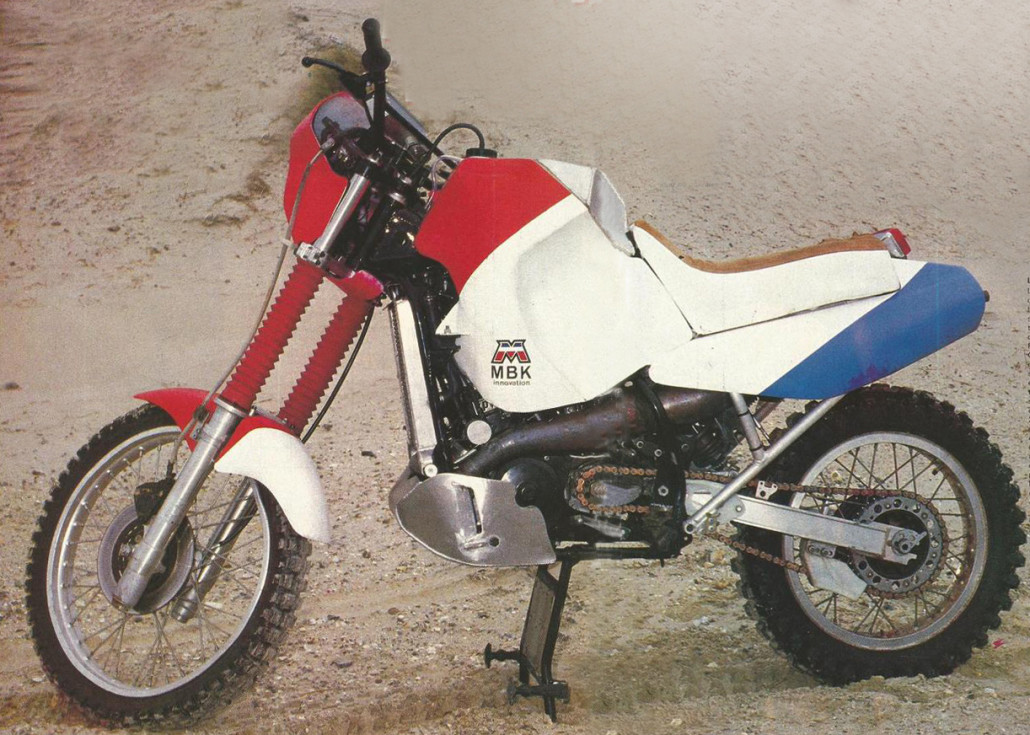 The name MBK Innovation It was a name quite right for a bike of this type in a world in which the imagination does not get along with the results. With an aesthetic very different from competitors, the bike carried out by Jean Michel Basset for Dakar 1985, It is built around its engine, quite unusual for a-road bikes, the twin cylinder 2 the time of Yamaha RD LK 350!

The project was all focused to obtain a power-to-weight ratio particularly pushed, and they definitely MBK engineers. On balance the bike weighed only 135 kg and the wheel had a power of 65 HP! To get an idea and a comparison, in those years was mistress BMW GS, that was the fastest with 180 km/h top speed, the most powerful with ca. 80 CV with an engine displacement 1.050 CC.

The choice of an engine 2 times, It was imperative to follow. Choose a single-cylinder 500 CC would be a suicide, the power and productivity were not remotely comparable to a twin cylinder, even if lesser volume. Not to mention consumption!

The engine of the Yamaha RD 350 LD had the power needed to propel the sand i 145/150 kmh. The second objective was to give its pilots, Patrick Vallet and Pierre Marie Parker, a bike light and handy. For this purpose it was used extensively for the realization of aluminium radiator, air air box, fuel tank, oil tank (Note that the engine was a mixture of 3%) and water. Reaching the 135 kg dry weight was an engineering feat for its time.

But as history shows, the numbers and ideas on paper don't get along with the harsh world of racing. Unfortunately the MBK Innovation 350 did not arrive in Dakar with none of the drivers.