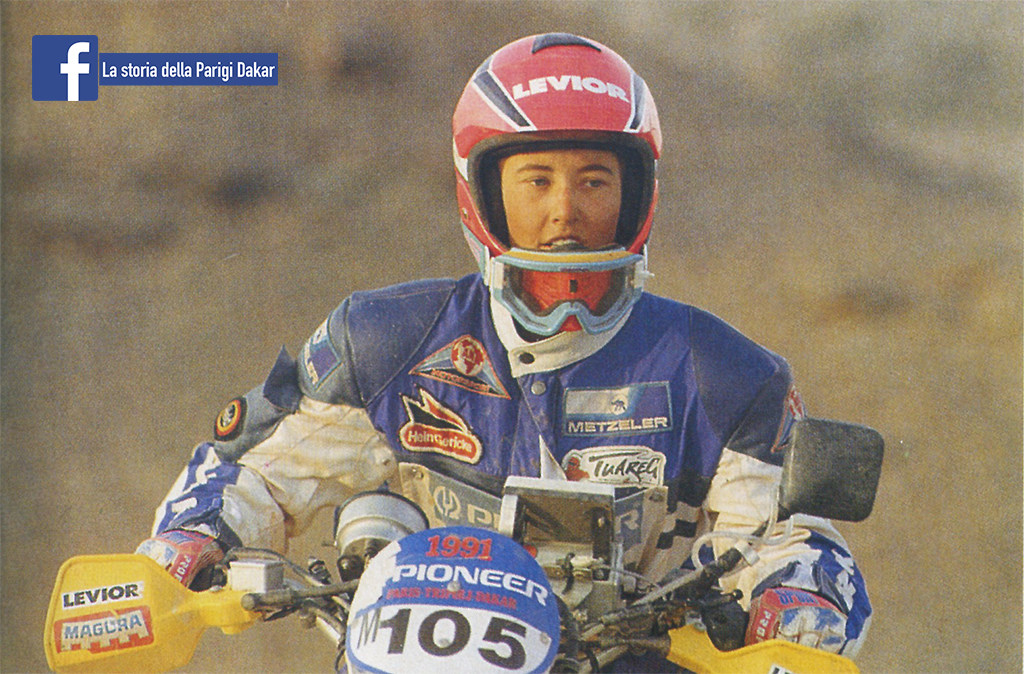 8 March: on this special day, "the history of Paris Dakar" intends to honor, in its own way, to all women who have taken away from this race, among the most harsh and exhausting.

The relationship between women and Dakar dates back to the first edition of Paris-Alger-Dakar, in 1979 at the start there were seven riders. Between these, Martine De Cortanze He obtained the best result: arrived 19° with a Honda 250 XLS, and preceded ben 55 pilots. Then the ranking was only for cars, bikes and trucks, and before she managed to get only 10 bikers.
Martine returned the following year with a Yamaha 500, without success due to engine failure, but recaptured the 19th place with a Yamaha XT 250 in 1981.

Worthy of mention, excellent pilots like Anne Kies that finished 8° Edition 1983, He saw also participate Christine Martin and Marie Ertaud, one of the first pioneers of a sport that never forgave.

History has already made Jutta Kleinschimdt, first and so far only woman to triumph at Dakar. We succeeded with a Mitsubishi Pajero in 2001, year of achievement in motion by Fabrizio Meoni. Yet his first Dakar had not been of the best: retirement in 1988 with a Bmw motorcycle. But the blonde German could do and the following year he reached Cape Town, goal of that issue, the 23rd place. Switched to cars in 1995, at the third attempt became the first woman to win a stage: with a buggy Schlesser prevailed in Agadez-Oclan of 1997. He climbed onto the podium for the first time in 1999 paired with Sweden's Tina Thorner (third) as long as the 2001, sailed from German Schulz, you put it all behind.

Race to Dakar means taking two weeks away from wives, girlfriends and companions. A principle that derogation from years Nani Roma, winner of 2014 with a Mini All4 Racing. But if you believe that your loved one is being dragged reluctantly into South America you are off course. The 44 year old wife not merely waiting for him at the bivouac but is regularly in race. As if that wasn't enough, addresses the Dakar with the vehicle that carries the greater energy expenditure, the bike. Rosa Romero Font compete for team Himoinsa which also includes Miguel Puertas and Antonio Gimeno, his Squires.
Riding a Ktm 450 He passed unscathed the first 10 specials: a no mean feat, whereas half of motorcyclists subscribers were forced to retire. The abandonment was forced the husband, After a memorable overcoat but without physical consequences. Now Dwarfs is rooting for Rose with which has been married to 21 years: galliot a motorcycle race in which both participated. Home I remained the three sons: the 17-year-old Abril, the-year-old Julia and 6-year-old Marc. A modern woman, no doubt about it, But anyone who thinks that the fairer sex has started racing in the Dakar just lately you wrong.

Better yet is doing to Dakar 2015 La spagnola Laia Sanz, eighth in the overall standings with a Honda HRC team. On the other hand we are talking about a phenomenon that even before we do 30 He has already won 13 Trial World Championship 3 Enduro. A passion that started in 4 When he borrowed Cota 25 his brother and began touring. At last 4 Dakar has always reached the milestone. Do better than the 16th place overall last year seemed difficult, but we hadn't given its toughening. Eighth in the fourth stage, is being waged in the eighth special: a partial survey has found only 44 seconds from the leader, then close fifth at 2 ' 36 '' behind the winner. If there is a woman who can one day win a stage in the Dakar that is Laia.

With this brief dedication we wanted to remember all those women who wished to challenge the desert and enter the legend. I'm obviously not the only, so please remember them with us by posting and sharing all those that we haven't mentioned ,in order to make the deserved tribute.