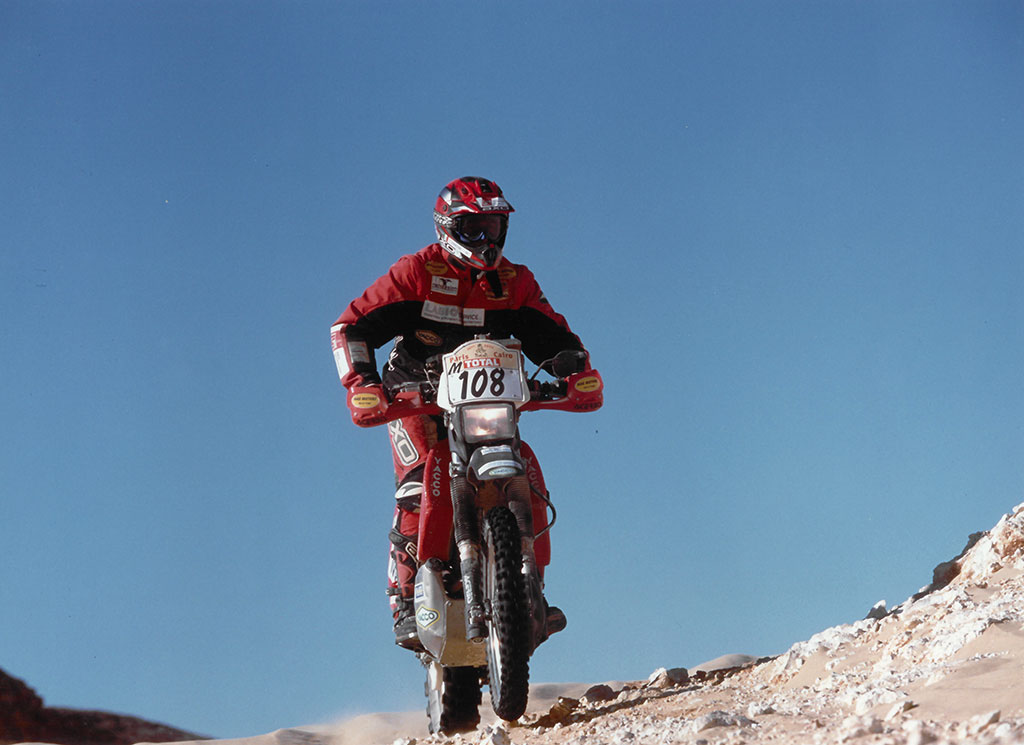 After the unfortunate, but partly predictable, my pick in ' 99, I researched for plan participation in Dakar for the new Millennium!French organizers set a path out of the ordinary, from Dakar to Cairo, then through Senegal, Mali, Burkina Faso, Niger, Libya and Egypt.

On paper a very interesting path: from 6 at 23 January, 10.863 km of which 7.616 of special stages, touching some mythical places that have made this race, as the desert of Tenere, Agadez, Dirkou, Niamey …
The arrival, expected at the foot of the Giza pyramids and the Sphinx, It would have been the icing on the cake!
After what happened the year before I have to, in spite of myself, buy a new bike. I remain faithful to Honda XR400 for the same reasons that I preferred the previous purchase, namely simplicity, mechanical reliability and excellent accessibility. Also in this edition, as in all subsequent, I will have to do without the mechanic in tow to save on the budget.

For the preparation of the bike I choose a more refined compared to the previous year, 3 aluminium tanks made by the specialist Robert Vallejo of VRP, supplemented by a sump guard of the same material which incorporates a tool box and the small emergency water tank.
I will accompany in this adventure mates Moto Club George Pope, with a bike prepared as my, and Alexander B with a Suzuki DR350. You also add Maximum Bubix Chinaglia, He also with DR350 and Julius Vallabhaneni on Yamaha WR400.
I have good memories of this edition, because we have formed a tight-knit group where, at the bivouac you went together, helping each other.
The 27 and 28 December in Paris scrutineering and the symbolic departure from the podium set up on the Champ de Mars with a parade through the city. You can then load the bikes on vans and headed for the port of Le Havre, where all means of the caravan are taken care of by the organizers and boarded a ship that will take them in Dakar.

The 3 and 4 January administrative checks in the capital of Senegal, the 6 withdrawal of motion at the port, General briefing and we're ready to go!

At the dawn of the 6, from Place de la Republic, We leave one by one in reverse order, namely from highest to lowest number. I have the 108, When it's my turn to the Sun rose and the audience isn't sure what the big events!
I'm here for a race in the desert, not for a mundane parade … so it's fine!
The first 200 km are on paved roads where you have to pay close attention to local traffic; as you can imagine on the street has it all and chaos reigns supreme.

The first stage is to 284 km, mainly sandy tracks, with much vegetation and numerous crossings of villages.

In the evening it is clear to me that the pitfall for the first week will be the dust, and that dust! In fact, until the entry into Niger, the route runs in sub Saharan Africa, made of laterite tracks (the red clay tennis courts) surrounded by vegetation and trees that, with their fronds, prevent the dust raised by racing vehicles to thin out. I, used to the foggy Po Valley, While very carefully, I'm leaving shipped without getting into trouble.

My imperative for this edition you get to the end, regardless of my position and that of friends/opponents.
I also realized that I have to listen to my body and if necessary stop for a break, When I hear come less energy.
With this race strategy arrival in Niamey, then after 6 days, without even having made a small slip. The bike is just like how you match, not a scratch!
At night it is exposed on the Board a statement of the organizers, saying that the French secret services have reason to believe that a large group of terrorists/Marauders, well-armed and equipped, is waiting for the passage of the race in the desert expanses of Niger, striking action.

For this reason the rally is momentarily suspended, pending developments.
Something like this had never happened, We are stunned disbelief. We perform routine pilot anyway without assistance, which consists, upon arrival at the bivouac, in seeking the two cargo planes of the Elf.
These are responsible for transporting from one stage to another a steel case and two complete wheels, all that is allowed to have included in the enrollment.
Once you have your crate (and it's not always easy to find among the more than one hundred present), mounting the tent, you take off your clothes and put them to dry race.

As you can imagine the space inside the case is limited, Whereas it must contain tent, sleeping bag, mat and a complete set of clothes to wear at the bivouac. To these must be added the tools for maintenance of the bike and spare parts that you can insert.
I had a wooden box that was originally part of a furniture Ikea, reinforced with aluminum plates. Inside I put the spare parts and, If necessary, the tape could do to lift the bike.

But back to the issue 2000.
The following day the stop we organize ourselves to do scheduled maintenance for the day of rest, then oil change, washing and preparation of air filters that will be used for the second part of the race, replacement tires.
This service actually is done for free by Euromaster, you just need to have their full wheel and new tyre.
In the evening we are told it will be arranged an airlift that will transfer all the means of the caravan from Niamey to Sabha, in Libya, from where the race will resume.

Now try to imagine what it's like to carry more than 1000 km a hundred motorcycles, as many cars, but most of all more than a hundred trucks and even 7 or 8 helicopters!

Will take care of everything two giant Antonov 124-100 and I assure you that was a sight to see them take off at full load.
The airlift will take several days and eventually stop will 5 days. Many, and sufficient to retrieve all energies and to call into efficiency vehicles; so the reboot would have restarted all over again.
After two or three days of forced camp on the edge of the airport runway, We note that there are fewer and fewer competitors camped like us. But where is everybody? In hotel, the chiselers!

In short we join them and we're moving to a large city centre hotel.
The saying “who later gets bad houses”, in this case is not true; We can accommodate us all five in a large suite on the top floor. Not bad for the Dakar! 🙂
The following day, Since the load of means and materials on airplanes is handled by the organizers, We would like an excursion in pirogue on the Niger River. A show! We can see the hippos in their natural environment and to visit a village of huts.
But the free ride is almost over; the next morning we embark everyone on a 737 destination Libya, where we face far less pleasant temperatures
But before boarding the plane, an episode of those that happen only in Africa: for some strange reason the aircraft is parked off the track, an area of land; the crew lets us know that there cannot enter the engines, Why ask us to literally push the plane to bring it back on track! Robe crazy …

The stops in Libya and Egypt were relatively simple, in the sense that they were sliding is long but, then you could travel at moderate speeds.
On the other hand the places and landscapes that we met were gorgeous: stretches of hundreds of km in piste, ascent of the volcano Wan Namous bases with control stamp right on top, Majestic dunes!
The only problem, the cold. In fact approaching closer and closer to Cairo, and then pointing to the Northeast, the temperature was gradually descending, especially in the morning.

We peons, not being able to count on support vehicles, We couldn't afford to have the following technical leaders.
Then in the evening, before you lock us in the tents, wandering the camp looking for materials such as cardboard, plastic sheeting or anything like that, in order to build the makeshift handguard (like those you see on scooters in winter), We could save your hands from freezing!
The strategy was to make the transfer toward the special stage, always on asphalt and often long, with cars built; then remove the chain from the bike and abandon them at the control point at the beginning of special. Obviously they were not transportable, and then the next night you had to do it all again

Entered Egypt managing meals came under the control of a local company, While usually this task is performed by a French group that brings everything from Europe, with the exception of bread and water.

My digestive system manifested for all his disappointment for this takeover, making life difficult for a couple of days. Stopping also 5 or 6 times in special, prey to sudden bouts of dysentery, It's not something just nice …
Little anecdote: that day Nani Roma, in the lead up to the day before, started several positions after me having broken the engine the day before.
I, crouched at the side of the bike in a huge Esplanade without any obstruction or asperity, intent to cope with one of the aforementioned attacks, I feel to get in the distance a motorcycle completely gas wide open.
Of course it was Nani. He sees me, stops and does: “TODO bien?”
I watch it: “not so much, anyway thanks for stopping by!”
A large!!! 🙂

Anyway, Apart from these problems altogether not serious, my race runs off without trouble; In short I am on the Esplanade of Giza stages of coming together with friends with whom I shared the latest 3 weeks. Amazingly we arrived all in the end, even with Bubix off the charts for endless trouble his motorcycle.
Definitely the edition of 2000 is not remembered as one of the hardest Dakar, especially when stopping 5 days, but getting on the podium and see themselves deliver the medal reserved for "finisher" is an emotion really hard to describe.
Of the approximately 210 bikers parties, 107 reach Cairo, I am 59° 15 ' penalty because of the loss of the roadmap in a stage. I also finished in third place in the Marathon category up to 400 CC., that is, the category reserved for those who, during the race, does not replace vital parts of the bike, What engine, suspensions, etc ...

Even in the second half of the race seem to keep zero record falls; the bike will return to Italy pretty much perfect, Mission accomplished!!!

The Group of five remains compact even during the two days that we need to organise the return home; In fact, for luck, We hadn't purchased the return airfare. So we make knowledge with traffic really amazing in the Egyptian capital, where the rule is: addressing intersections and roundabouts as if there were no tomorrow!
Basically you honk and you throw in, hoping for good fortune ...
Amazingly even those driving the most vulnerable, as for motorcycles and mopeds, adopts the same riding style and even more amazingly almost always it's okay!

The evening variant requires the use of headlights in place of the Horn--a chaos ...
The biggest risk since the departure of Dakar I'm running, along with my four companions, in a taxi to the airport: It is evening, to accompany travellers to the departures area cab drivers have to pay a toll, with the toll highway; our driver, rather than pay, you invent the maneuver of the century, turns off the lights and slips down into the lane intended for those who leave the departure area!!!

Text and photographs by Francis Tabai 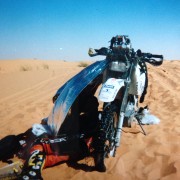 My Dakar 1999 by Francesco Tarricone