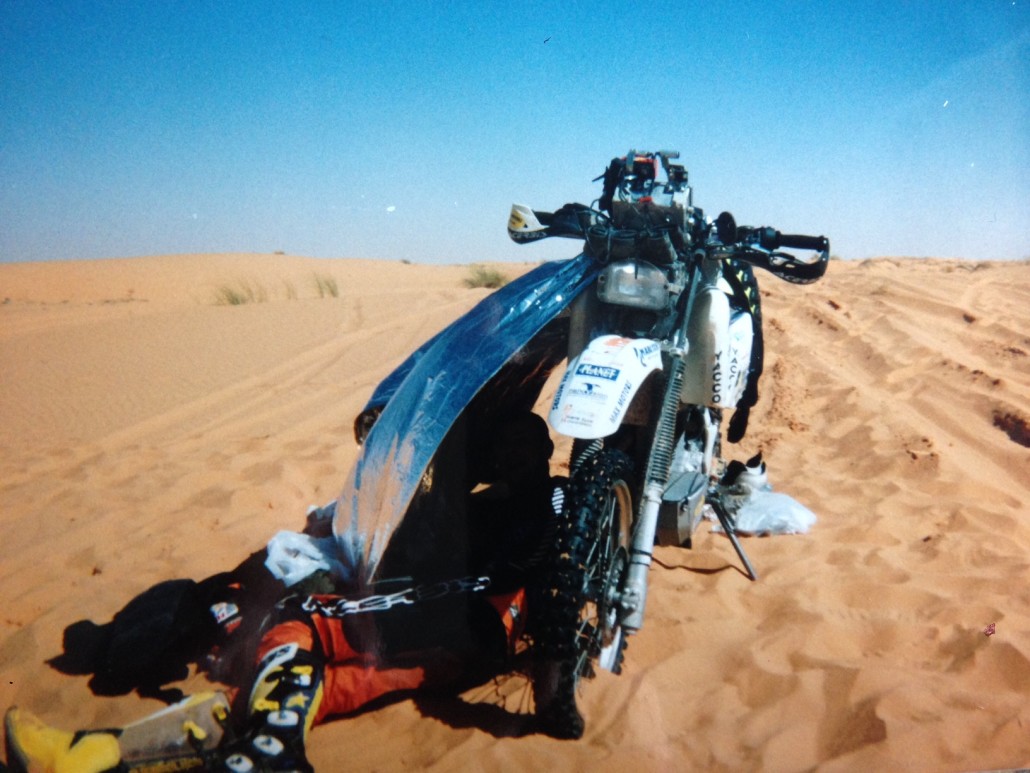 January 1999, from Granada to Dakar. I can't believe I'm take sides at the start of the race that I discovered and began to follow in the mid-' 80, those peak, Orioli and Dalia. I started with cross country about 10 years before, and attending the legendary Motorcycle Club Oggiono, I know a few friends who have already participated.
In a short time I decided to try it myself; in spring I take part in the Rally of Sardinia and, for just, I don't win the category bikes (B2).I'm busy looking for funders and, incredibly, I find the money to cover the budget for me and an airborne mechanic.

In those years it was possible to embark on planes of the Organization a mechanic; This was being transferred from one camp to another, and it was a relatively inexpensive way to have an assistance. The choice fell on the man, mechanic and pilot Max Tan.For the bike really went for a Honda XR 400, simple, robust and economical. Acerbis fuel tank, 2 plastic side tanks bought used, engine guard with water reservoir and tool holder, ad hoc calibrated suspension and the bike was nice it ready.

The first stages spun smooth away… all too, in fact I have no memories of those days. Nay, one thing I remember. In the morning, After breakfast, is delivered to each driver a bag containing the ration of food to get to night. Inside there are energy foods like candy bars, condensed milk, fruit juice, cheese and more. The ration is the same, regardless of whether you are on a motorcycle, car or truck. Evidently some of these foods are not very compatible to stress that a pilot bike bears during a layover; reason why it would be better not to infilarsele in jacket pockets. The fourth day I carelessly PEAR mousse in your back pocket, the arrival of stage I notice of disaster. The inside of the Pocket is completely covered in a sticky compound using pears and dust!Step over an hour in the bathroom of the Tan Tan airport to remove the molasses!
But the worst was yet to come …

Stage 6, from Bir Mogrein to Atar, Mauritania, 629 km of which 624 special test is the first stage of the desert, the real one! Mass start, It seems to me 50 pilots in each row, I'm in the second row. I keep a good rhythm for the first kilometers, then suddenly coming up fast on a stretch of sandy bumps, type whoops, I don't have time to get up on the platforms that I find myself in the air!

Touch the ground, bounce and do I have time to think: now I get hurt!
Luckily they are only a little’ bruised, but nothing broken.

The bike doesn't go so well, one of two trip master breaks and all the tools block folds. Allotment. After a while’ I stand behind other drivers who, such a note, take a wrong direction IMHO. I am convinced of being right and I go on my own way. Who do you think was right? … Of course the other! ☺ In a short time I find myself all alone, without a trace on the ground, in an area of flat sand with small bumps seams. I would have to go back, but you want to look for inexperience and doesn't waste any time, I bet the next waypoint straight to straight … too bad it's in 90 km!
The backcountry alone worn me mentally, When I refer to the race track I'm exhausted, and we're only halfway stage …I find myself with two fellow motorcycle club, George Pope and Alexander B, I decide to go after them; Unfortunately my body disagrees, between cover-ups and small falls I run out completely and I can't travel at their own pace. In hindsight it is easy to say that I would have had to stop for a few minutes, eat some candy bar and recharge your batteries. I didn't, and at sunset, I found myself faced with the last 20 km of dunes that preceded a nice track beat that in about sixty kilometers wore upon arrival.

The clutch, by now tired of my abuse, He decided that he had had enough and I planted in the lurch!At that point a experienced already acknowledges that that stage has gone bad, but that's a long race and anything can happen; you just bring the bike to the bivouac by the next morning, by any means. I, that experience I, I try to replace the clutch disks with poor quality tools that I have with me. I can't even remove the clutch cover!

I am so tired and not very shiny, that I can think of to stop the other competitors for help.

Ok, now they are among the last of motorcycle, but there are still plenty of cars and trucks that need to go from there. In a short time I find myself in the dark, with damp clothes from sweat and the temperature drops quickly; I don't even mind the night waiting for me!

Mentally I surrendered, I don't feel like doing anything, rest. Get an English guy, more tired than me, his bike works, He doesn't talk about it! He stopped at a hundred meters from me and decides to retire, not ready to continue in the dark alone. We wrap in our aluminum sheeting to try and retain body heat, relying on the arrival of the camion balai (literally fucks), whose task is to retrieve the “Veterans of the campaign of Africa”!In fact, after midnight, arrives. Unfortunately the “Veterans” by that stage there are many, There is no more room and tell us to wait until the following morning, When will pass a second means. We look forward to the Sun and its heat; It's cold!

Our expectations are granted … also too! During the day the temperature rises a lot, so much so that the same aluminum sheeting, used to fight the cold, are useful even to make shadow.
But it had to get the second truck fuck? In the morning, good now, We hear a helicopter, he lands near us, is the big dog Hubert Nasserl: tells us not to move out of there and wait the balai. Leaves and water and breaks down to locate other unfortunates like us; the stage the day before claimed many victims!

In the middle of the day arrives in a small plane, We turn on the heads, then launch an object bound to a small parachute: is a aluminum water bottle with a handwritten leaflet.

Says: the truck has a problem, don't move, vi recover later …But where we are, in a movie? ☺
Mid-afternoon end of little Odyssey, Here comes another helicopter that will charge us and leads us to Atar, Home of the end stop of the day before and the bike? Abandoned in the desert! We say they can't carry them with the helicopter and that the following day would pass a means to recover them. I'll never know if the elusive Middle passed or not; returning home, the organisers informed me that both bikes had been stolen. Worse than that couldn't finish!Only after numerous written requests, one fine day I called Monsieur Auriol in person, telling me that I would be granted a partial compensation for the loss of the vehicle.

My personal reflection, at the end of this first participation, is it would be better to join a minor rally, to acquire the minimum experience useful to avoid some coarse mistakes, inevitably, you are at the beginning. But the damage was already done, the experience gained, might as well start thinking about next: Dakar-Cairo 2000.

That year, among the bikes, He won the late Richard Sainct on BMW 650 Thumper, was the last year in motion by Edi Orioli. gps provided was still that little, so much so that it was possible to mount it on the side of the road- Book.
They were fitted with two riders side by side, on the triple clamp. Sentinel and Iritrack did not exist, the vehicle was positioned the “Balise”, a device that, Once activated, emitted a signal which allowed the satellite location. Once lit it was automatically out of the race, so it was better to think of it!The distress call had to be made only for health reasons or was achieved by means of the organization within the next day at the bus stop in the desert. 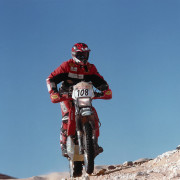 My Dakar 2000 by Francesco Tarricone