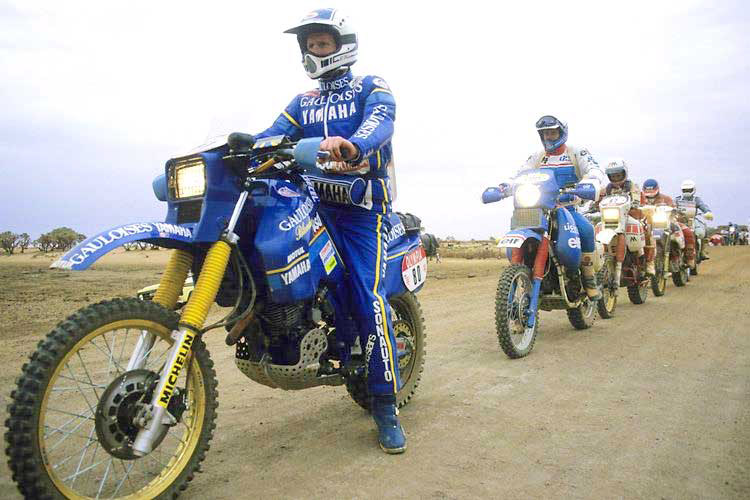 We missed him very little. After six editions of the Paris-Dakar in which the Italians, As a matter of fact, they had never shone, this year the African marathon was going to turn into a triumph for our colors. The triumph was not there, complicit in a good deal of bad luck, who put out the assistance of the Yamaha-Belgarda (assistance that Franco Picco would need extreme), and also accomplice a discussed decision of the organizers, who heavily penalised the Belgarda's colour bearer in the crucial phase of the race.

There was no triumph but there was a global Italian statement of all importance. Peak at the end was third, after leading the leaderboard for about half the race (not bad for one at the first experience in the Dakar). Behind Peak andrea's placed Marinoni. At the final goal, Zanichelli, Gagliotti - Wikipedia, Balestrieri and Gauri.

The Italian success was completed by Cagiva, that after winning several specials with Auriol and Picard took eighth and twelfth place. Success is gone, for the second time in a row, to BMW's Belgian Gaston Rahier, behind which jean claude olivier ended up, a French who in life is the importer of Yamaha in his country and who is famous for the elegance that distinguishes him when he is not riding the bike and that has shown that he is perfectly comfortable in a handful of professionals of two wheels.

But here's how the race went day after day. I start all French, unstoppable rise of Franco Picco and Gaston comeback 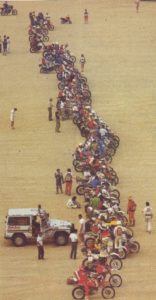 Rahier: this is the synthesis from the prologue French on arrival in Dakar, in detail here's the diary. 30 December Theatre at the prologue of the seventh Paris-Dakar the piloting school of Cergy-Pontoise, about thirty kilo-meters west of Paris. About fifty thousand spectators present, despite the polar cold, to admire the participants and their evolutions on an artificial path that immediately put a strain on the skills of the individual.

The best in the prologue was the French Lara with Honda, followed by fellow baron, also on Honda, and Bacou, about Yamaha. The best of The Italian Findanno, eighth, followed by De Petri and Gian Paolo Marinoni, thirteenth and fifteenth. January The actual competition begins with the transfer leg from Paris to Sète, in the south of France. The route winds on 1.076 kilometers from the rue national number 20.

Environmental conditions, characterized by a very rigid temperature, do not favor motorcyclists some of whom even risk freezing. One of the favorites, The Belgian Rahier, is hit by a spectator's car; the accident fortunately does not compromise the rahier race that can continue.

2 January 11 transfer by ship from Sète to Algiers, which was supposed to be the last chance for competitors to rest before facing Africa, for many it turns into a real nightmare.

Sea conditions cause a general malaise and many, during the night spent by ferry, they can't turn a blind eye.

3 January Africa's first stop, transfer from Algiers to Ourgla to 628 kilometers, departs only in the late afternoon due to the delay of the ferries due to adverse weather conditions (the latest competitors even land at the 18) . Among other things, the participants, crossing the Atlas Mountains, they have to deal with weather conditions that are not really 'African' because they encounter fog, cold and ice on the roads.

4 January With the Stage Ourgla-El Golea, and the first special test of 239 kilometers, the competition gets into the heart of the unfolding. French Lalay, winner of the Paris 'prologue', immediately finds himself in trouble. At the end of the day, however, in the first three places there are also three transalpine pilots: Baron, Bacou and Neveu, Bacou on Yamaha the other two on Honda. Good quarter Crossbowmen with Honda, while Marinoni and Auriol, both with Cagiva-Ligier, occupy the fifth and sixth squares respectively.

5 January Fourth stage from El Golea to In Salah and second special test. Franco Picco, with the Yamaha of the Belgarda team, takes third place that allows him to occupy the fourth position in the general classification. In the top three still the French Baron, Bacou and Neveu.

6 January The route of the fifth stage winds from In Salah to In Amguel through 600 kilometers of desert track. New Acute by Franco Picco: taking another third place, the Belgarda rider jumps to second place in the general classification. Bacou passes the leadership after the previous leader, Baron, stumbled across an accident.

7 January The sixth stage takes the competitors to Tamanrasset and does not involve major changes to the ranking. In addition to Picco, always second, the Italians Findanno are well placed, Crossbowmen and Andrea Marinoni, set-thyme respectively, eighth and none.

8 January The Paris-Dakar is painted with Italian colors, at least as far as the means are concerned. In the seventh stage, Tamanrasset to Ilferouane, the victory goes to Picard's Cagiva-Ligier. Bacou is still in charge of the general classification, while Lalay overtakes Peak and takes second place.

9 January Stage eight takes competitors to Agadez, on the edge of the Ténéré Desert. The stage victory is of the American Stearns with yamaha, preceding Auriol with the Cagiva-Ligier. General classification leader Bacou finishes fourth and Peak Seventh.

10 January The air of the Ténéré is good for Rahier; the Belgian, that up until now had been a little’ in shadow, wins the stage from Agadez to Dirkou and takes fourth place in the general classification. No change in top three positions still held by Bacou, Lalay and Peak.

11 January For the first time in the history of Paris-Dakar an Italian takes the lead in the general classification; it's Franco Picco leading the race ahead of Belgian Rahier, winner of today's stage. The success of the Italian patrol, in the stage that brings the caravan back from Dirkou td Agadez passing through Ilferouane, it's Ziobale: five drivers in the top ten. Bacou and La-lay found themselves in trouble. in the desert with the compass.

13 January After a day's rest in Agadez the race resumes with a megatappa of 1244 kilometers to travel in two days. The first special between Agadez and Tchin Tabaraden sees a new partial victory by Stearns ahead of Auriol. Peak and Rahier, coming fifth and fourth respectively, have retained the top two positions in the general classification.

14 January To Gao, in Mali, the supertappa started by Agadez ends. Rahier wins second special by reducing his detachment from Peak, still firmly in command of the general classification, while Findanno is third. 15 January Twelfth stage from Gao to Tombouctou and Peak still in command of the race. His primacy, however, is increasingly undermined by Rahier, that gnaws another 9'45” bringing-yes to only 13'39”.

16 January Peak re-establishes distances by taking a third stage place, while Rahier is only fifth. Victory, in the hamlet that takes competitors from Tombouctou to Nema, is the prerogative of the color carrier of the Cagiva Auriol, while a bad fall knocks findanno out of the race.

17 January Nothing done in the fourteenth stage. A very violent sandstorm forces the organizers to suspend the race and make the competitors reach the tichit finish line in a group. The suspension is propitious for Franco Picco who, a few minutes before, had blamed a mechanical failure that could have made him lose the primacy.

18 January The stage of the 18 january is divided into two semi-tassels to recover the special suppressed the previous day. The first special goes to Picard's Cagiva while Peak, Fifth, consolidates its position as a leader. It goes a little’ less well the second special where rahier approaches worryingly at peak; however the big trouble happens right on arrival in kiffa, where the Yamaha-Belgarda rider is penalized for stamping late and Rahier takes the lead.

19 January A new suspension is decided to allow still-missing competitors to reach the caravan. The 20 two specials will be played again to recover the suppressed one.

20 January In the first special, Stearns wins while Rahier and Picco win, who retain the top two places in the rankings, arrive delayed after having the wrong way both. The second special is baron's prerogative in front of Rahier, while Peak, only tenth, also surpassed in the rankings by French Olivier.

21 January The special is won by Baron and Rahier retains command over Olivier. Peak, now for many days without assistance, tries everything but in the end he has to settle for third place in the general classification ahead of Andrea Marinoni.

22 January There are still two specials on sand before arriving in Dakar, but by now the games are done. Rahier wins his second Paris-Dakar ahead of Olivier; Peak comes third while Marinoni, Fourth, completes the Italian success.