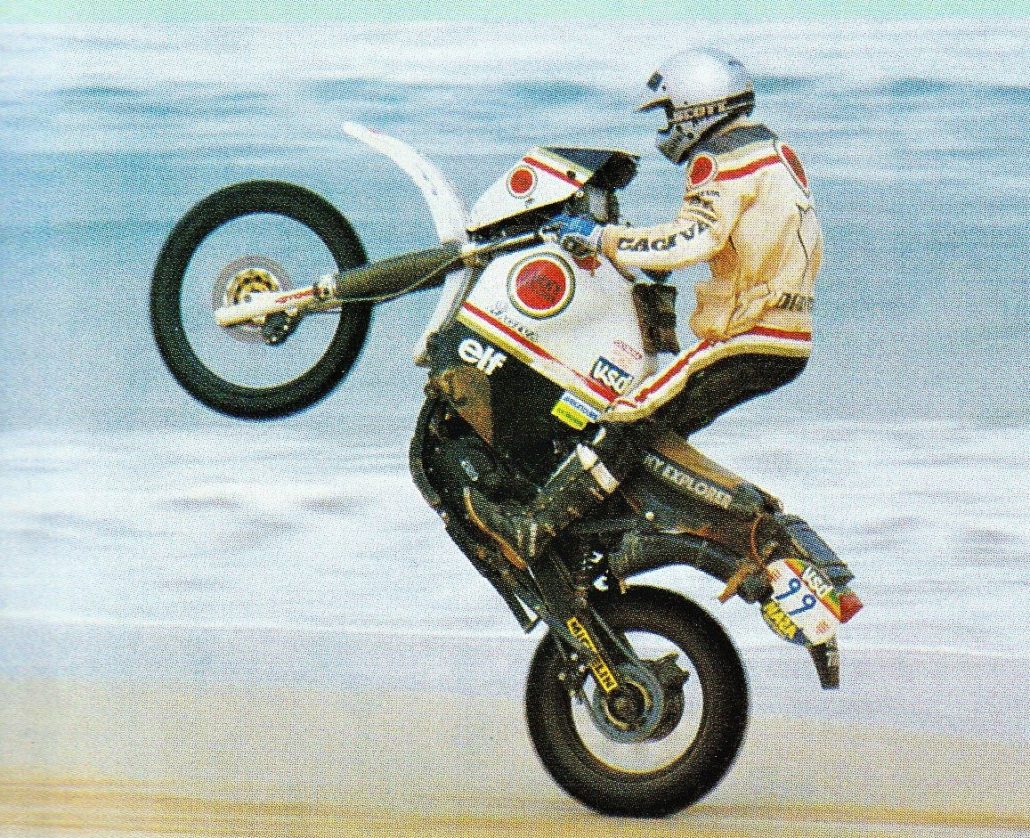 All travelers and all motorcycle enthusiasts know the adage that the last km are always the most dangerous. Because when we hear air at home or at the end the tension eased, our attention spans lower and at the same time increase the perception of fatigue. As soon as we lower the level of the guard, the accumulated fatigue becomes more pressing, pains and traumas emerge.

Apparently even for the participants of the Paris Dakar the last km are not free of danger and many have run into accidents just during the stage on Lake Rosa.

Of all the most unlucky was surely Giampaolo Marinoni. And’ the year 1986, already marred by 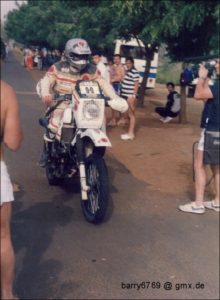 Sabine's disappearance, father master of the Franco-African event. Marinoni is completing a good race, thirteenth overall with Cagiva, a stage won. Just during the last stage the fall takes place that caused its disappearance. Two specials were planned and Marinoni was determined to complete the race with a victory. In the second of the two special part decided but already after 20 km falls ruinously. He manages to get on his bike, helped by his companions, and it reaches the finish line. What happened next is chronicle, it is a sequence of events in which superficiality and lack of professionalism are mixed that lead poor Giampaolo to lose his life to an internal hemorrhage.

Things have been better for others. The same Gio Hall, at the end of his first participation, 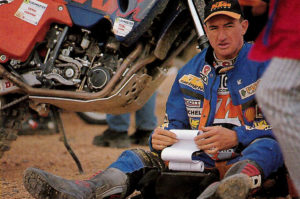 stumbles into the trap of the last km. He too was swallowed up by a good stage result that could be the icing on the cake of a beautiful first participation. Unfortunately, galvanized and dazzled by the possible placement, you don't see an embankment and it flies for a few tens of meters, losing consciousness. He will recover surrounded by the faces of some Tuareg staring at him. Mestamente will be back on the bike, with the tail between his legs, with his breath suspended for fear of breaking something that would prevent him from getting to the bottom. He's going to make it., will manage to cross the finish line and not to throw away the beautiful result of that first participation.

Even the volcanic Claudio Terruzzi falls a few miles from the arrival, at a stage that had been 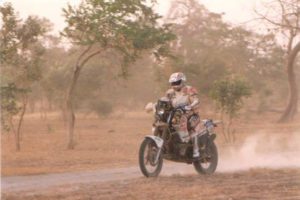 Neutralized, who didn't rank. A crazy flight that cost him a broken nose, a dislocated shoulder and the momentary loss of the use of the legs, consequence of the fall of the bike right on the back. In those moments El Teruss realizes the risk course and swears and perverts that he will no longer ride a motorcycle. Obviously, after a few minutes, when the legs are back up and running, rises on a motorbike and with a bloody nose, slain back and dislocated shoulder, comes to the bottom. But we know it, along with sailors and fishermen, motorcyclists are the most in-reach category to disprove.

Even one of the undisputed kings of the race fell into a trap in the last km. Let's talk about Stephane Peterhansel, one of the strongest drivers who ever put their wheels in the desert, at the end of the edition of the 1993 who sees him victorious, ends up on the ground ruinously destroying his Yamaha, so much so that he got to the finish line without the saddle and forced him, forcibly driving on his feet. up to the podium.

Watch the video of Peterhansel's fall on facebook at the second 0:50 clicking here.

These are some but who knows how many others have had to deal with the difficulty of the last km. When you add up km and days of running when the emotions, held firmly until then, melt and throughout the body aches and traumas resurface. At that moment, when the brain thinks it's done it, when it seems that all you've been able to pass on is enough that there's a new and fearsome risk. For some the price to pay was very high, the highest. For others, Fortunately, there was only the fear of having sent days and miles of running for a small, trivial imperfection a few miles from the end.