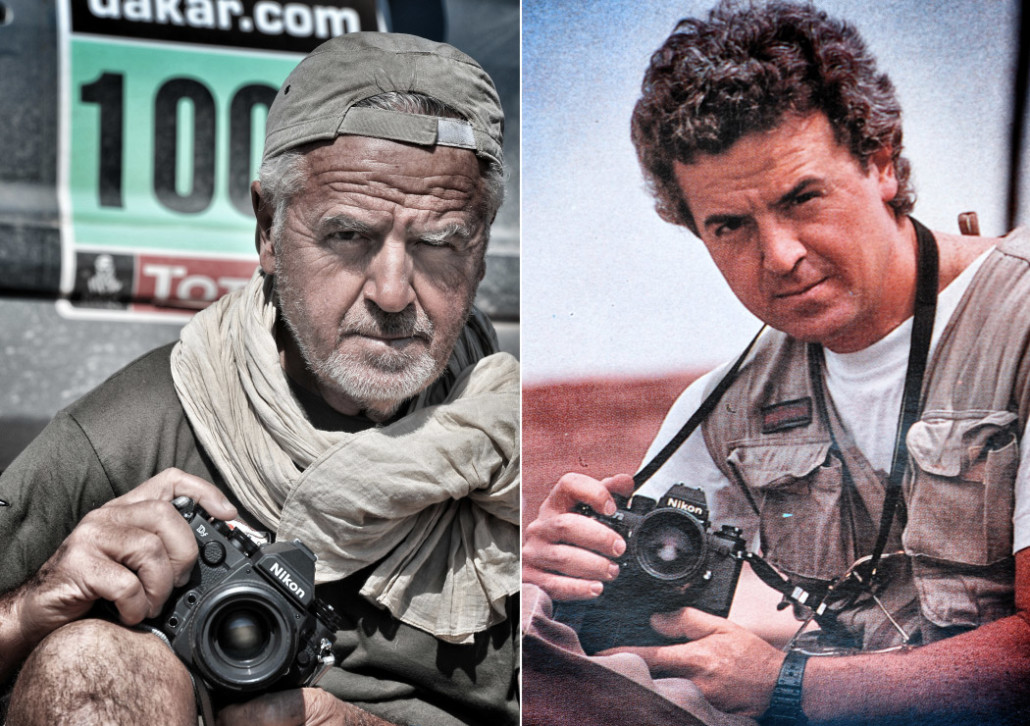 If we are here to celebrate a race become myth, fundamental part of these merits are undoubtedly of photographers who have immortalized on their films the heroic deeds of pilots and technicians.
One of them is Italian, and is among the best known in its environment. Its name is Gigi Soldano. We offer you an interview with Giovanni Zamagni and moto.it website in 2010.

If Valentino Rossi is the landmark World Championship riders (and not only), Gigi Soldano is among the photographers. A true champion: There is no picture that Gigi hasn't done, on the track as in the pits. But Saleh made history even of the Dakar, having "played" by photographer 21, the first in 1984.
As anyone who has spent time in Africa, even Saleem loves the Dakar, beyond the work and profession.
So, After writing my opinion, summed up in the title "I hate the Dakar", I exchanged a Word with Gigi, to make known its point of view and to try to understand more about this competition.

"Surely this is a particular race – explains the Lombard photographer – an escape from the everyday, a challenge that allowed me to make the most of what I like most (photos, Ed), in a unique territory as that African. Now is definitely a little different, But even today a trip to Africa is something special and charming. And the Dakar allows you to get in contact with people in a very special way ".

Soldano explains how it has changed the race itself in recent years.
"At first the spirit was almost exclusively collegiate, then became a real competition in all respects. Came the houses and the factory, you are a little lost the original sense ".

My theory on the Dakar, as I have already had occasion to write, is that the race no longer has any sense, Because browsing, in fact, no longer exists and is now travelling exclusively with full throttle from the first to the last kilometer. So, the dangers are increased dramatically, with increasingly tragic consequences. For all this, I hate the Dakar. Here is the review by Gigi.

"Don't think like you, Although it is clear that has completely changed the direction of this race, transformed into something like all other commercial and institutional. Everything that once was "legendary" and unimaginable, has become everyday reality with the media, cell phones, satellite transmissions. It is true that the arrival of the prototypes, big twins, before BMW, then Cagiva, then Honda and Yamaha, has completely changed the way of riding and now in the middle of the desert it always goes at full speed. The race, also for the need to explore new places, has become more dangerous. I believe that next year we will step back and, for all I know, at 50% you go back to Africa ".

Gigi is friends with many pilots, great champions such as Edi Orioli who have made the history of Dakar.
"They are all in love with this race and the best example is this year by Franco Picco, that to celebrate the 25 years of Africa's wanted to return to Dakar, in 54 years, with a Bike Marathon, then series, coming 23rd overall and winning his category ".

Saleh admits that something should be revised.
"From a human point of view, the Dakar is unmatched, but from a sporting point of view doubt there is: the rhythms are too high, We should have more peaceful times, give more space to private individuals and run with bike practically of series ".

Gigi tells us how a photographer lives a race so long and articulated.
"We must be able to follow her from inside, like any competitor: in fact, it's like you to participate in the race. I remember one year that Orioli (in 1997, Ed) had not participated in the Dakar and was with me in the car: When it was over, He confessed that he had never done so much hassle! And it is inevitable that it is so, because as a photographer you have to anticipate competitors, So basically you never sleep at night, you have to "guess" where pilots, because you have only one option and not continue steps as it does at the track ".