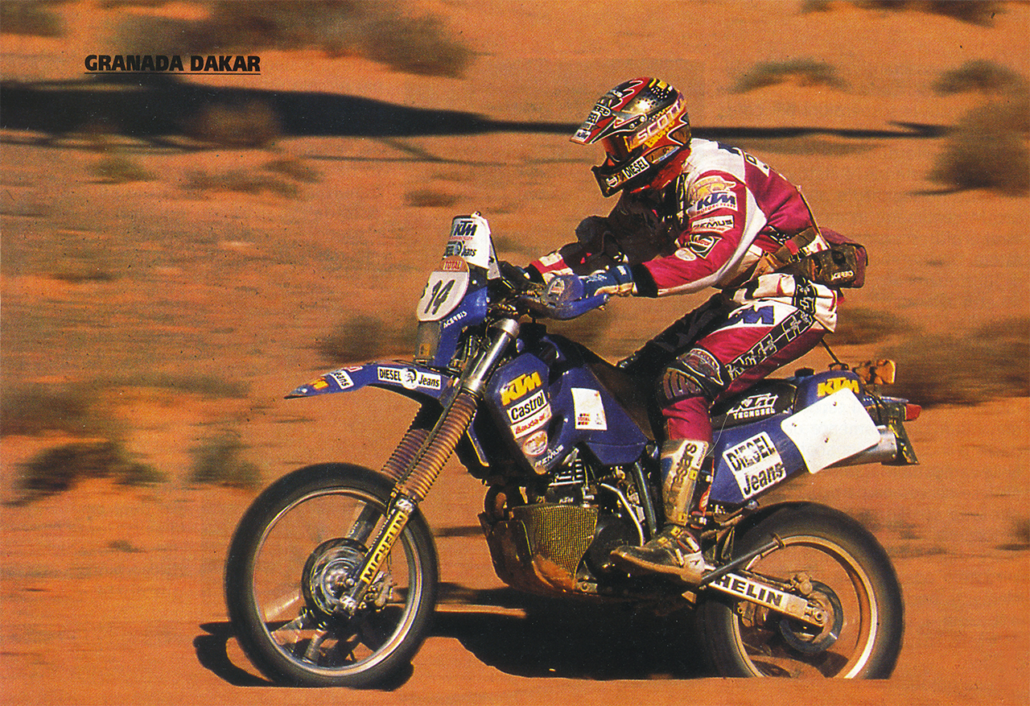 Heinz Kinigadner penalized by 5 for a flat rate

Single or twin? In Rally is an often recurring question, a question related to the choice of the engine that divides the world of enthusiasts. The first is lighter and less bulky, as a result the bike is more manageable, but the second solution guarantees an indisputable superiority in performance. KTM supports the advantage of the first choice; obligatory one would say, since it does not have twin-cylinder engines. And’ head-held out from the comparison, and the mono showed great things. He even held the lead until the seventh stage. Then fate on one side and the ground on the other, they broke what seemed like a dream come true. In Rally, In fact, the path is decisive, it is he who sanctions the winning choice, that favors one bike over the other.

In the case of Granada-Dakar, there were few slow and guided routes that could have preceded the KTM. On the contrary, the fast stages prevailed, those that allow twins to squeeze their greatest power reserve. Yet, the choice “of courage” of the Austrian House, entrusted to the former world champion cross-country skier Heinz Kinigadner, has shown that the gap is not so unbridgeable. The maximum speed achievable off-road has a limit “natural” and more than that you can not dare. The current single-cylinders are very close to the maximum speed peaks reached by the twins: the real difference is in the recovery. 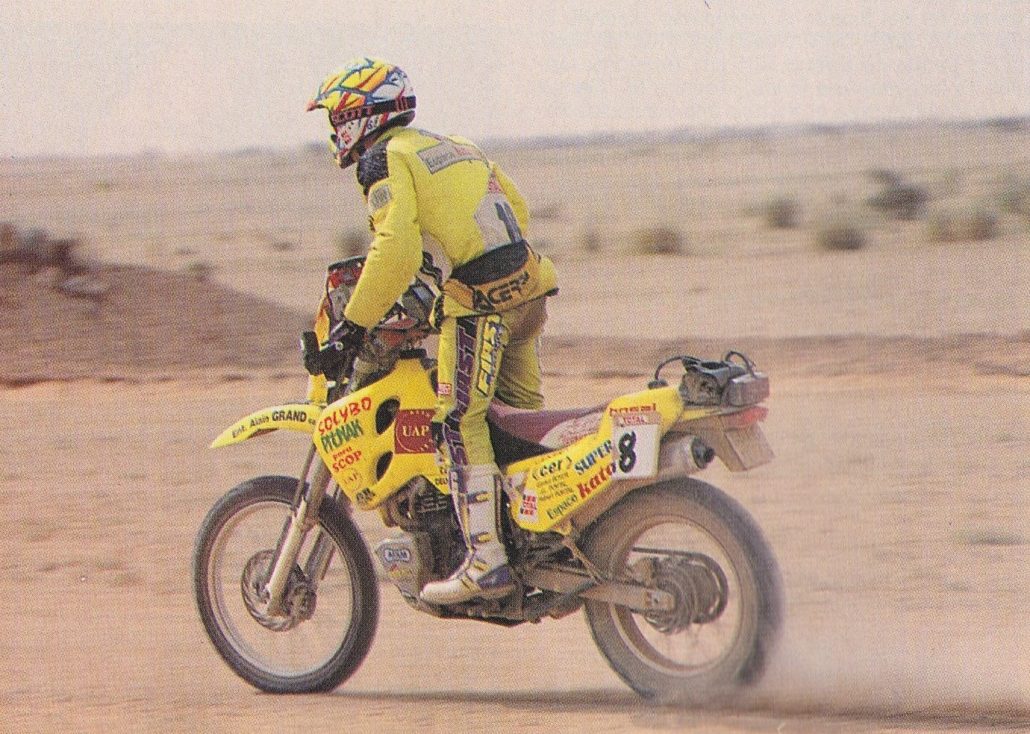 When, For example,, the obstacle of a dune, forces you to slow down, the powerful twin-cylinder is able to restart more quickly, arriving immediately at maximum speed. In addition, these bikes are able to free themselves more easily from the pitfall of soft sand. Nor should we underestimate the stability of heavy twin-cylinders: in fast sections, because of the greater wheelbase, allow you to “float” better on the tender sandy surface. In the light of these considerations, Kinigadner's company acquires even greater value. The Austrian rider's bike comes from the Rally, a version set up by KTM specifically for the great African marathons.

The starting point is the EXC 620 by Enduro, to which the additional tanks are added and several changes are made. It is a four-stroke single-cylinder with four valves controlled by a single overhead shaft. Liquid cooled, it has no balancing countershaft and has a five-speed gearbox. The chassis uses a single-beam steel frame, which is replaced by the original aluminum rear frame to mount a more rigid steel structure. This is how two communicating rear tanks are supported, able to contain 18 liters. 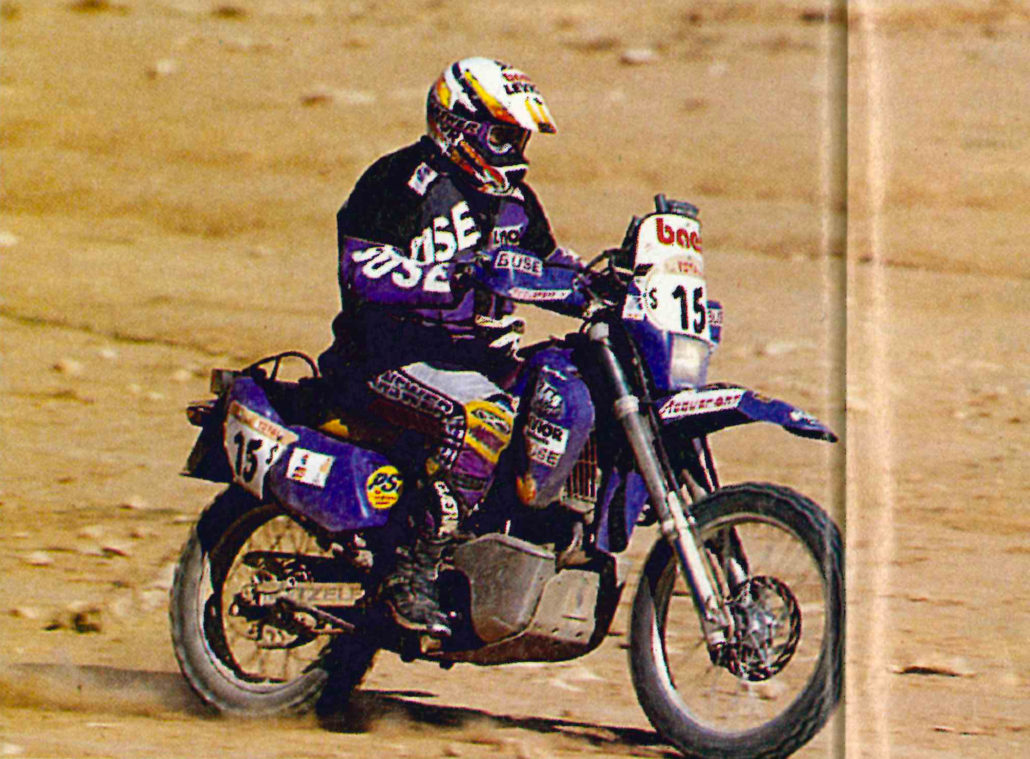 The fork chosen by Kinigadner is a Marzocchi Magnum to traditional stems from 45 mm replacing the original White Power with upside-down stems from 43 mm, while the shock absorber remains the standard one, always White Power. The rally set-up also includes a larger tank that can accommodate 20 liters of fuel. The front headlight holder incorporates a plexiglass fairing that protects all the additional instrumentation that is composed of the road-book (the picture where the notes to follow for navigation flow) and two trip masters, that indicate the distance traveled.

On the handlebar two plastic handguards, further strengthened by aluminium segments. Products from Acerbis, they have the advantage of being very protective without annoying the guide. The crankcase is safeguarded by a large aluminum plate that forms, in one piece, two side storage rooms where you can store water (mandatory by regulation) and tools. Compared to the bike from which it derives, the Rally has greater weight and dimensions, is penalized in driving, but compared to the rivals in the race it is certainly one of the most manageable bikes.

From the right: the road book and the trip master, sheltered behind the fairing. The petrol tank. A close-up of the single-cylinder four-stroke 620cc.

Still retains decent drivability, the approach is not very traumatic, something that does not happen on the Cagiva or Yamaha twins The KTM disengages well especially in the narrow: the frame has a geometry that allows speed in setting the curve and easy handling. In the extensions the stability is good, but when the speed becomes sustained the control of the bike requires concentration to prevent the front end from triggering dangerous “embarked”. The engine is generous, it is faster to go up in speed than a twin-cylinder, but the thrust remains less incisive and less robust.

Team KTM Austria
Heinz Kinigadner and Jurgen Mayer are the official KTM riders. The Austrian manufacturer has decided to field two drivers in official form. Kinigadner, 34 years, Austrian, two-time cross world champion, boasts four participations in the African Marathon. A curiosity: the pilot is also a member of the board of directors of the manufacturer of, bike. Mayer is the second; when Heinz was penalized by the lump sum (5 hours) he went wild by taking second place in the Chinguetti-Tidjikja stage. In the overall ranking is 7th, behind Sireyjol on “Private” of the KTM of the Challege Performance team.

THE KTM 620 the Dakar
It was the real revelation of the Granada Dakar. Kinigadner's single-cylinder has five times outclassed the most powerful and accredited twin-cylinders, unfortunately suffering from an engine failure, when he led the general classification. Mayer and Sireyjol still completed the race, demonstrating the excellent characteristics of the single-cylinder.