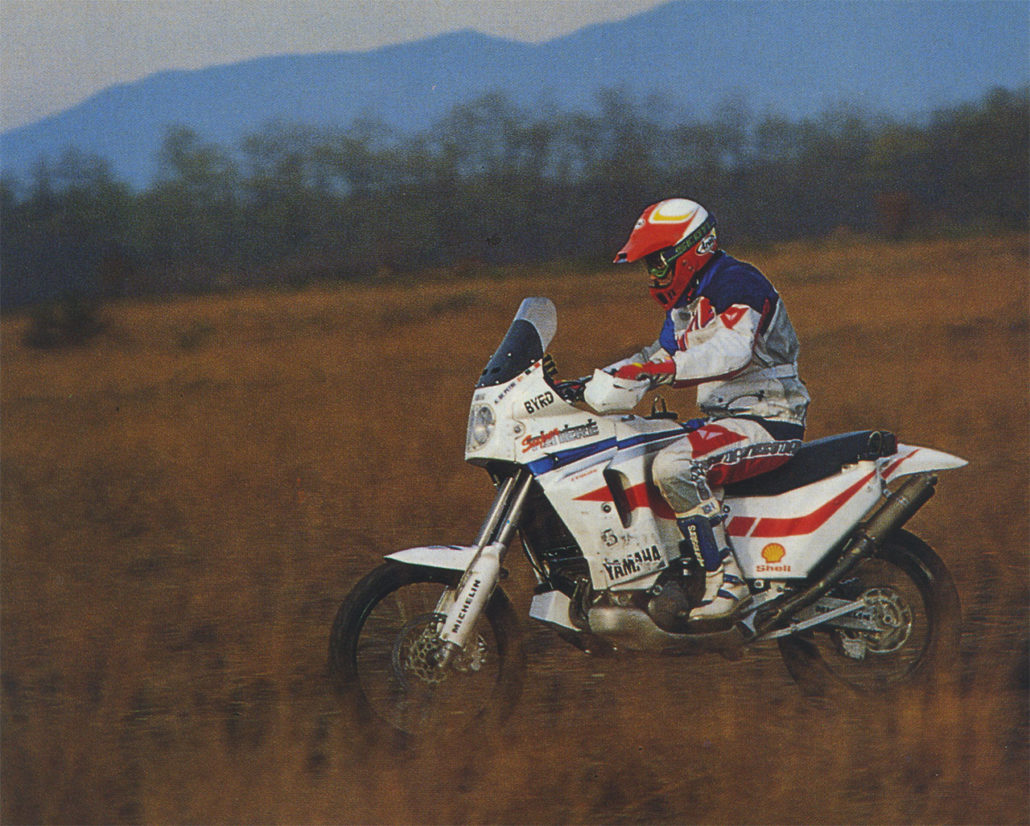 Alessandro De Petri had asked the Yamaha engineers the previous year; "I want a more powerful engine but easy to deliver and a lighter bike". And in Japan they fulfilled it. To the impetuous and fast driver from Bergamo, to the other French Peterhansel, has arrived, for Paris-Le Cap, a new bike with the TDM engine 850 and a low weight of nine kilos for a declared dry total of 180 kg. And the Yamaha YZE also won this edition of the African marathon confirming the maturity reached in the previous “Dakar”. 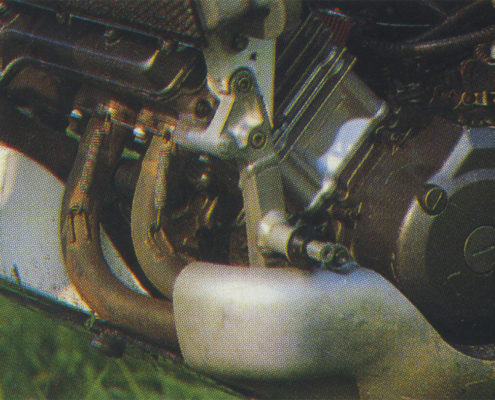 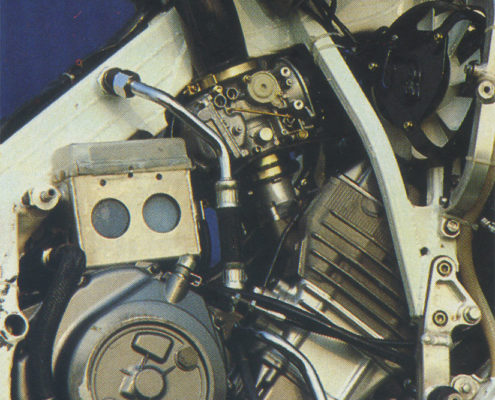 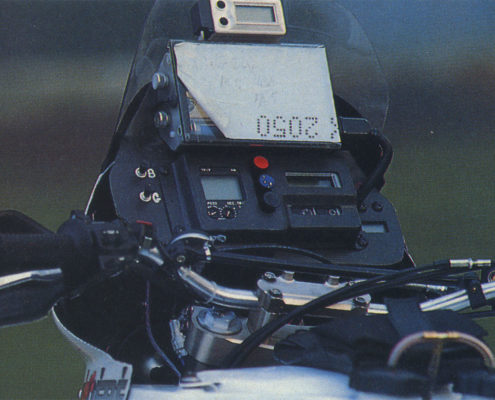 The previous year the Super Ténéré had won the race with Peterhansel unlocking a kind of curse that weighed on the Yamaha. After winning the first two editions of the African race with Cyril Neveu and the XT midica 500 Thumper, the Japanese company had had to mark the pace for ten long years, in favour of BMW, Honda and Cagiva. The new bike takes up the characteristics of the previous YZE so much so that externally looks pretty much the same as the model 1991.

An injection of power allowed the YZE to remain at the top of the ranking. Improved handling also by decreasing weight. In the test, an easy frame and a rigid fork emerge.

The most striking modifications are a longer saddle wanted by De Petri for greater comfort, (at the same time better protect the compass sensor) and a longer exhaust system with a larger silencer. There is also a different and more voluminous protection plate made of aluminum for the outside and Kevlar for the part near the crankcase and an air intake on the left of the fairing-tank to decrease the temperature around the shock absorber. 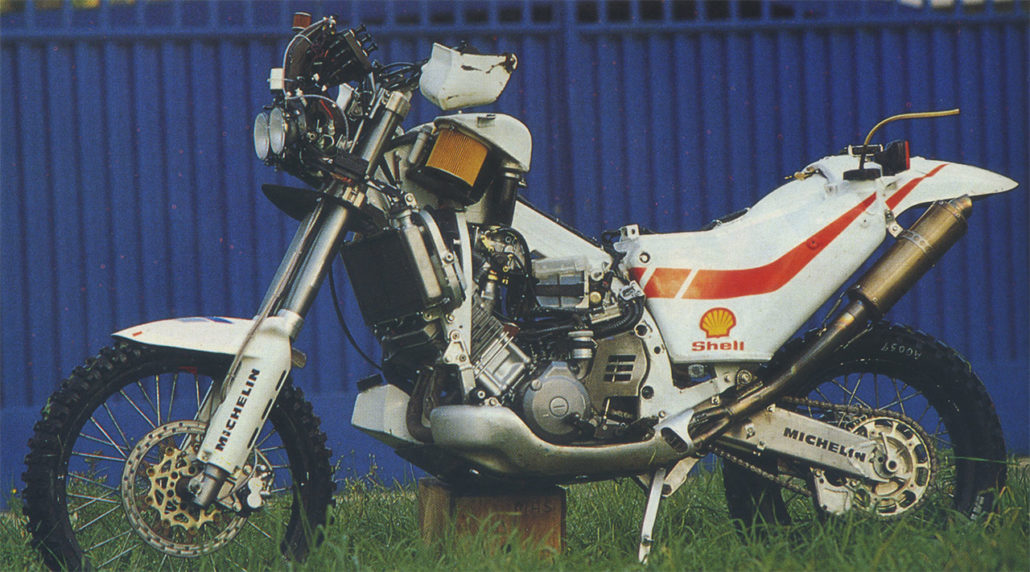 But the most consistent novelties are under the large fairing and the voluminous tanks. Let's start with the engine that is practically that of the Yamaha TDM 850. It is even the same as the standard engine in ninety percent of its parts: same crankcases, Pistons, witness, diameter of the ten valves, Crankshaft, dimensions of Mikuni carburetors from 38 mm, in addition to bore and stroke (89,5 x 67,5 mm with a displacement of 849 CC). Still present are the two balancing shafts in front and behind the crankshaft and practically indispensable to reduce the vibrations generated by this parallel twin-cylinder with the crank pins arranged to 3600.

Modified instead the suction box (also different from last year's model) which has two filters placed lower; the intake manifolds that have a practically straight course and carry the carburetors further ahead while the exhaust system is made entirely of very light titanium.

Compared to the '91 bike the most obvious modification concerns a longer and more comfortable saddle, a new Kevlar and light alloy protection for the lower part of the engine as well as an overall lightening.

Different from last year's TDM and YZE, the gear ratio further closer thanks to a slightly shorter fifth gear. The ignition is different from the standard TDM and is made to match even with the low-octane fuels recovered in Africa. The convenience of electric starting always remains, a well-tolerated weight boost, indeed required, by the pilots, to free from the effort of pedal starting. 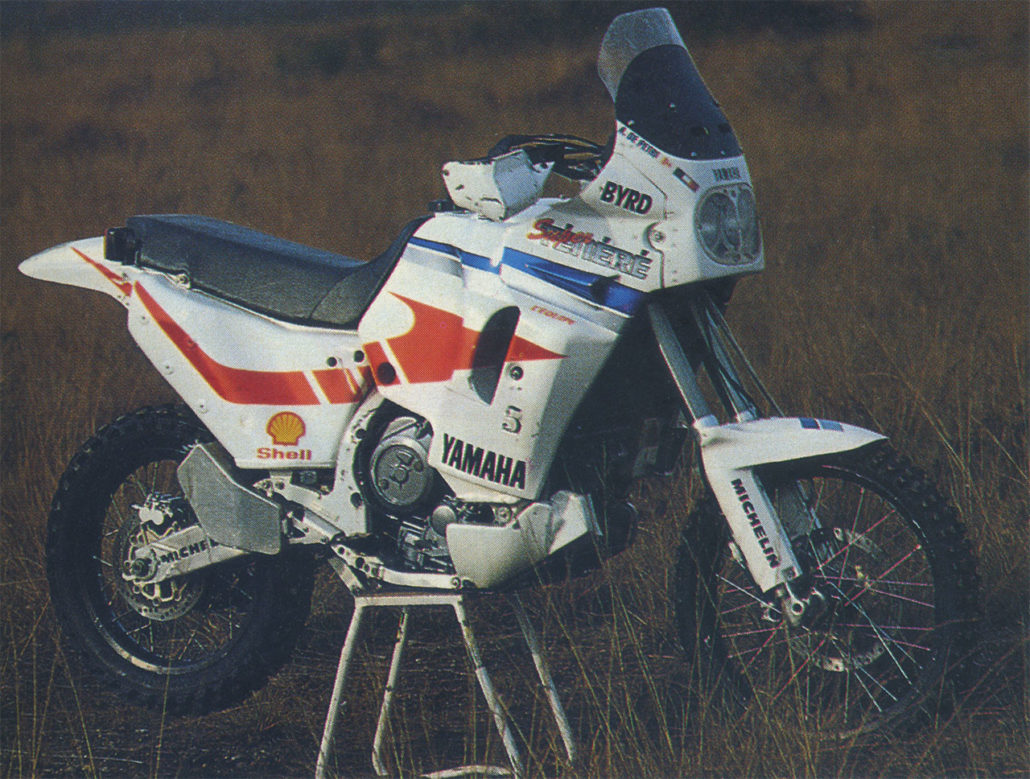 The dimensions of the frame and suspension are the same although great attention has been paid to trying to concentrate the weights as much as possible towards the center of gravity. In addition to moving the intake chamber and its filters to the sides of the upper beam, the battery migrates from the top of the frame to the rear of the cylinders. Its construction is particular since it is a modular structure divided into many pieces. To adapt to the new location, it forms a U-shaped parallelepiped.

The frame has the same single-beam design and still acts as an oil tank for dry sump lubrication of the engine. Practically the design focuses on the upper beam, made of bent and welded steel sheet, which directly joins the steering can notto to the attachment of the monoshock absorber. Four braces fasten and embrace the engine at the front while at the rear a structure, always in boxed sheet metal supports the engine and swingarm. Two half-cradles, in extruded tubes of light alloy, connect under the motor, the front of the frame to the rear.

A decidedly massive and reassuring frame in the appearance to which the three tanks made of aluminum are fixed; the rear is self-supporting and also supports the fender and the electronic compass sensor. The total capacity of the tanks is decreased by 61,5 in 55 liters thanks to lower engine consumption. For the longer stages, however, an additional four-liter tank has been designed to be mounted on the right of the rear tank. The ignition control unit and the current rectifier are now placed in the front area under the instrumentation, before they were housed under the saddle.

As we have said, even the suspensions remain the same. The fork has been revised in calibration, while the shock absorber, cause of many problems to the previous “Dakar”, has a new expansion tank of greater volume and fully finned to better dispose of heat. The Kayaba fork with upside-down stems from 43 mm in diameter retains an excursion of 300 mm and is widely adjustable both in compression and in extension. Behind it remains the beautiful light alloy swingarm built by bending an aluminum plate and integrating it with casting elements; all to form a differentiated structure according to the points of greatest stress. 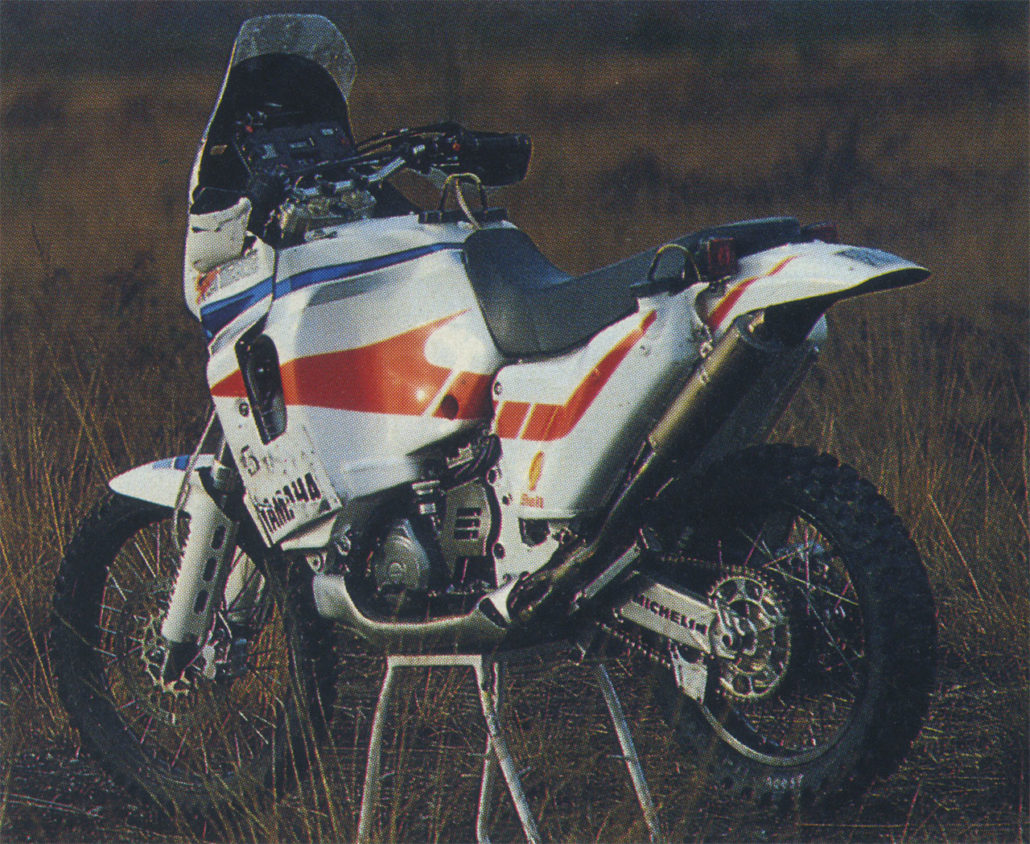 For safety the attachment points of the progression connecting rod that had broken on the bike of Cavandoli both at the Dakar and at the Pharaohs of last year have been strengthened properly. The rest of the chassis is still the same as the YZE of the 1991 with two floating disc brakes equipped with double piston calipers and aluminum hubs with double spokes that join the rim from one side to the other. A motorcycle “dakariana” or better to say African, in addition to being powerful and easy to handle, it must also be designed from an aerodynamic point of view in order to offer the lowest possible resistance to air and at the same time make driving more comfortable for the driver.

None of the “top drivers” however, it required greater protection and the shape of the hull remained the same as the old version. Fairing, fairing and fenders are made of carbon fiber mixed with kevlar, to be elastic and resistant at the same time. The abundant instrumentation is collected behind the fairing but the Italian TEAM of BYRD has a different dashboard from the one made in Japan and used by Peterhansel's bike. It is higher to facilitate the consultation of navigation tools and the road-book even in seated driving. The dashboard, newly in composite materials, is built in Italy.

As Cagiva Elefant, even the Yamaha YZE we tested was back from the Pharaohs rally. It is that of “Ciro” De Petri and bears the signs of the always rude treatment of the Bergamo pilot. It is a little ruined in the bodywork for the falls and for being trapped in the quicksand of the second day of the race; he also had the misfortune to see himself change the “heart” (read of course the engine) since “Ciro” has suffered a too close encounter with a stone that broke through the crankcase of the engine with sudden leakage of the indispensable lubricant. 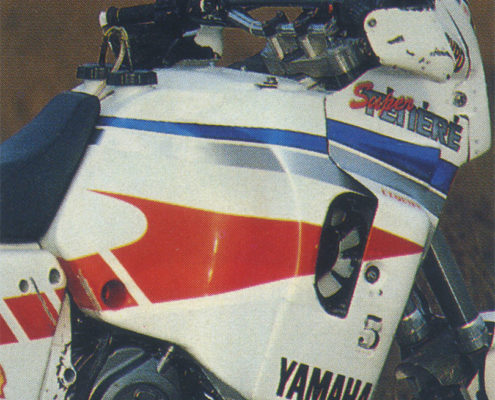 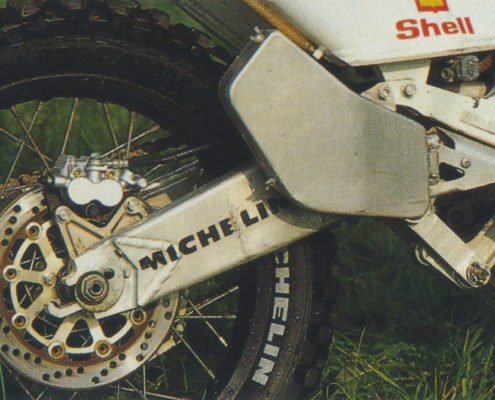 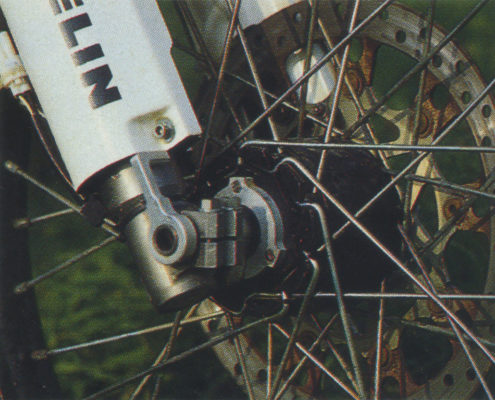 It still remains fascinating even if the “makeup” it's not a great evening. The air thus experienced is a kind of guarantee that this bike is precisely the one that competed in the Pharaohs. This same YZE we will find it only more beautiful, without dents and scratches, at the start of the Paris-Le Cap. The test ground is the same that we used for the Cagiva Elefant. Immediate comparison where similarities such as ease of driving emerge, stability on fast tracks, and powerful and still modular brakes. The Varese bike is superior in engine, in its power delivery, in full-bodied shooting from low revs.

As for the maximum value of the power they are probably very close and only the Yamaha appears more angry, more gritty from medium revs up to maximum engine usage. In terms of performance, Yamaha has therefore significantly brought the Cagiva closer, greatly reducing the power gap that was the biggest difference with the Elefant. The weight distribution also now appears more favorable and the bike has gained in handling. The bulk does not scare too much and the set-up in the saddle allows you to better control the bike. In addition, the new saddle is a real armchair so soft and abundant in size without however being a hindrance in the central area.

Obviously the YZE is not a light two-stroke enduro but it is quite easy to drive thanks to the well-calibrated suspension. Especially the rear one always manages to copy the roughness with rigor while the Kayaba fork is too rigid and transmits part of the stresses to the arms. Of the engine we have mentioned the right delivery and the sensitive power that should be around the 80 horses at a speed higher than 8000 RPM. They are almost ten more than the engine of the TDM from which it strictly derives but they seem many more for the liveliness of the character of this engine. The difference in favor of YZE derives mainly from the possibility of having a practical discharge “free” and the specific calibration of the carburetors, from the completely different filter cassette and a modified ignition.

In memory of Hubert Auriol
Scroll to top