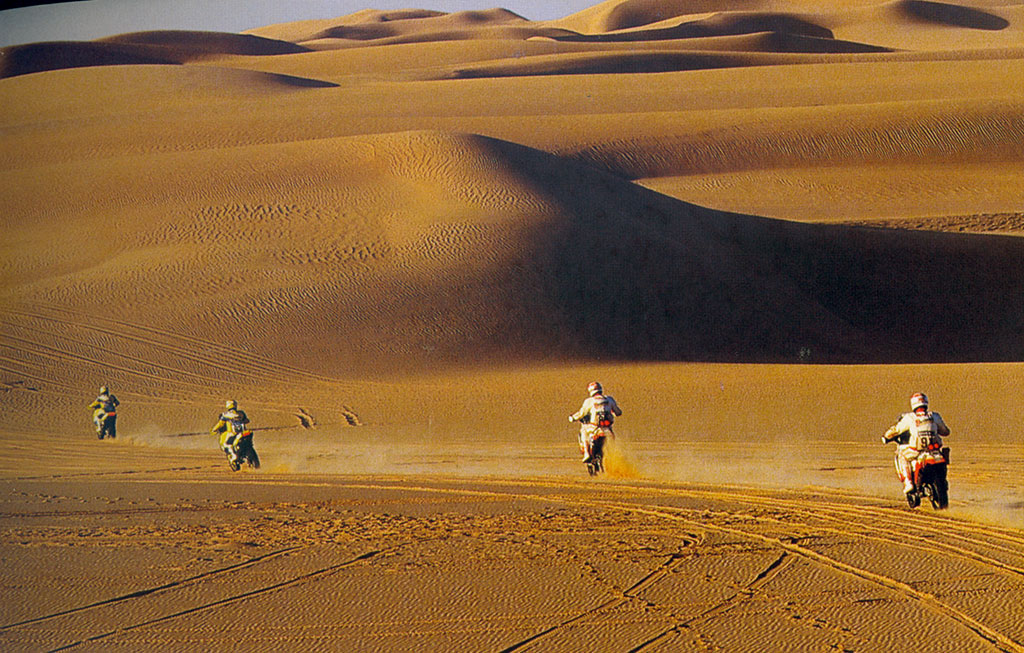 Two images to focus the spirit of the private drivers at the Dakar The German Brunner pushing his Suzuki up under the finish line of The Pink Lake his face reduced to a blood mask. the foreman of his destroyed bike in the last fall. And still Brenno Bignardi in Tambacounda after the last 50 kilometers traveled on a Gilera without shock absorber, without tire and without saddle: then sitting on the rest of what had been a frame and running on the rear rim. The important thing is to get there, the last page of the road-book says “the sweep: good!” but it only applies if you have a place in the rankings. Twenty-one Italian motorcyclists took the departure to Paris from private individuals: you're the official pilots, if we consider that even Roberto Boano, registered by Honda 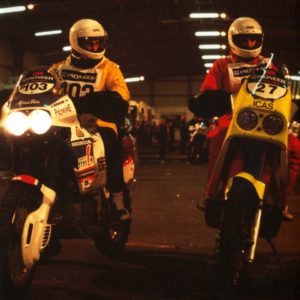 Europe on the most advanced Africa Twin 750 well. of those twenty-one only eight have concluded, ranked among the twentieth place of Max Malik and the thirty-sixth of Antonio Cabini.

But there is private and private. The drivers of the Assomoto team are, for example,, of the privileged. “Yes — confirmation Aldo Winkler — because we can count on the excellent organization set up by Bruno Birbes: a truck and a car on the slopes, airborne mechanics. however. the private who does everything himself and runs with spare parts in his backpack no longer exists”. Not a chance: This year, with just over a hundred bikers enrolled in the race, paris-dakar hit an all-time low.

What are the reasons for the crisis?? The costs. Of course: those private individuals who aimed to have the bare minimum (that is, a mechanic. maybe in consortium. transported on Transair's planes and a spare parts case entrusted to a competing truck) they had to deal with prohibitive figures. So much so that Sabine, to stem the bleeding. promised that next year TSO will set up a couple of trucks to transport the spare parts of private motorcyclists.

The '91 quotation for the transport of a simple cash register had reached twelve million lire Bruno Birbes, bresciano - Wikipedia. forty-year-old, three Dakars played on motorcycles, however, it is of the opinion that the promises of the organizer will have little effect Because the natural evolution of the race – analyzes Birbes – rewards those teams. even small ones who have advanced towards professionalism. We have the pride of taking our pilots to Dakar, so I have the crunch of having lost too soon Marx.

But I also have the satisfaction of having seen right in matching this year my organization with the Gilera. No need to run to the limit. but focus on good mechanics and reliability of follow-up assistance. Winkler then Walter Surini and Brenno Bignardi were thus able to run a relatively serene race. And like them Giampaolo Quaglino, that at Assomoto he leaned in to keep his private Gilera in order. 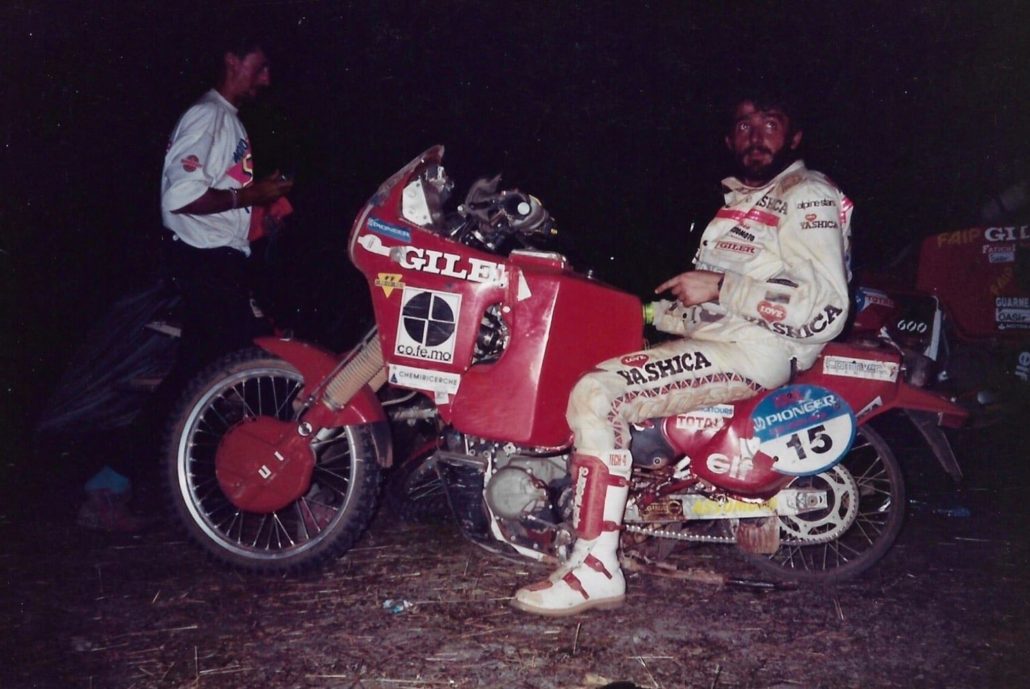 But it's all pilots who can have a big budget, staff or collected through sponsors such that they can set up an almost guaranteed program. Harder still, then, and it was the brazilian's beautiful feat De Azevedo. who brought his Yamaha XT 600 to victory in the Marathons (strictly standard motion) and in 21st place overall: asking for assistance a little’ from all sides and begging a rear tire (at Byrd) when he noticed in Kiffa, to ride a motorcycle with the slicks.

Massimo Montebelli explains and Fabio Marcaccini, with Yamaha 600 formed in the Wild team – year after year we have grown: from pure amateurs to individuals with a minimum organization. The Dakar is always the toughest race in the world, but this year it has become acceptable to us. The placements prove it. Mario Pegoraro, only survivor of a trio, finished in 33rd place with the Honda Dominator. Thirty-nine-year-old, was cared for on sight by TSO after the disqualification of his partner Domenico Magri for pirate assistance. He concluded with a change that he knew no other relations besides the first and second. 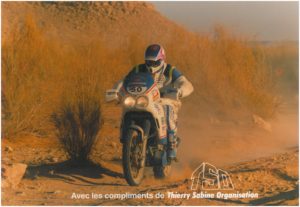 Among those who didn't make it, the most unfortunate are Paolo Paladini and Giampaolo Aluigi, stopped two days after the conclusion by as many falls into the dust. “I also had to abandon the bike — the first regretted it — because the dislocation of the shoulder forced me to get into the doctors' car. Now my Africa Twin will make the joy of some black people in Mauritania”.

Paladini's Adventure, including the bike, registration and assistance offered by Honda France, had cost just over thirty million lire. Much more had invested the veteran Beppe Gauri (also had a unimog service personnel), stopped by a fall before facing the Ténéré. In short, the Paris-Dakar costs dearly: it will be unthinkable next year to register for the race without providing for an expenditure of at least forty million lire.

Though, despite everything, this raid remains the African race coveted by every private: because his fame is great (and that's why it's a little less difficult to raise capital between sponsors), because seeing The Pink Lake is equivalent to a degree. Even a rookie has a fair chance of succeeding: however, it must rely on the organization of those teams that now boast considerable Dakar experience. “Adventurers of the 2000 Follow!” Said Thierry Sabine.

And to those who responded to the appeal of that First January 1979, laid down the rules. That they sounded 20th like this. I would take you to where you would never get there on your own, he said.; me and only I know those African countries, governments and people. So I'm the one who sets the rules, those studied at the table and also those that, necessarily, they're going to be improvised day by day. But there's a watchword to keep in mind: “demerdez-vous”; and that is — translated with an improvement effect — “hurry up on your own.'. 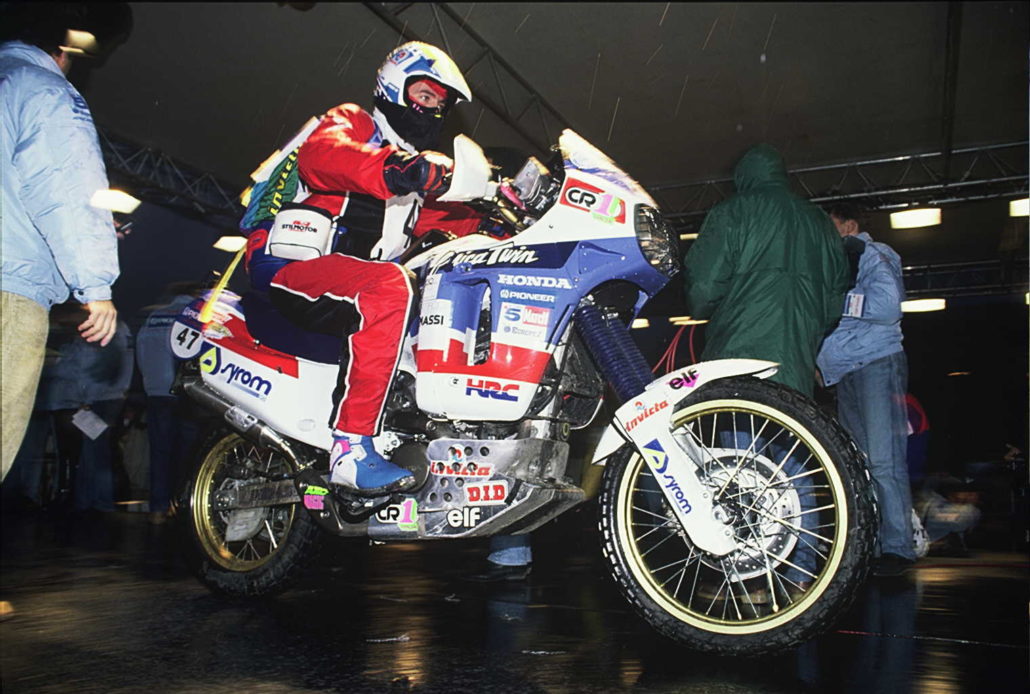 It was probably the only way to rule that hundred “adventurers”, largely careless; Thierry Sabine knew he had to take on the role of “Master” of the race, but he also knew he couldn't get everywhere. Nor did he like to become even the “father” of the participants: would be swamped by individual problems, from the complaints, from the protests of those who had not found the fuel at the established point, or criticized that note of the road-book, or still despised the daily ration of cockerels and fruit juices.

Demerdez-vous Municipality: out of poop on your own. And Thierry was able to carry on his race without much trouble: had a strong personality, gratify the good ones and laughed in the faces of others throwing there two famous judgments: “c'est l'Afrique, c'est la Dakar". But today, for his father Gilbert, the knots are coming to the comb. He has two problems, the ex-dentist: first, doesn't have the personality of his son; second, fisa and fim sewed a number of limits on him, taking away from him in fact the authorship of the race.

And so, while his Paris-Dakar has gradually moved away from adventure to look more and more like a race, Vera, Gilbert can no longer get away with the famous demerdez-vous ruling. Because there's no one left willing to get by on their own when there are three race directors, four jury members, regulations as big as a book, five helicopters, fifteen cars of the organization, two hundred TSO employees, twenty girls with theoretical assignments and a lot of time to devote to tanning. And when, especially, competitors have the impression of paying for it all of their own, this pharaonic bandwagon.

Once upon a time there was only Thierry, to walkway with his beautiful white jumpsuit as if he were reciting a movie. Now there are ten, Thierry winds with the same prosopopea and the same dreamy air from dune heroes; and you don't even know what they're called or what they're going to do with it. But the most irritating thing is another: TSO is undoubtedly more efficient, but it is nowhere nearer to the participants and their problems. If a team manager is alarmed that one of his drivers has not arrived, you will have to contact a journalist friend to be benevolently welcomed by the research manager; if a photographer wants to know exactly where the special test is coming from, to go to work there, will get romantic answers like that “follow the wind” and no precise indication.

And so on: those of the organization seem to live suspended in mid-air between the African countryside and the pure lyric. A mindset that infects. The French doctors themselves, collected by the two associations AMS and SOS Assistance, suffer from it in alarming terms. When the body of the hapless Charles Cabane was transferred to the plane of repatriation, removed the doctors' tent remained a large pool of blood on the concrete of the huge hangar of Gao airport, there in the middle in general disbelief.

To those who did not want to believe that it was the blood of the poor truck driver, a doctor confirmed by shruging his shoulders with indifference and casting a distracted glance. A doctor who certainly, in his hospital in Nantes or Lyon, conscientiously carries out his work from February to December; but when the Paris-Dakar arrives, part for the adventure falling into the part of the desert warrior: forgetting respect for the living and the dead, the most elementary hygiene and civil coexistence standards.