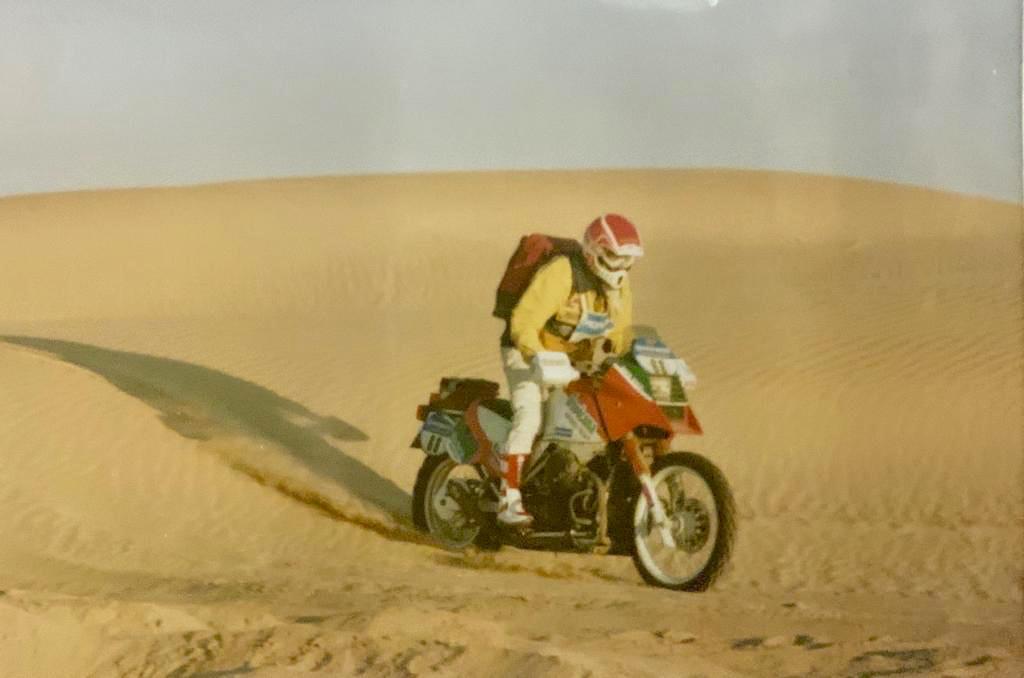 Tessalit (Mali) — The Customs Officer of Niger, basque green on the head identical to that of our Yellow Flames, had just finished asking for the ritual" cadeaux, monsieur" (Gifts, Sir) in the purest local style. Shirts (also dirty and used), skidded trousers, Stickers, Cappellini. All is well to squash customs operations and quickly earn the exit of the airport where you are then assaulted by a multitude of indigenous people and children who offer you services and items of all kinds of local crafts.

Dressed as an indigenous, sells souvenirs but it's Claudio Torri, Italian desaparecido pilot

Some are so good at carrying your bags that if you don't follow them as one 007 you end up at the bivouac without a tent and sleeping bag. But this is also part of the game of the 'Dakar'. After a few days of Africa these characters become an integral part of the environment. So, the other day, upon arrival at Niamey few have noticed a guy dressed in blue who, with a small bird mounted on a strange wooden support, recited 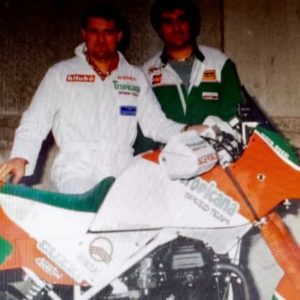 "cadeaux", Cadeaux, Monsieur. Only when it has passed through the exit Serafino Valsecchi, guzzi mechanic in Mandello Lario, the Italian group realized that that guy dressed in blue, in pure tuareg style, was not an indigenous but the thirty-seven-year-old from Bergamo Claudio Torri.

Because let's talk about him? Simple: sunk into the sand of the first special which from El Oued led to Messaud Boulders of the Lombard pilot had completely lost track. His mechanic, who followed him with the airborne-transported troops of the Dakar, had searched him in vain in the rankings, to bivouals, africatours refreshment places and at the organization's aircraft. For a whole week he had tried vainly to know where his assisted. Then he had almost resigned himself: the hours and days passed and of Torri it was only known that he had entered the list of retired from the first special.

In short, the total darkness. Now the concern accumulated in days spent rolling his brain out of concern was all of a sudden vanished. A long hug, a laugh that attracted the attention of Nigerian customs officers and here Torri reappeared on the horizon of the "Dakar", just as there was gone. "I had stupid problems with the bike because I'm a fool — explained the bergamot problems that held me back: the broken rear wheel, i missed the rays, and then the clutch k.o. per kilometre 183 of my Dakar '88 they ended up knocking me down. In the Middle of the Desert, covered up on the dunes".

Torri, bergamot who says to be an architect, was the only competitor at the start of the "Dakar" with a Guzzi motorcycle, a 750 twin-cylinder prototype made in mandello workshops under the direct advice of the pilot-amateur. A motorcycle that had intrigued the Italian audience since the departure of Lacchiarella where the list of members was: Number 66, Claudio Towers, Moto Guzzi Tap. What that tap theme meant? Certainly not the name of the sponsor (Tropicana, a soft drink) but more simply 'tuut a post', that is to say 'everything is fine' in Lombard dialect. 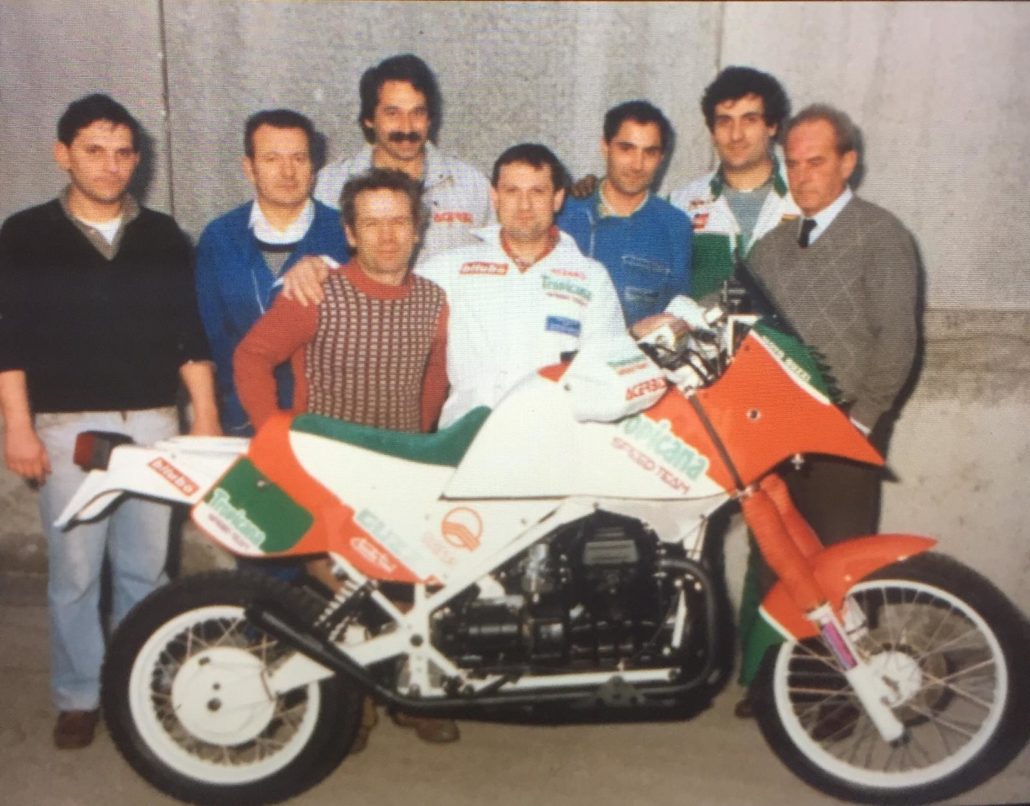 Africa and the sand then took it on the task of disproving that optimistic acronym: and poor Guzzi sank immediately and Torri had to abandon all hope of reaching Dakar. "But that's not why I didn't have fun - says the singular pilot surrounded by Italian mechanics and competitors. — This is a race that makes you have wonderful experiences even if you don't get to Senegal. I, for example, spent three days in the sand of the first special. And I've seen all the colors. First, two broom trucks came through collecting the pick-ups but they couldn't give me a ride. They were overflowing with people who had retired. There wasn't really a place on the box.. They told me: “Let's go back” and they left me there a survival ration over a little bit’ of water. And my boys, i suffered a cold of the accident. I couldn't even stand something like this when I was a pastor on the Bergamo Prealps.".

Three Days in the Sand, a really out-of-the-ordinary adventure, what's more in Algeria, where January is particularly pungent. "I found myself – continues the desaparecido — with a French planted in the ace by his Toyota. And we've seen some nice ones. For example, a service car with two broken bridges has arrived. It was a Range: his two pilots realized that not far away, covered up and with the clutch out of order, there was a similar car abandoned by a Belgian crew. They didn't think about it for two minutes., they went down, han-no disassembled the pieces they needed from the car found, they mounted them on their and then? And then they thought well of firesare the jackaled machine and they left at great speed..

The race to Senegal, In short, offers almost splits from criminal code. "And that's not all! — exclaims bergamot. — Another French, competing with a Yamaha, arrived with the engine in pieces. He was losing oil from all sides, could no longer continue; he waited for the truck that was assisting him, where he had loaded all his spare parts. He could have repaired his motorcycle instead he thought well to load it on to the vehicle that helped him. Then he must have thought there were too many bikes of competitors around, withdrawn because they didn't physically feel like continuing, people who had abandoned their means still in efficiency. This character, beard and mustache, took away his license plate and race numbers, replacing them with those of a Honda motorcycle. 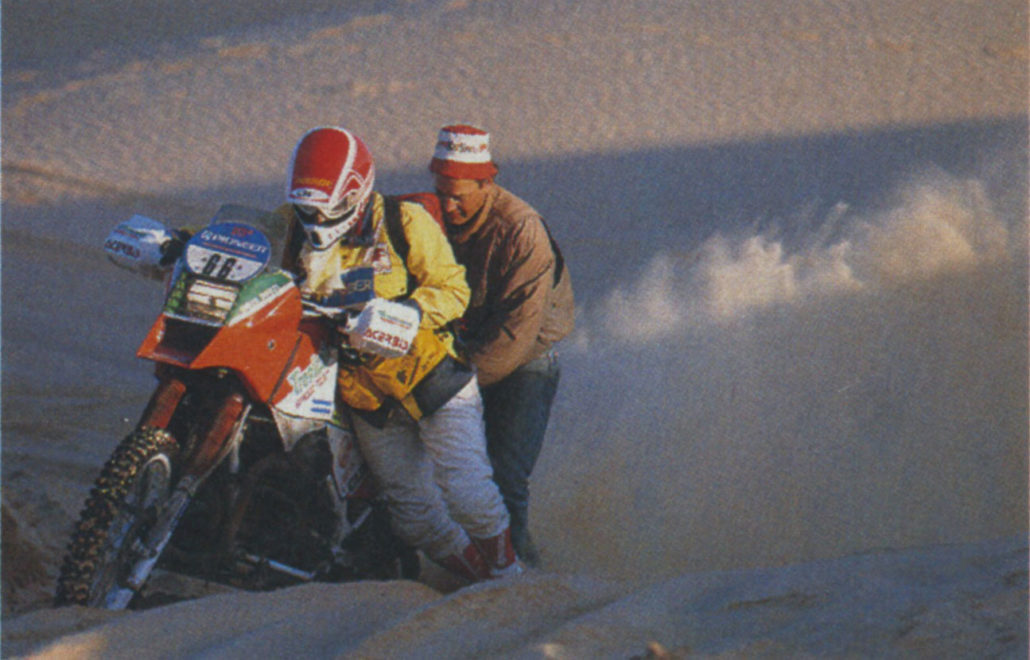 “For a motorcycle… Given, I can also betray my beloved Yamaha…” told me giggling, moving away in the sand and dust.. Science fiction? Or Torri possesses a very fervent fantasy, Galloping? "No, No, — tells us the bergamot — I assure you that these are scenes that I have seen live: the Dakar, scenes like that, captain at every stage.. It remains to tell the unique adventure that the Italian pilot lived to reach the capital of Niger, Niamey, and get out of the sands of the first special.

"After three days I finally managed to get on the truck-broom, we traveled about forty kilometers, meeting one of those giant trucks that do the oil exploration, truck 8×8. I was on the box with Ditches and with Consonni, drivers in the race with the Mercedes Unimog who took care of the assistance of Honda Italia. We got out of the broom truck, preferring to pass on that other means. A vehicle that was driving at most at 10-15 kilometers now. And I'm not telling you what adventures: Punctures, breakage of various gears: to recover my Guzzi Tap, The Range of Spanish Canellas and the Unimog of Honda, we took three days. 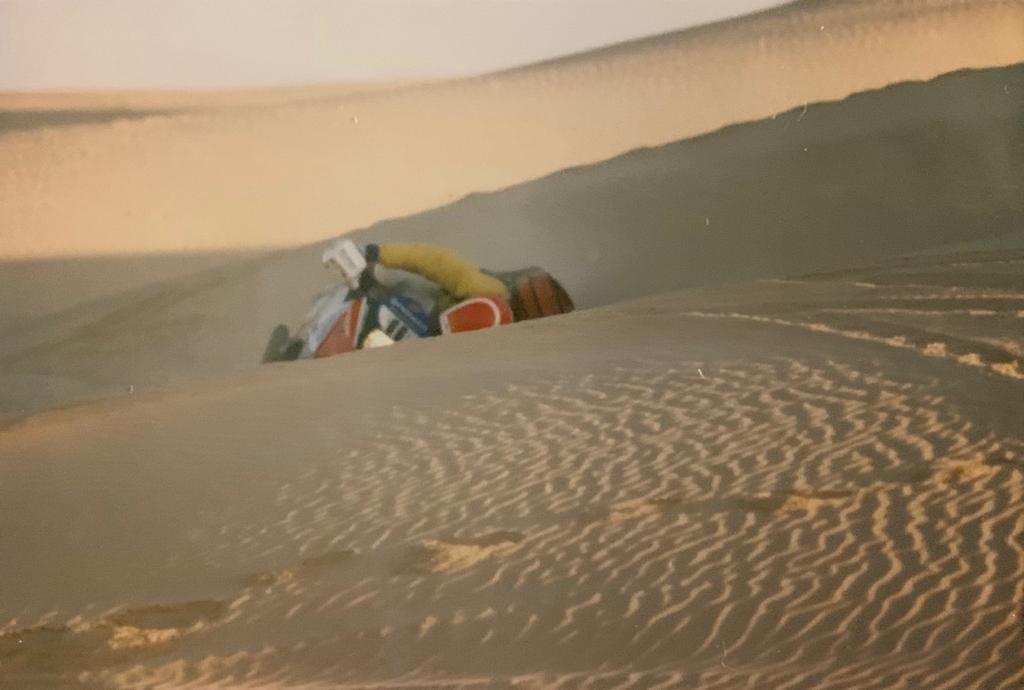 Those Algerians, with that very old truck, when the Dakar arrives, stop work for Americans looking for oil and dedicated to recovering abandoned vehicles along the tracks. They also do good business.. In short, it seems that this Dakar offers the possibility of digressions or experiences even without arriving on the white beaches of Senegal: "It is true - he does the bergamot - the race offers you a thousand stories, thousand cues. Those tuaregs were really nice to us: they prepared us the couscous, they cooked bread in the sand, they gave us a drink. And’ it was a really nice experience. Even a company. Because for them the interpretation of time is beautiful, especially towards us Europeans who are used to running all the time. There is no such mentality here.

And maybe, overwhelmed by the pleasures of African rhythms, Torri did not bother to give signs of life at the Dakar caravan or even at his home. "I had thought of getting back on the road with my bike to Algiers, once I fixed it. Then I changed my mind, and I came here on the plane. I left the bike to Massi Messaud for a few days. I warned home? Yes, i phoned the day before yesterday, i talked to my wife, then with my daughter, who just turned six. I greeted Valentina. He told me I'm the usual… fool'. Torri stretches out to talk about his wife Sandra, who she said last year she would resent because her husband hadn't left for the Paris-Dakar: "But you understand women? One year you participate in the Dakar and they make you a head like this because you come to Africa; the next year you don't come, and get angry for the reverse reason. This year, Anyway, I had decided to participate. And here I am, between old friends". 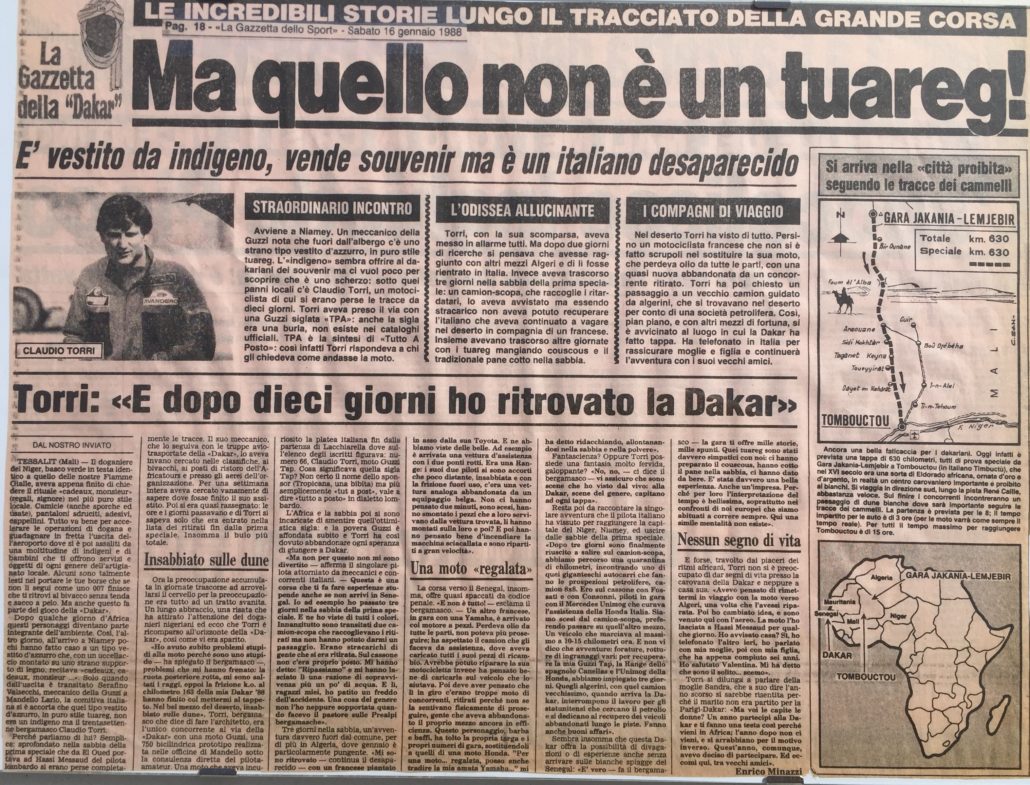 Cyril Despres, the career of a Dakarian myth
Scroll to top