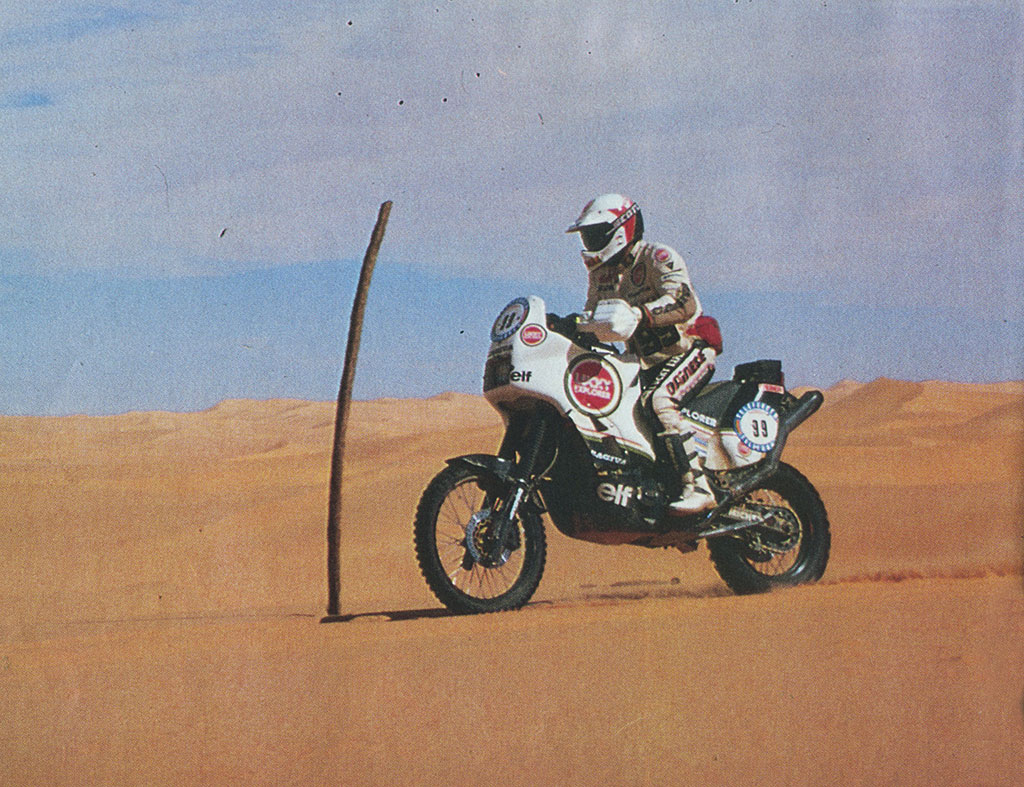 NIAMEY – Is the hot afternoon of 14 January, in the morning the competitors of Paris-Dakar have abandoned the comforts of the capital of Niget, sharing a breeze for Gao. The pool at the luxury Hotel Gaweye only riders withdrawn from the year's toughest race and some reporter; in a dozen of the many rooms of the hotel injured people complain about waiting for flight scheduled for the night of the following day that will bring everyone in Europe. Among the Palm trees and the cool pool water, in a scenario worthy of Simon Le Bon, We will have a long talk with Alexander «Cyrus» Dalia, one of the fastest men ever seen in action on African roads, in the limelight, Unfortunately, to be one of the riders disqualified from TSO at the start of the stage Agades-Tahoua. 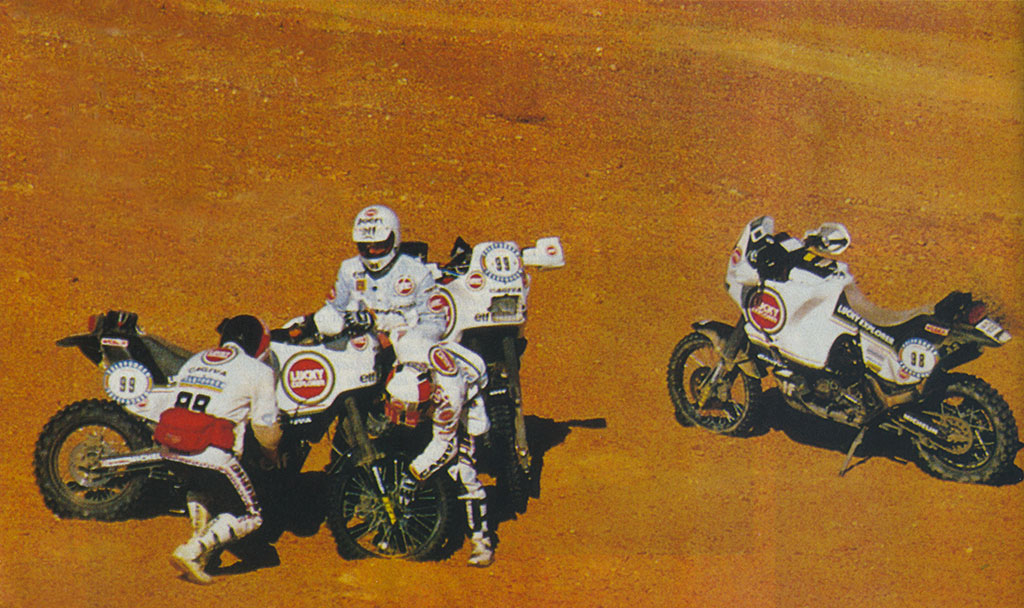 De Petri is much more relaxed than the morning of 13, When Patrick Verdoy not handed him and Gates the roadmap, putting them so out-of-competition. That morning at Agades I had almost afraid to interview the pilot of Cagiva, furious about the exclusion of the race. By the pool, though, the tension inevitably Saeed and Cyrus proves to be more talkative and quiet at the microphone of my recorder. The first question is of course dedicated to the "situation" in the stage of 5 January.

Then Cyrus, the bike has been replaced?
"No, I had a problem with the clutch and I had to stop. Shortly after they arrived Gates and Picard and, together, We started working on the bikes. The Cagiva has the clutch handle of type 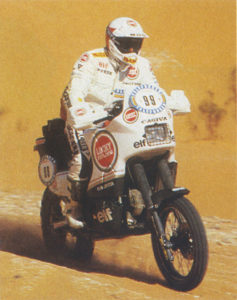 plumber and work on it is very laborious: There is also to bleed. Let us not forget that it was the first special stage and we were quite nervous. In that moment time seems to fly when reassembling the hulls of confusion and we did three bikes».

But don't you have noticed that the helicopter of the Sierra (the company that films the exclusive Paris-Dakar) you ran over your head?
"Certainly,, and there was nothing wrong, even we noticed that the operator was leaning out to recover». You have been disqualified based on photographic evidence and filmed, but your motorbikes have been verified in the evening, the stage finish? "No, Neither night nor on subsequent days».

What exactly happened on the morning of 13 on departure from Agades, When you have been put out of the race?
«I was presented, like all day, the briefing, but before this started I realized that the compass does not work and are then returned to the “Villa” Cagiva team had rented in Agades, to remedy this problem. Made the replacement of the instrument are returned upon departure, the briefing had already ended and I noticed that everyone was looking at me. Before you ask me the reason for so much attention I came to meet Gates, I said we were out of the race and that they wouldn't deliver the roadmap. I thought he was kidding, but then came the confirmation of Auriol. Anyway I told Gates to follow me until the start of the special stage. Arriving at the departure Verdoy told us that if within two minutes hadn't returned to Agades would also disqualified Auriol».

How you react to this news?
«By disappointment at a decision which I define shocking that ran counter to what I thought of the TSO, an organization that I respected and in which I had the utmost confidence. The Dakar has become a big business for homes, the sponsors and the drivers it is necessary that these interests are protected by a Federation».

Maybe from international, I say mischievous.
"Of course, the Dakar is an international competition and it is essential that such decisions are taken by a body that protects all these huge interests». 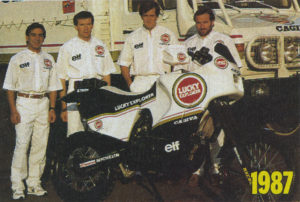 Speaking of the race has changed after Sabine how and the environment after death of the great inventor and soul of Paris-Dakar, What do you think?
"Even with Sabine, or better under his direction, questionable decisions were made, as the penalty imposed on Peak two years ago. Last year during the stage Ouargla-El Golea, There was a complaint against Honda France for a supposed change of bike, but they were not carried out verifications. In any case, this ninth edition of the Dakar is beautiful, great technique with special tests to no end and no nighttime stages: a beautiful and well organized race. What I don't think would have happened at the time of Sabine's do run a pilot for six days, leave to rest one day and then ban him, What happened to me».

You have been put out of the race on the basis of evidence filmed and photographs, you have probably tried to save the situation and continue the race. What happened and, especially, What will happen?
"Our athletic director Azzalin asked to do share Gates and me maybe letting us run sub-judice until Dakar, but Verdoy is still on his decision (wrong for me) and did not accept. Meanwhile, to protect the interests and image of Cagiva, sponsors and also my (Let us not forget that a professional driver prepares for Dakar for about 8 months) you will end up before a court».

You want to maybe the head of Verdoy?
"No, I don't care, We want only to know that disqualify me and Gates was a mistake and especially that in the future there is greater protection for Homes, sponsors and drivers».

The future of specialty care to many and inevitably to Ciro we asked the question that you feel in your environment, as a world rally championship?
"It would be beautiful — answers — and us drivers often talk, a World Championship under the auspices of the International Federation would be a big step forward, but on our part, there is still the need to deal, While Federal environments has not arrived yet effective intervention. Even when we had, After the tragedy of Giampaolo Marinoni, requested that two doctors follow us Italian pilots flying in giving us the necessary security, even psychological».

We talk about safety, for you the Dakar is a safe race?
"The Dakar is a dangerous race. Is the actual product to be, almost a cross between speed (for medium to high) and cross (for the ground on which it runs); In addition nobody knows exactly all the pitfalls of the path: It's a cocktail very dangerous especially if you get lost. If you become injured off piste the risk is so much».

There is solidarity among pilots?
"Yes, Despite the difference between official and private pilots all stop if they see a colleague in distress. In this respect I feel very safe. There is a lot of humanity in this ruthless contest and solidarity on the track is so much».

Interview by Marco Masetti for Motosprint 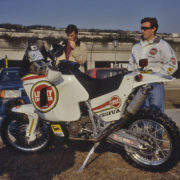 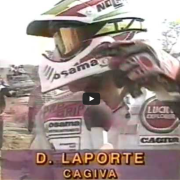 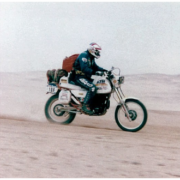 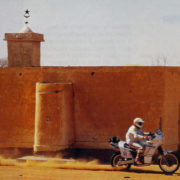 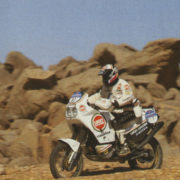 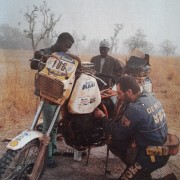 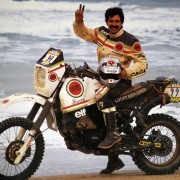 Jean Claude Olivier and his Sonauto
Scroll to top