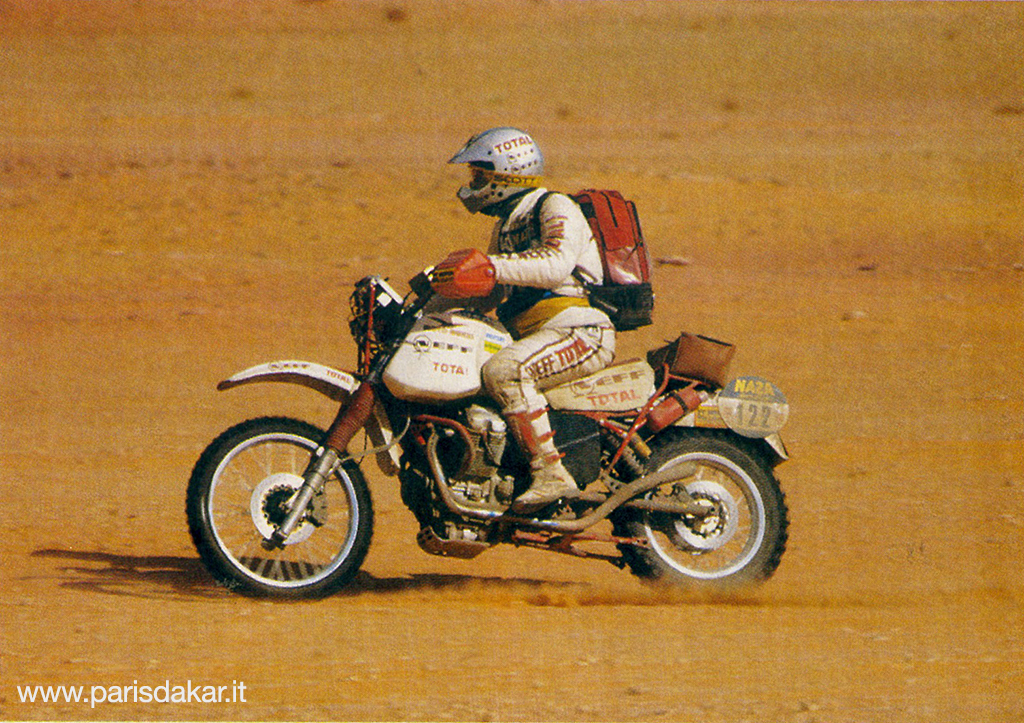 Has not been lucky the Edition 1986 the Paris-Dakar Rally for team Guzzi. Parties driven by the enthusiasm of towers, that the past year had reached relatively smoothly Agadez before retiring, the franco-Italian army composed of three mini bike (led by Towers, Rafferty and Drobecq) two Pinzgauer and a truck, all sponsored by Neff and Total, He raised the white flag already in Tamanrasset, a decidedly lower than that achieved in 1985.

"Unfortunately we have had a number of drawbacks such as to force us to take a hard decision is the comment of: same Towers probably match bad universal joints. The fact is that the transmission shaft was very frequent, so I can say that in this Dakar was more the time I was still at the edge of the track on bikes».

Without this inconvenience would be competitive?

"Hard to say, What is certain is that the engine finally pushing strong. Even the chassis was improved significantly compared to that of the motorcycle driven by me in 1985, deserve this for asking the French importer whose enthusiasm had made sure that that was a little’ my personal obsession to become a real team and with companions such as Drobecq and Rigoni. To continue would have been too painful: the bike, gimbal break apart, fine. Because of poor location of us we left rather forward and we have seen how difficult it was for the opponents collect us. Then, Unfortunately, the driveline is incredible and points to us were kicked in long waits. After repair we'd pick, but we pulled so much to solicit the clutch just overreacting, so were other stops. Personally I considered demeaning the situation. The Guzzi is not a bike that can make up the rear in this way».

One of the bike is also destroyed, because?

Despite this “Caporetto” We see that the team is still held together here in Niamey, How come?

"We do it for the sponsors in spite of everything we wish to introduce ourselves on the beach in Dakar to thank them in confidence. I think they realized that our liability is limited and that the team has done everything possible for that matter I think the intention is to continue because the Guzzi still has potential to exploit».