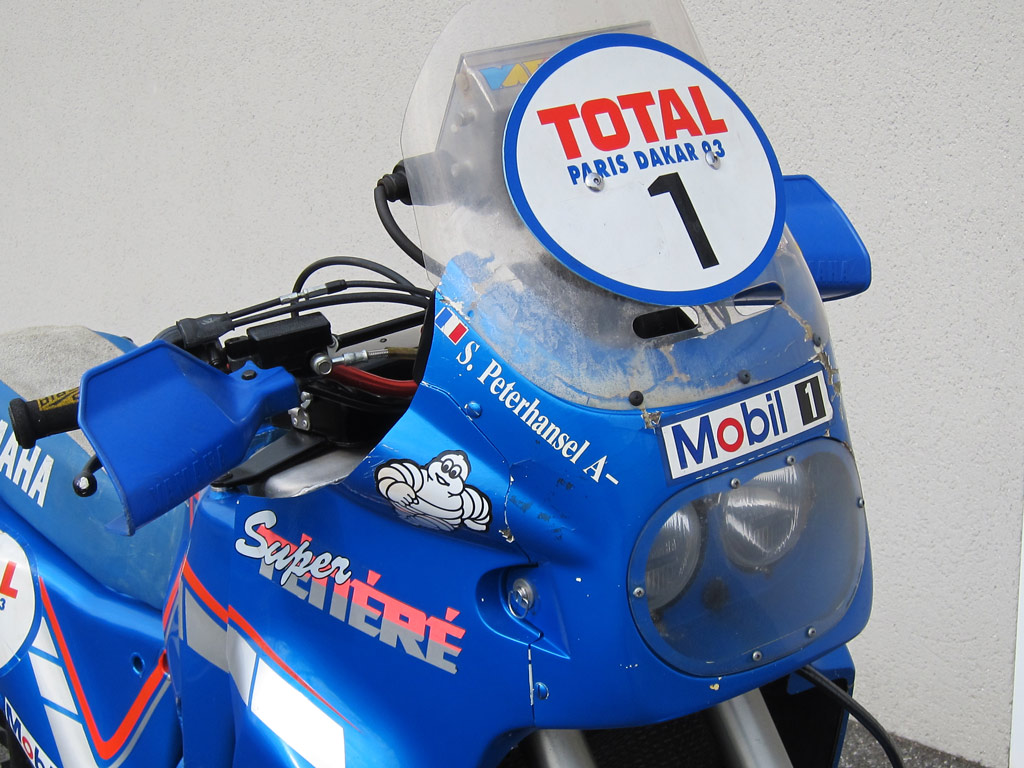 In 1993 We ran the 15th edition of the Paris-Dakar, tough competition through the African wilderness, from Paris and arriving in the capital of Senegal. Strange issue with only 46 bike that presented themselves at the start and all it has distinguished the Yamaha YZE OWD8 of Sephane Peterhansel, winner of the two previous editions.

A truly unique piece, even more so than rare this Yamaha which has been for sale on the site www.classic-motorbikes.com.
The motorcycles for sale was the very official version from 850 CC, established on the basis of 750 Road but completely revolutionized by Yamaha Motor France in collaboration with the Japanese Racing Division. The engine was a parallel twin, as tradition, and the front panel with the fuel tank the quaint oval headlight lens headlight, make it undoubtedly one of the most beautiful dakariane of the years ' 90.

This bike belonged to the collection of Yamaha Motor France for 20 years It was not remotely touched after crossing the finish line in Dakar ' 93. In essence, It was a motorcycle kept and well washed.
The scratches, the peeling paint on some points, The fairing and the tail broken, the carter ruined by the defenders of the boot, they are all “battle wounds” telling the story. 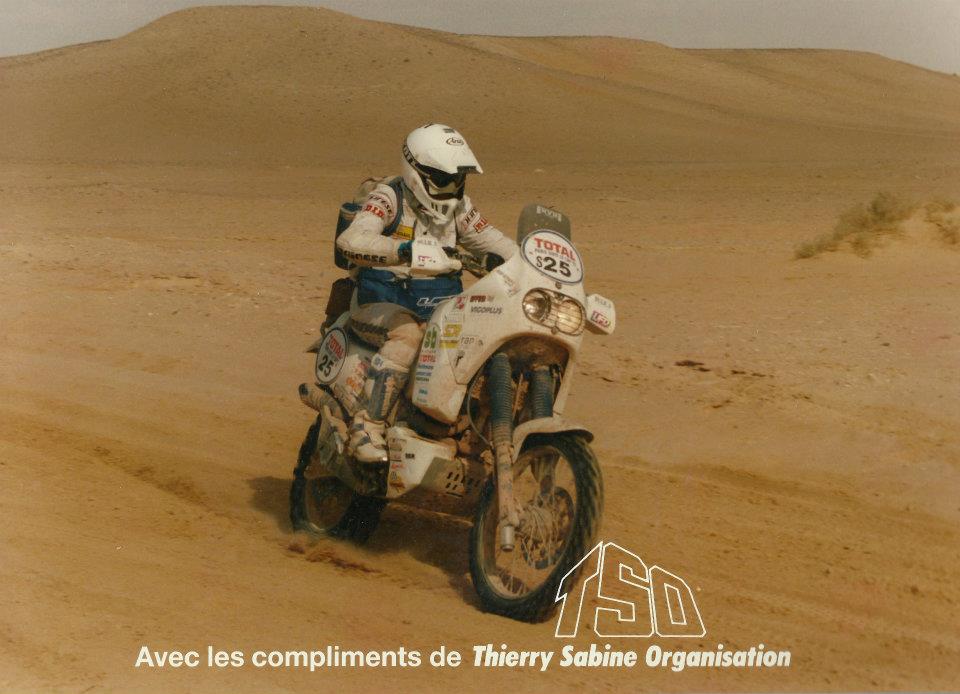 Category Malles Bike: i.e., the organization takes a case with your spare parts and, I think, two wheels. You in a field set, lighted, with various services type: gazebo, compressor, idropulitirice, welding machine, mechanics of the organization when available, place for tents, showers ... you have to deal with it to do everything.

Pretty much what in Africa in the years ' 80 and ' 90 was a semi-official pilot treatment. In those years the private started with Backpack, and at most, some spare parts on a truck. The most "rich" had a mechanic along with other pilots and some extra spare.
Then there were ten "officers", but they were on a different planet. I could feel lucky, Thanks to a friend, I had loaded on a truck in the race, a case with oil, filters, inner tubes and a replacement motor. And a bag with some clothes over the ones I was wearing since the verifications in Rouen.

At the second stage in Libya on my friend's truck Stefano Pirola Lissone breaks, decide to save what can be saved on my way home. All I managed to do was deliver the bag with clothes in a car by a French team, a Toyota Team South which remained very private walk two stops after. Just in time to leave the bag at the bivouac, the sleeping bag no, What if they left him in the car ... I came months after home with greetings and gadget South Team. 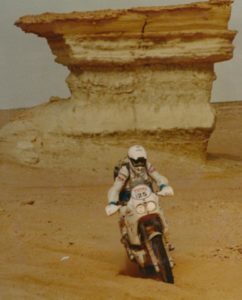 So at the bivouac of the second leg in Libya, I found myself as I was for days, only boots on the feet, without a drop of oil for motorcycle, without sleeping bag (the tent was not expected), filters or anything for the unexpected. The clothes that I found were the last thing I needed, I had been traveling for years alone without providing anything for me, just for the bike, and see me deliver the bag by two gentlemen of bad luck on 4 wheels, It seemed a tease, but they were so beat up that ringrziai, We spent a fine evening together, We exchanged addresses us by promising a nice car and motorcycle team for the following year (dreams from bonfire under the stars).

At the bivouac of the first stage I couldn't even find my truck, the chaos was total, a storm of wind and rain had reduced the area close to an airport in a quagmire of mud and sand. I remember Montebelli and Mabuya, friends who I sold the bike, maintain their 660 under a makeshift space from flood Yamaha BYRD. I I wandered until dawn trying to lie down on the plastic sheeting of whom had managed to open the curtains below a large gazebo. From there onwards, until my abandonment for breaking change between Keep and Chad, I lived by tricks, to latch around, to sleep wrapped in the tarp by survival curve under trucks. 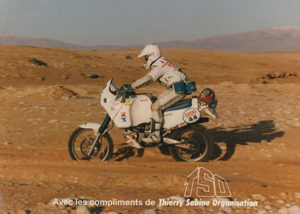 Read today that you are tired because you're sleeping 3 and a half hours, because "touches" the Malles Bike, It makes me smile.

In the picture, are the year after the second stage in Morocco, Guido right foot still on the engine, the platform remained between Montpellier and Marseille maybe got stuck in the machine of Paul Maurice, a drunk that he cut the road in transfer. I left around the ditch all the tools, the headlights, Hull parts, pigtail, waterproof suit (It was raining there, too ...), the little finger of his right hand and two ribs. See Franco Picco and Edi Orioli help me and, a backslapping telling me "by hold on", He let me continue, always with my cash from an individual to seek a platform compatible to be welded with the brake lever stub that I had left.

I left there too, in Algeria, I arrived in late stage over the departure of the day after, 980 km inside and outside the great Western Erg, the classic stage of pruning that relieved the TSO in view of the entrance in black Africa. From the day of the accident in France I slept (bad) just that first night, the ribs were waking up., for four stages do not I lay ever. At the start of each stage doctors, they knew of the accident, I made a visit to see how I was put, pressure, eyes, reflections and other rubbish that I avoided again, just to put things in motion (lights required for es.). 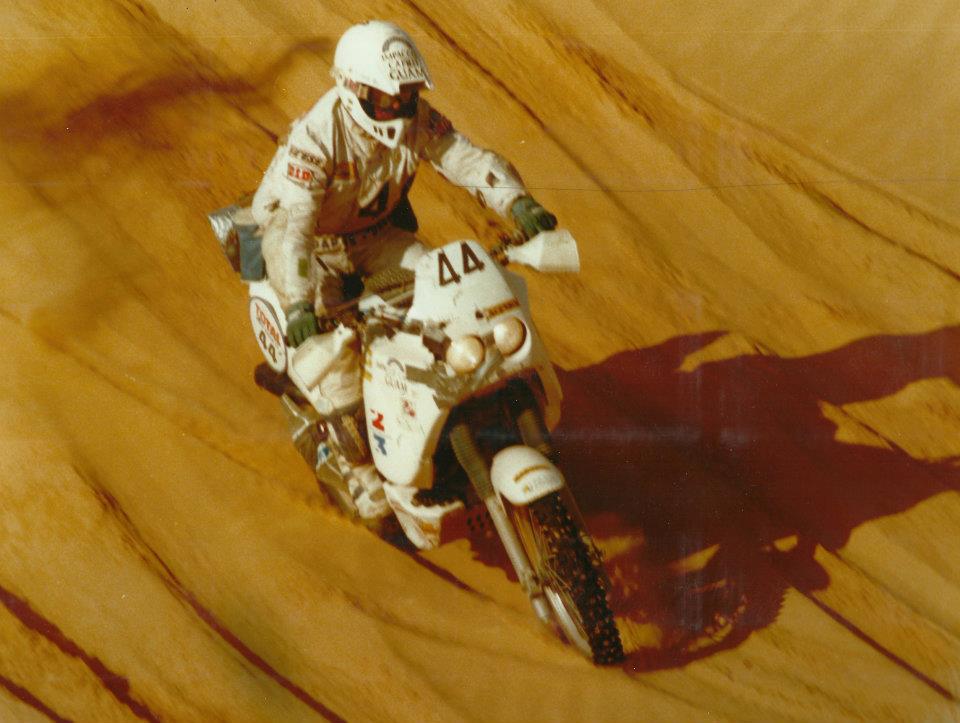 I went home in motion as in my travels, with Tunis-Genoa, fitter than when I started, with the bike crushed but finally in place and efficient.

In ' 97 I discovered the category wellness Malles Bike. To have my mechanic still don't speak. Find me all those services at, It seemed another world, clean the filter with compressed air is important stuff, have a mechanic and a tire shop that sooner or later you over your wheel or spare part (only for owners of ktm at time) sgravava me a lot of hours of work that I could take on the road book and make that beautiful work with colored highlighters that you often see in today's pictures. Always sleeping cheap anyway.

I dropped out of the race between Mali and Senegal before hurt seriously, I took too many risks to keep going at all costs, We left from Dakar and the heat was too. Well for me that I was the hair of lucidity to decide to stop. Bad went to a French colleague who saw him on the ground with the cars around on a red track with ruts funds as the whole wheel. At the bivouac you knew was dead and I was impressed, perhaps too, or fortunately. 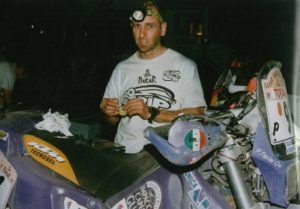 Even today this Dakar us stories and characters to the limit of endurance, I like less than the Paris-Dakar, but it is still a good race. Pity about all that "civilization" that I see around the pilots, too many people, too many services, too all (at the bivouac turn even of fine ladies ...).

Africa and the Sahara are unique, Luckily I tried. 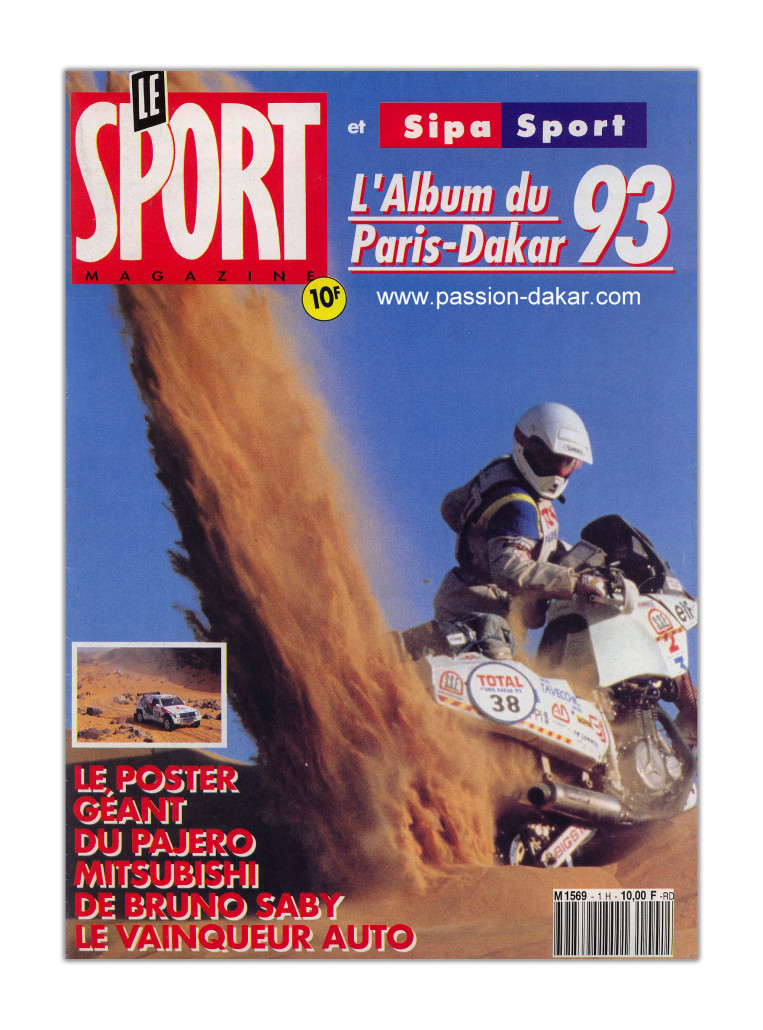 Cover dedicated to Andrea Fumagalli on Suzuki during the “disgraced” Dakar 1993 He saw starters just under 50 enrolled in the motorcycle category. 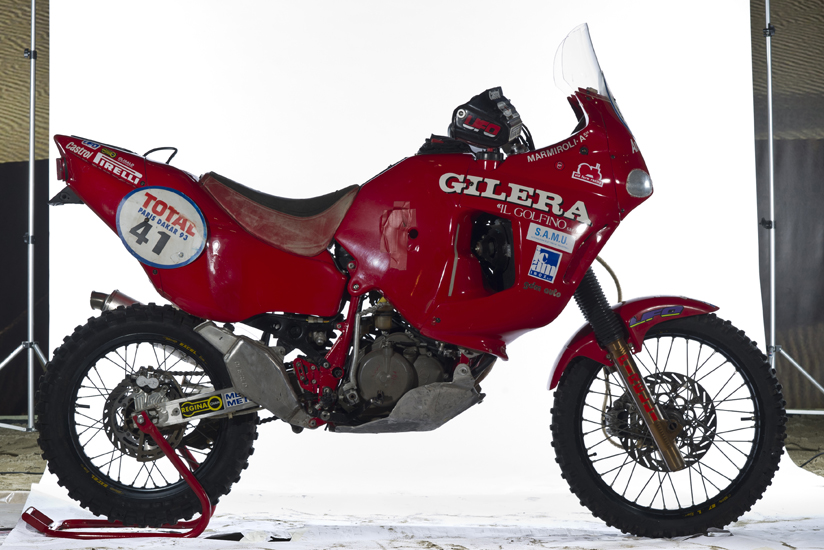 The 1993 It's an unusual year, with the minimum number of members in the Paris Dakar (only 46 motorcycle starters). A beautiful Flash will give it to you anyway a pilot Italian, Maximum Maddox, 30 years, dealer with a passion for mechanics and adventure, that will give the Gilera to victory in 9th stage to Atar (Mauritania).
Ranked second in that stage, detached only 19 seconds, another Italian: Maximum Montebelli on Yamaha.
In the eighth through tenth General Montebelli realizes what Maddox.