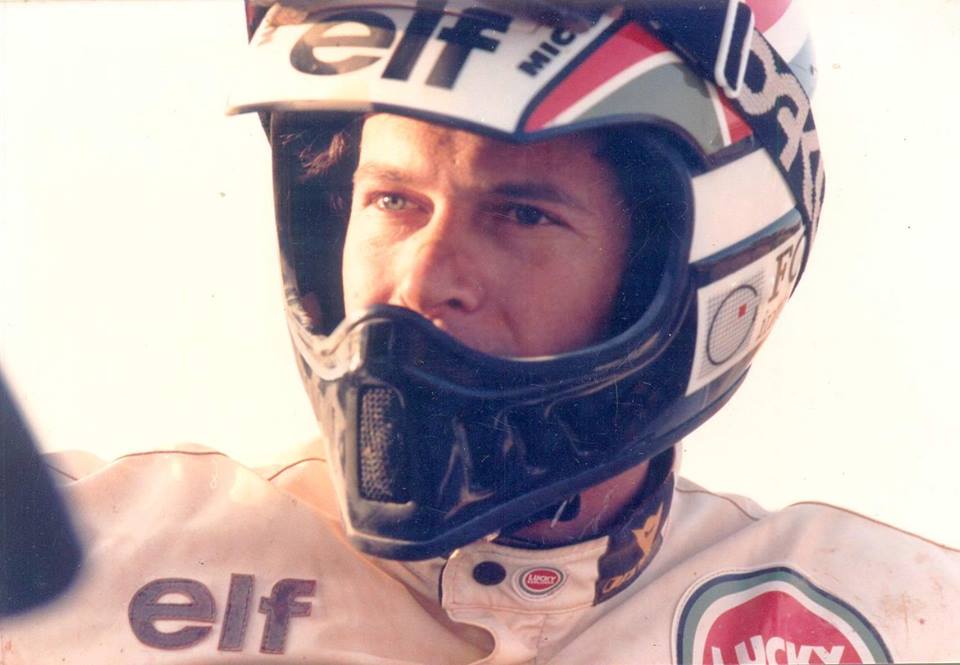 Nouakchott (Mauritania) – “Africa I made it practically by myself and this more than a merit is a trouble, the biggest trouble that can happen to those running a Paris-Dakar. I still don't know if I'll be the winner, I hope for the Cagiva, for the Italian public who expect to see their own bike for the first time win this race, but it's good for everyone to know how things are”.

Hubert Auriol, a nice big boy French, always cheerful, elegant in manners and in speaking, looks more like a fine theatre actor than one of the “Beasts” who face every year this walking madness that is the Paris-Dakar. Auriol is a veteran of this speed race along deserts, savannas and mountains, Saharan Africa knows every stone, every dune, every mirage and every arcane deception. Yet the other day he too fell into one of the thousand and unexpected traps of the desert. 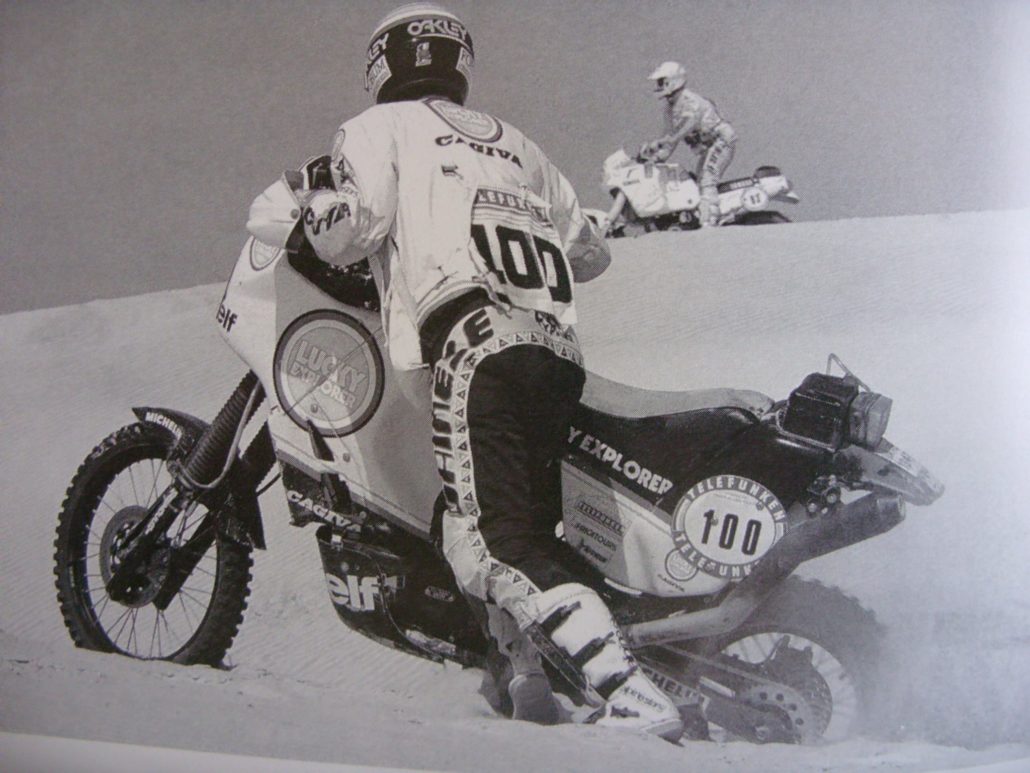 In northern Mauritania runs an old mining railway. The world's heaviest train passes through: five locomotives of over 3,000 horses each and 10,000 tons of iron on the wagons. And every time it passes, small shards of track, sharp as swords, squirt at the edges of the mass. Auriol, Vatanen and many other competitors for fear of getting lost in the desert wanted to follow the railway route. But the punctures came in bursts one after the other.

Since traveling in solitude, due to the questionable disqualification of the other two Cagiva drivers, poor Auriol lives with the nightmare of punctures. Because in this race l’ racing assistance can only provide it to teammates or other good-hearted competitors. So those who are further down the leaderboard end up slowly cannibalizing the poor bikes of their comrades. Today a wheel, tomorrow a clutch, the day after tomorrow a carburetor.

But Auriol is just. In the previous days he had also tried to mount the magical Michelin tyres, that instead of the inner tube have an expanded rubber doughnut. La Michelin, though, had studied them for Japanese motorcycles having not paid much attention to the Italian motorcycle company. So on Auriol's bike that donut got too hot, until it becomes a mush. And then the pilot French not if the’ is felt more than risking. He put on his shoulder a little’ of chambers d’ Air, like old cyclists, and went on alone to fight the battle with his rival Neveu.

He had a’ hour advantage over him and with five punctures if l’ it's eaten almost all. “In hindsight – he said – it's easy to choose, but the night before I didn't feel like taking a risk”. Yesterday, in a’ other hard stage all to the compass, managed to get glued to the rival with a little trick. Charged more gasoline, determined never to stop for refueling. And there’ he did. Neveu, on the other hand, stopped, he started on the attack but at the finish line he had only a handful of seconds. 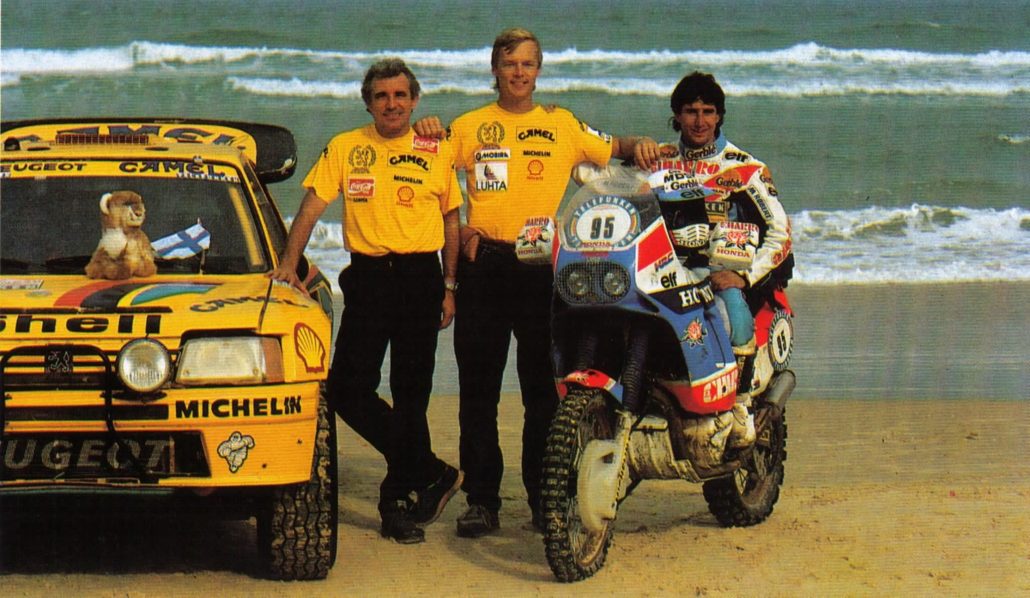 A win by Auriol for a house like Cagiva would be a boon. “What can make a Dakar – says Roberto Attalin, head of the Italian team – I wouldn't know how to quantify it but one thing is certain: a victory at the Dakar is spoken in every remotest corner of the world and we have against all the’ Japanese industry. Just over a hundred people against thousands of specialists”. Right now 9 poor minutes divide Auriol and Neveu, Dakar is likely to end at the end of the year’ last moment.

Today c’ it's a very difficult stage, still all to be “Navigate” compass in the savannah of Senegal. The two are too experienced and too big to resort to tricks, but this year in the face of the hundreds of bewilderments in the desert, there are even competitors who have opened the hunt for the little boy to run for cover. Small, Light, son of blacks or Bedouins doesn't matter as long as he knows the slopes well. If they load it into your backpack and off to 180 per hour.

Better to have some’ weight extra but safe driving, so so at least they tell them. In cars, a’ other victory of Tambay, New1, which, however, does not bother Ari Vatanen's Peugeot that is the leader of the. The Peugeots are technically unbeatable for the power they have, but in the last few days they have risked several times to lose this race for the’ African inexperience of the Finnish pilot and the contrasts between him and his navigator, French Bernard Giroux, Tf1 commentator.

Before the morning start Vatanen sits at the wheel and in religious silence reads a passage from the Bible. He makes many good intentions but then in the race he does not trust his navigator and makes his head. After all, even his old fellow rallies had had had enough of him and his bad temper. On Sunday, Vatanen got lost in the desert, carrying other 104 cars hoping to smash it following the likely winner on a safe road.

Result: all stopped until late at night, they got caught 10 penalty hours. On Monday, he lost an hour on his direct opponent due to a puncture, French Zaniroli aboard a Range Rover. The ranking still says Vatanen, but it takes little to devil a victory that the house French has built with months of hard and skilful work on a car that, after being the queen of the rallies she is about to become the queen of Africa, as are the old ones today 504 where many of these countries continue to trudge overcharged on tracks where there are no other means of transport.

But the Dakar is not only the’ adventure of these dumbbell or steering wheel dies. And’ Also, and more often, the antechamber of death for many others. Yesterday came a poor wretch of French who had lost himself 10 days ago in the Niger desert. Two days and two nights still, sleeping at the’ I'm going to have no more water trying under the sun to repair his bike. Death was now there at a pace when luckily he was sighted by the “truck-broom” of the desert. A vehicle that travels with days and days of delay and picks up the damned of this race. To the poor, without needing to read the Bible, we offered a shower and a bed because he didn't have even a franc in his pocket. We asked him if he would ever do a Paris-Dakar and he answered: “And how could I live without?”. 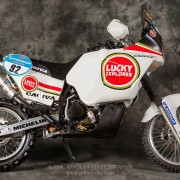 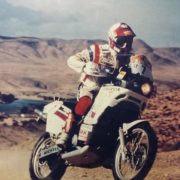 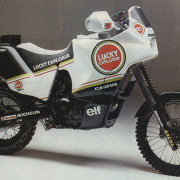 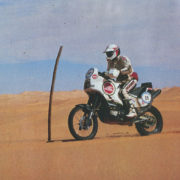 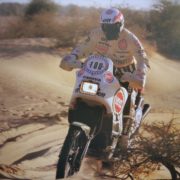