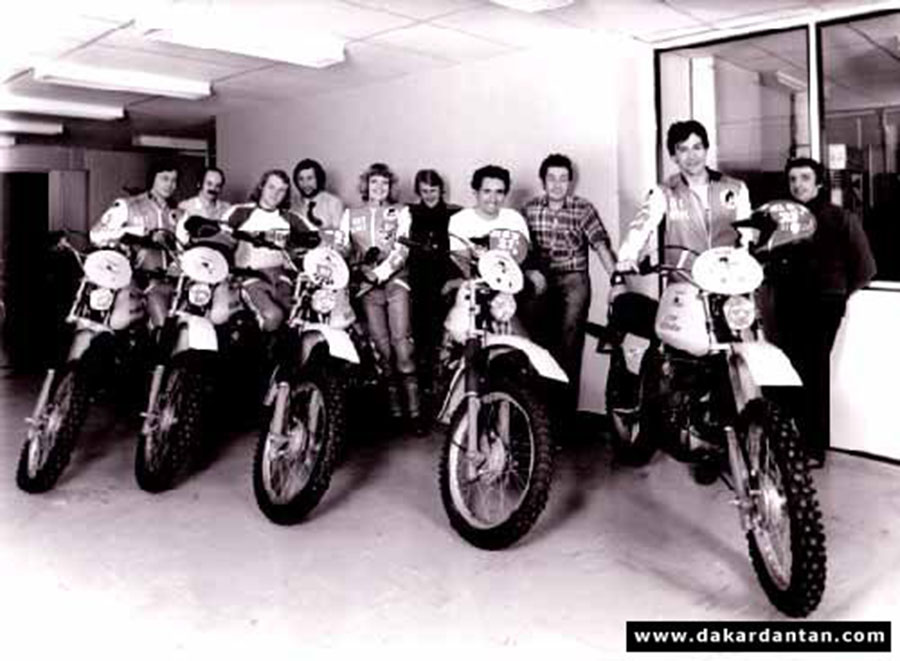 November 1978, Orly motocross field, near Paris a motorcycle is turning and is feeling with its V-twin engine and its impressive dimensions. It is a prototype, the TT500. Denis Bacholle, Director of Seudem, Moto Guzzi importer in France, he lent it to me for a few days to refine it. The bike has powerful, very stable, very robust and relatively easy to drive, even in muddy paths. Known for a problem, is the driveline which limits the travel of the rear suspension and forces you to keep the rear wheels aluminum alloy series – spoked hub conversion would be too expensive.

I started the enduro with a Pioneer Bones. In 1977 I have successfully participated in the Rallye 5-5 Abidjan-Nice by Jean-Claude Bertrand, on a Yamaha DT400 prepared by Gilles Comte. We join Cyril Neveu, Christian Rayer and… Thierry Sabine, you will lose in the Ténéré. Gilles wins the race. 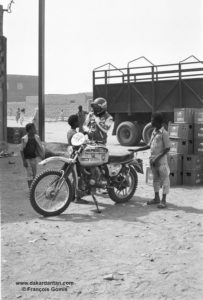 He was announced as a Paris-Dakar, organized by the same Thierry Sabine, Creator:’ Enduro du Touquet. Denis Bacholle is a passionate man and the team is a true miracle, but on the day of departure five bikes are regularly lined up at the start and their pilots were ready – Martine Rénier, Eric Breton, Piatek, Bernard Rigoni..
Assistance is provided by two Toyota vehicles that have now reached retirement age.

The race begins and we in Algeria, stages of connection: the Guzzi are fighter aircraft! Officials from Honda and Yamaha, on their single begin to look with respect. Our bikes are the best in top speed and very stable. The consumption is under control, as expected. After Reggane, the return to reality is brutal. Rear alloy wheels don't hold up, they break. The 105 mm rear suspension travel on potholes and bumps do not forgive. Martine Rénier and Piatek they crash and injured leave the competition.

I also do I perform in a nice looping, and remedy a left wrist fracture. I decide to keep this incident to myself and continued the rally with one hand or nearly. I adjust the handlebars to avoid tiring too the pulse and I install a tire back onto the rim trail that will be less stressful for the circle. We reach Agadès and while sliding alongside Martine de Cortanze, I feel that the bike collapses in the sand. Despite reinforcements the frame broke at the height of the steering column. The same mishap later happen to Eric Breton. It's time to go home. 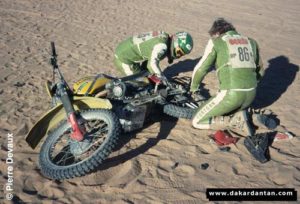 My mate Bernard Rigoni, the smiling motorcyclist from inseparable moral qualities and physical properties, will arrive in Dakar.
Jean-Patrick Capdevielle sings: "it's hard to be a hero / on this side of the planet ... ".

He's right, Jean-Patrick, certainly we are not heroes, but the pioneers, anonymous and fans, what you definitely .... Toss in the Algerian desert, withstand sandstorms without GPS, at that time it was not so easy. The Moto Guzzi TT500 demonstrated the competitiveness of twins in rally-raid, without the inconvenience of the rear rim could do great things. This bike was outstanding in everyway. It was a great privilege to lead this Moto Guzzi.

And’ has also been a great privilege to have been members of this team, United States and enthusiastic. A thought for Denis Bacholle, gone too soon. Greetings from Bogota, Colombia, friends of the history of Paris Dakar.