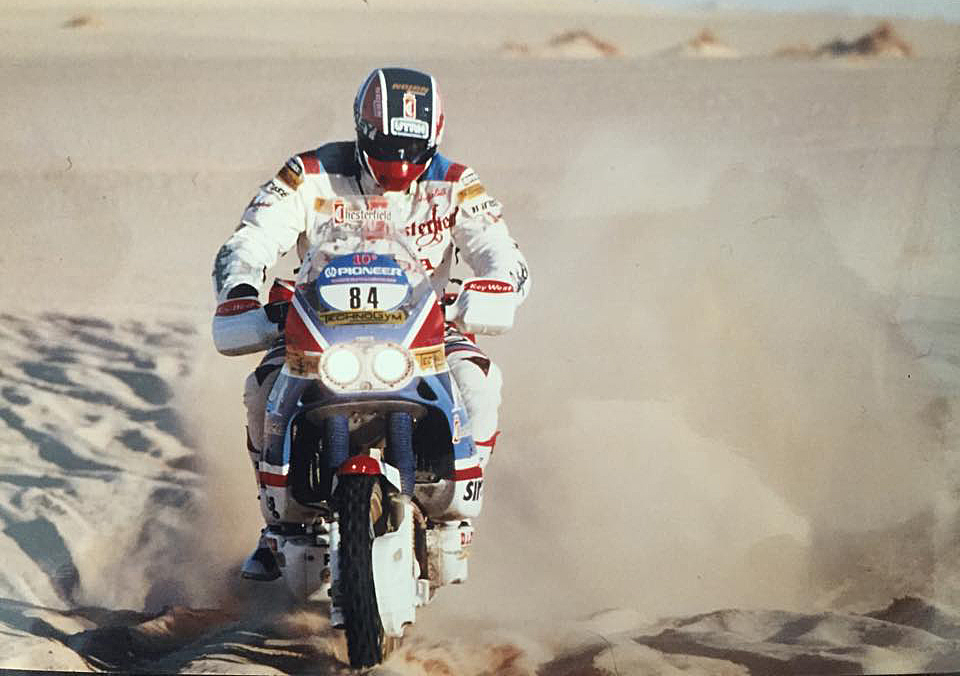 Claudio Terruzzi participated and also won the world enduro races but is best remembered for his participation in the Paris-Dakar. Claudio was born in via Amalfi along the Martesana in 1956 and he spent his youth in Crescenzago.
"Welcome home" banner displayed in the 1988 in via Padova, on the occasion of the return of Taddy from Paris – Dakar
Still very young, together with other off-road enthusiasts in the area, riding of 50cc engages in the hole of via De Notaris (in front of the Rol Oil) or at Parco Lambro. Al Parco Lambro, In addition to the classic routes on "mound", There was also a hole in the side of via Crescenzago and behind the Tennis Club that a real gym for motocross, with beautiful paths. In addition to the Park in addition to excelling with friends, There was often to beat even ecological guards, but for the guys was pretty easy, with a flat, escape the "bucks" that rode bicycles. 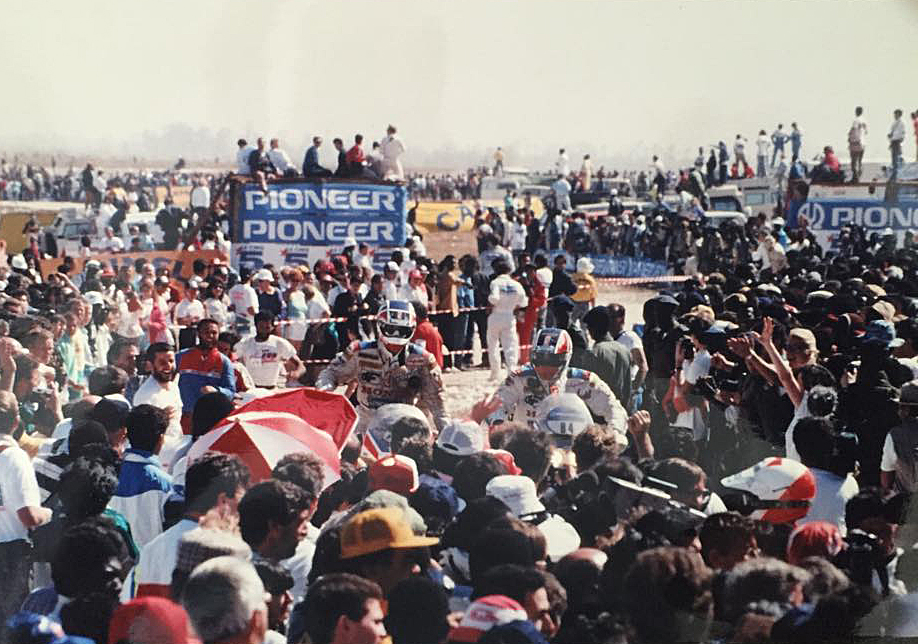 Orioli, Terruzzi and Peak, the team members of Honda Italy to Paris- Dakar 1988.
Terruzzi, for friends, "El Teruzz", He started racing in years 70 in regularity competitions with several successes, up to land the blue team. After mixed results, the 6 days of San Pellegrino was noted by Massimo Ormeni of Honda Italy and after a few positive tests became official Honda Pilot. Claudio has participated in three Paris-Dakar in the years ' 80, during the period when it was still a grueling race that ran in Africa.
First participated in 1987, riding a Honda XR 650 R, He won a stage in Goa, in Mali the 14 January and won "Rookie of the year" What better motorcycle racer newcomer. The second participation in 1988, that issue was unique for the Italians who ran with the bikes, of 183 bike on departure only 34 they arrived in Dakar and in the first five places in the final classification were three Italians: the winner Edi Orioli on Honda, in second place Franco Picco on Yamaha and fifth Claudio Terruzzi on Honda HRC NXR750R. In that issue Taddy has reported 6 stage wins and without any mechanical problems could also compete for the overall victory. 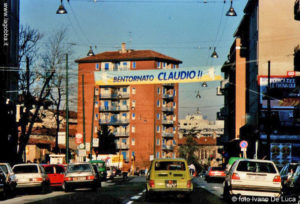 During an interview in 2012, Claudio, answering a question about his choice to run the Paris-Dakar race again if necessary, remembering those unforgettable moments, responded: "No, because the Dakar, the Dakar, never coming back. I still have a VHS of TG1 conducted by Paul Feehan, the first news was talking about Ronald Reagan, the second of Claudio Terruzzi who had won the stage of Dakar. Remember the banners in via Padova in Milan that says welcome back Claudio… At the time, the pilots were lost and there were no more, many never knew anything: lost in the desert forever. Today with the Navigator is much easier, all safer, almost boring: better make a call for enduro " .

In 1989, Terruzzi leave Honda and goes to Cagiva. The team with with Tade, Orioli, Dalia and Picard, form a potentially winning group but an endless series of mechanical problems and excessive deterioration of tire rack for motorcycles, the third participation of Tade at Dakar leaves no traces of note.
Today almost 30 years after his last participation in the Dakar, Despite meanwhile has become a successful manager, ceo of a company that provides services for the improvement of environmental quality, has not forgotten his innate passion for enduro races and for the world around them.

Attendee list and results of the Italians in the history of the Dakar afr ....
Scroll to top